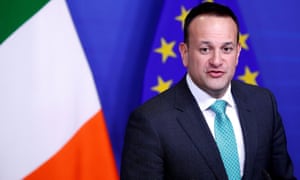 Ireland is accelerating preparations for a no-deal Brexit amid growing alarm that parts of the Irish economy could face severe disruption and even collapse – and that the UK hopes to leverage that prospect to wring concessions from the European Union.

Leo Varadkar’s government is due on Friday to publish a mammoth omnibus bill incorporating 16 pieces of legislation to try to shelter Ireland from the doomsday scenario of the UK crashing out of the EU.

The parliamentary marathon in Dublin will begin amid increasingly fraught warnings of a hammer blow to agriculture, food processing, transport and other industries.

Simon Coveney, the deputy prime minister, told the Dáil on Thursday that the European commission would bail out Ireland’s beef industry in the event of a trade war with Britain. Brussels recognised the sector’s “vulnerability” and would “support and protect” it, he said.

Coveney spoke in the wake of reports that Britain envisaged World Trade Organization (WTO) tariffs plus a system of “tariff rate quotas” for some food imports, which would favour big producers such as Brazil at Ireland’s expense.

“This would be nothing short of a catastrophe for our beef industry and would have a devastating effect on farmers the length and breadth of this country,” said Lisa Chambers, Brexit spokeswoman for the main opposition party, Fianna Fáil.

More than half of Ireland’s annual beef exports are sold in the UK. The Irish Farmers’ Association (IFA) estimates WTO tariffs in a no-deal Brexit would cost Ireland’s beef farmers €800m (£695m) per year. A system favouring cheaper imports from Brazil could wipe out Irish beef exports to the UK altogether.

“The beef industry is in the front line,” said an IFA spokesman. “If there is a crash-out there has to be comprehensive package of market supports and direct aid to cover the losses.”

The food major Kerry Group disclosed this week that it was stockpiling raw materials, while British and Irish retail organisations issued a joint warning about tariffs of 40% on food driving up prices for consumers.

Some suspect the UK government is intentionally raising the stakes for Ireland in hope that Dublin will soften its insistence on the Irish backstop and let the EU agree a compromise Brexit deal that Theresa May can bring to Westminster.

“The British plan … echoes tactics used against the government of Éamon de Valera during the Anglo-Irish trade war of the 1930s,” the Irish Independent reported.

EU officials also believe that Downing Street is trying to pressure Dublin – with little success. Brussels has been working on a package of temporary support to help ease the short-term impact of a no-deal Brexit, including aid for affected businesses.

The IFA spokesperson endorsed that view. “We are very clear that the backstop is not for moving. The idea of the backstop is to maintain the trading relationship that already exists with the EU. As far as we’re concerned we are being supported [in Europe] and will continue to be supported.”

But privately EU officials still believe it would be “complete chaos” for the first few days and weeks. Irish businesses are bracing for that.

“Call it significant apprehension,” said Paddy Malone, treasurer of Dundalk’s chamber of commerce. “Freight companies are pulling their hair out. If there was certainty we could plan. But they don’t even know what to apply for in terms of state aid because they don’t know what type of aid they may need.” 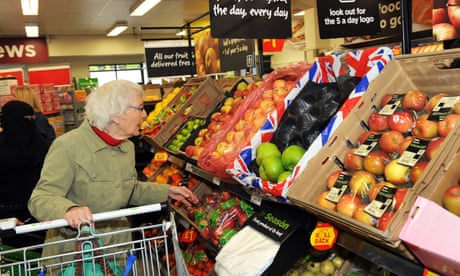 What are Brexit contingency plans for retailers and farmers?

Even so, business owners did not want the backstop diluted to try to avert no deal, said Malone. “The feeling is that it would only postpone the issue, better to face it now.”

Andrew Gilmore, deputy director of research at the Dublin-based Institute of International and European Affairs, doubted any British squeeze would succeed. “It’s impossible to imagine a scenario where that kind of pressure will bear results … especially at this late stage. I don’t see the EU backtracking on its solidarity.”

A no-deal Brexit would hurt – for instance, wreaking “catastrophic disruption” on mushroom growers – but Ireland had spent two years preparing for the worst, said Gilmore. “And there is a still strong hope that common sense will prevail.”

Conor O’Toole of the Economic and Social Research Institute thinktank said Ireland’s high growth rate would cushion a no-deal Brexit but that high debt levels left the economy vulnerable. Businesses that survived the short-term shock would then face a longer-term challenge, he said. “How do they diversify away from this huge reliance on the UK?”