Mike Pompeo says Muthana, 24, is not a US citizen but refusal to take her back likely to face legal challenge

Donald Trump has said he ordered the state department to block an American-born woman who left Alabama to join Islamic State in 2014 from returning to the US.

Hoda Muthana, 24, told the Guardian this week that she regretted leaving the US to join the terrorist group and wants to return from Syria with her 18-month-old son.

US secretary of state Mike Pompeo said on Wednesday that the US will refuse to take Muthana back, saying she is “not a US citizen”.

The refusal to admit Muthana could set precedent and face legal challenges as it is generally extremely difficult to lose US citizenship.

In a brief statement that gave no details as to how the determination was reached, Pompeo said Muthana has no “legal basis” to claim American citizenship.

“She does not have any legal basis, no valid US passport, no right to a passport, nor any visa to travel to the United States,” the secretary of state said. “We continue to strongly advise all US citizens not to travel to Syria.”

Trump claimed credit for the move, tweeting: “I have instructed Secretary of State Mike Pompeo, and he fully agrees, not to allow Hoda Muthana back into the Country!” 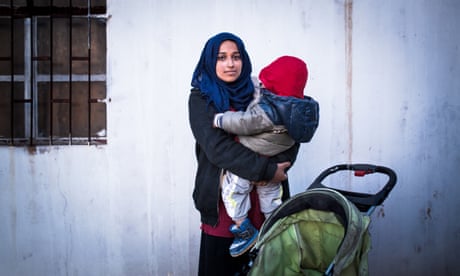 Muthana, who was captured by Kurdish forces after fleeing the last pocket of land controlled by Islamic State, has said she “deeply regrets” travelling to Syria four years ago to join the terror group and has pleaded to be allowed to return to her family in Alabama.

Speaking from al-Hawl refugee camp in northern Syria, Muthana, who was once one of Isis’s most prominent online agitators, said she had been brainwashed and had misunderstood her faith when she aligned herself with Isis.

A state department spokesperson on Wednesday echoed Pompeo’s remarks and said Muthana was not born a US citizen and has never been a US citizen.

Hassan Shibly, an attorney for the woman’s family, said the administration’s position is based on a “complicated” interpretation of the law involving her father.

“They’re claiming her dad was a diplomat when she was born, which, in fact, he wasn’t,” Shibly told The Associated Press. Hoda Muthana was born in 1994 in Hackensack, New Jersey, the lawyer said.

Muthana was born to parents from Yemen who became naturalized American citizens, according to the Counter Extremism Project at George Washington University.

Most people born in the United States are accorded so-called birthright citizenship but there are exceptions.

Under the Immigration and Nationality Act, a person born in the U.S. to a foreign diplomatic officer is not subject to U.S. law and is not automatically considered a U.S. citizen at birth.

Pompeo’s statement on Muthana – one of the few Americans among the hundreds of Europeans to have joined the ranks of the Islamic State group in Syria – is at stark odds with his calls on other countries to bring back and prosecute their own jihadist nationals.

In late 2014, shortly after moving to Syria, Muthana posted on Twitter a picture of four women who appeared to torch their Western passports, including an American one.

She went on to write vivid calls over social media to kill Americans, glorifying the extremist group that for a time ruled vast swathes of Syria and Iraq.

But with the Islamic State group down to its last stretch of land, Muthana said she had renounced extremism and wanted to return home.

Muthana, who has been detained by US-allied Kurdish fighters, said that she had been brainwashed online and was ashamed of her past support for the militants. She was married three times and has a toddler son.