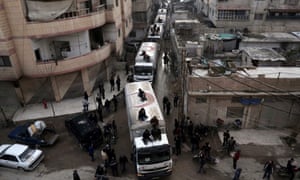 Vital cross-border aid to Syria is under threat after the UN security council was unable to overcome Russian and Chinese objections to the programme.

The aid, which is sent over borders at four UN approved checkpoints and without the formal permission of the Syrian regime, is seen as critical as the humanitarian crisis in Idlib and north-east Syria continues to mount.

Throughout the past fortnight , the UN security council has been considering two alternative resolutions on cross-border aid deliveries to Syria, and following an impasse on Thursday a further attempt to resolve the issue may be made on Friday.

The Russia-proposed resolution suggests extending the mechanism of cross-border aid deliveries to Syria, but through only two checkpoints, at Bab al-Salam and Bab al-Hawa, on the Syria-Turkey border. Renewal of the mandate would last only six months, until 10 July 2020.

Russia wants to end crossings at Ramtha on the Jordanian border and at Yaroubiyeh on the border with Iraq.

Western diplomats say the Yaroubiyh crossing is of crucial importance because it allows 40% of the medicines for humanitarian operations to be transported to the north-east. Some diplomats also believe the closure of Yaroubiyeh, which is on the main highway between Syria and northern Iraq, would undercut autonomy in the north-east of the mainly Kurdish SDF forces and make the US presence in the area harder to maintain.

The area served by Yaroubiyeh includes the high-profile al-Hawl camp, which houses nearly 69,000 people, including imprisoned foreign Islamic State fighters and their families.

Ankara had suggested opening a fifth crossing through Tal Abyad on Syria’s north-eastern border with Turkey.

In an effort to secure Russian support, the draft proposed by Germany, Belgium and Kuwait suggests delivering aid through three as opposed to the current four checkpoints. The Jordanian crossing would be closed under this proposal.

Cross-border aid deliveries do not require permission from Damascus. Moscow argues the mechanism has lost its relevance as the Syrian government is gradually regaining control over the country’s territory. It also believes the checkpoints are used by terrorist groups, a charge the UN strongly denies.

UN diplomats are eager to reach an agreement before Christmas, fearing it will be more difficult to solve the issue close to the deadline of 10 January since in the new year there will be a new UN security council membership.

The decision to introduce cross-border aid deliveries to Syria was first made in July 2014 after the civil war made it impossible for civilians to access humanitarian aid.

The assistant secretary-general of OCHA, the UN humanitarian agency, Ursula Mueller, said the humanitarian position was worse than last year, and reducing in the number of crossings was not justified.

She added: “Without the cross-border operation, we would see an immediate end of aid supporting millions of civilians. That would cause a rapid increase in hunger and disease, resulting in death, suffering and further displacement – including across-borders – for a vulnerable population who have already suffered unspeakable tragedy as a result of almost nine years of conflict.”

The UK ambassador to the UN, Karen Pierce, said: “If the UN does not help these communities, there is no evidence, no evidence at all to believe that the Syrian government either wants to or can or will provide that assistance.”

The International Rescue Committee, alongside a host of other aid agencies, has been urging the security council not to scale back on aid delivery.

In a statement, it said: “In 2014, when this resolution was first adopted, the security council expressed ‘grave alarm’ that the number of people in need of assistance had risen to more than 10 million. At the end of 2019, that number stands at more than 11 million – almost 3 million of whom are only able to receive aid thanks to the cross-border response. The situation inside Syria remains a humanitarian catastrophe. Now is not the time to scale back on humanitarian access.”