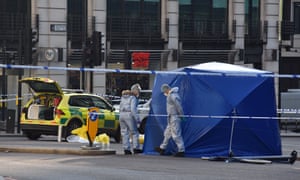 The London Bridge attacker had asked for help to be deradicalised while he was in prison, but none was forthcoming, his solicitor has claimed.

Vajahat Sharif told the Guardian Usman Khan had come to realise that violent extremism was wrong and accepted his understanding of Islam was deficient.

Khan was one of nine members of an al-Qaida-inspired terrorist group convicted in 2012 of plotting to bomb the London Stock Exchange and build a terrorist training camp in Pakistan that was disrupted by MI5 and the police. He was also a supporter of al-Muhijaroun, the extremist group with which scores of terrorists were involved. However, Sharif said Khan became disillusioned with the group after his imprisonment, and that extremists may have targeted him to be “regroomed” after release from jail, with devastating consequences. 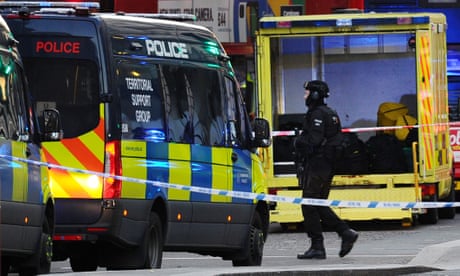 He said Khan first mentioned wanting to be free of Islamist extremism after his conviction in 2012, and then repeatedly throughout his time in jail, last mentioning it in 2018 before his release.

“He requested intervention by a deradicaliser when he was in prison,” Sharif said. “The only option was the probation service and they cannot deal with these offenders. He asked me on the phone to get assistance from a specific deradicaliser.

“He asked [me] once or twice before he was released in 2018. Probation do a good job with conventional offenders but they can’t deal with ideological offenders.”

Khan, 28, killed two people and injured three others before being shot dead by police during a stabbing rampage at London Bridge on Friday afternoon. After his conviction in 2012 he was given an indeterminate jail sentence, with a minimum term of eight years. On appeal in 2013, it was replaced with a 16-year, fixed-term sentence and an extended period on licence.

Sharif said Khan, whom he last spoke to in March, was released to a bail hostel from where he had to report to a police station every day, had interactions with the probation service and had to wear a tag.

“In prison he begin to realise his Islamic thinking was not correct; he accepted that. He criticised the al-Qaida ideology and violent extremism. He did recognise that his Islamic understanding was incomplete. A lot of these characters pick and choose from different sermons, it’s like an echo chamber.”

Sharif said the policy for terrorist prisoners needed to change to boost efforts to turn them away from supporting ideologies that incite violence: “There is a flaw in the policy. You should have substantial ideological evaluation of these individuals before they are released on licence.”

Sharif said Khan appeared to be rehabilitated and was a model prisoner during his time in HMP Whitemoor: “He was having a go at Isis before his release. I’ve no idea what happened after his release, that is what is shocking. Maybe he was not ideologically robust enough to resist the radicalising groomers – I thought he was a reformed character.”

He said that when Khan was arrested in 2010 he supported al-Muhijaroun, but “by the end he was disillusioned with them”.

“His parents are thoroughly decent, hard-working people, first-generation migrants from Pakistan. His family were at a loss when he was arrested and charged.”