U.S. Pullback in Syria Could Aid Assad and ISIS – The New York Times

Analysts said the redeployment would betray America’s Syrian Kurdish allies, decrease American leverage in Syria and open a void that could benefit Iran, Russia and the Islamic State.

BEIRUT, Lebanon — Before dawn on Monday, at a military base in northeastern Syria, an American general delivered the bad news to his Syrian counterpart.

The United States was going to allow Turkish forces to move into the area, leaving the Kurdish-led Syrian militia vulnerable.

“You are leaving us alone,” the Syrian commander, Mazlum Kobani, responded angrily, and accused the United States of complicity in a looming Turkish attack, according to a United States official and another person with knowledge of the meeting.

President Trump’s surprise announcement that the United States would allow Turkey to take over a swath of northeastern Syria, at the expense of the militia that fought alongside the United States against the Islamic State, could alter the course of the country’s eight-year civil war.

In addition to betraying the militia, the Kurdish-led Syrian Democratic Forces, analysts said, the move could empower Turkey, extending its control over another part of northern Syria. It could also create a void in the region that could benefit President Bashar al-Assad of Syria, Russia, Iran and the Islamic State, also known as ISIS.

And it would likely further limit the United States’ influence over the conflict.

“The United States just threw away the last leverage it had,” said Dareen Khalifa, senior Syria analyst with the International Crisis Group. Even if the United States kept its roughly 1,000 troops in Syria, Mr. Trump’s announcement late Sunday night made it clear to the war’s other combatants that he wants out.

“They are just waiting for the tweet,” she said.

After the jihadists of the Islamic State seized control of nearly a third of northeastern Syria, the United States partnered with a Syrian Kurdish militia in 2015 to fight them. Other groups also joined to form the Syrian Democratic Forces, or S.D.F., which claimed control over the land it liberated from ISIS.

Since then, a small contingent of American troops, now numbering about 1,000, have backed the S.D.F. in holding the area.

After the decline of ISIS, the Trump administration came to see the S.D.F. as the best means to check the influence of Iran and Russia, prevent a jihadist resurgence, and maintain a stake in eventual peace talks.

But if the S.D.F.’s hold on northeastern Syria weakens, it could make it easier for Mr. Assad and his Russian and Iranian backers to reclaim the territory. An open conflict with Turkey could siphon Kurdish fighters to the front lines, allowing ISIS remnants to reassert themselves elsewhere.

Turkey has always objected to the S.D.F. presence on its border. President Recep Tayyip Erdogan saw the Kurdish fighters who form the group’s backbone as an extension of the P.K.K., the Kurdish guerrilla movement that has fought a bloody, decades-long insurgency against the Turkish state.

He worried that greater Kurdish autonomy in Syria was a security threat and demanded a corridor, a so-called safe zone, up to 20 miles deep and hundreds of miles long, to keep Kurdish forces at bay.

Subscribe for original insights, commentary and discussions on the major news stories of the week, from columnists Max Fisher and Amanda Taub.

For months, American diplomats had been working to ward off Turkish threats to send troops across the border, most recently carrying out joint security measures in a small safe zone with the United States.

But Mr. Erdogan was not satisfied, and he spoke by phone with President Trump on Sunday. Shortly afterward, the White House announced that the Turkish military would enter Syria and that the United States “will not support or be involved in the operation.”

Mr. Trump argued Monday that the United States’ partnership with the Kurds had essentially served its purpose, writing on Twitter that the Kurds had fought well “but were paid massive amounts of money and equipment to do so.”

He dismissed their conflict with Turkey as of no concern to the United States. “It is time for us to get out of these ridiculous Endless Wars, many of them tribal, and bring our soldiers home,” Mr. Trump wrote.

The decision surprised many of the military and State Department officials who carry out Syria policy, and was met with opposition by Mr. Trump’s Republican allies in Washington. Mr. Trump later tried to mollify his critics, saying that if Turkey “does anything that I, in my great and unmatched wisdom, consider to be off limits, I will totally destroy and obliterate” its economy.

The S.D.F., which has said it lost more than 10,000 fighters battling the Islamic State alongside the United States, was bitter. Mr. Trump’s decision, Mustafa Bali, an S.D.F. spokesman, wrote on Twitter, “is about to ruin the trust and cooperation between the S.D.F. and U.S. built during the fight against ISIS.”

He and other Kurds also shared a video on Twitter of Mr. Trump lauding the Kurds as military partners during a news conference at the United Nations last year.

“We do get along great with the Kurds. We are trying to help them a lot,” Mr. Trump said in the video, adding that many of them had “died for us.”

“I can tell you that I don’t forget, these are great people,” he said.

Trump: “Kurds are great people, great fighters, I like them a lot. We are trying to help them a lot. Don’t forget that’s their territory.They fought with us, they died with us, we lost tens of thousands of Kurds fighting ISIS. They’re great people and we have not forgotten.” 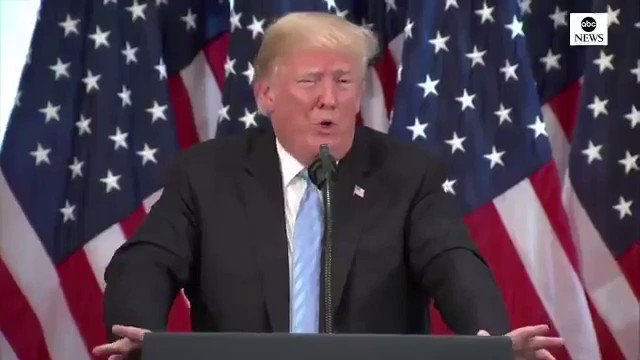 621 people are talking about this

On Monday, American forces pulled back from two observation posts in Syria, near the towns of Tel Abyad and Ras al Ain near the Turkish border.

Turkish media and military analysts have widely reported that Turkey will soon enter the area between the towns. Although Mr. Erdogan wants a buffer zone running the entire length of the Turkish-Syrian border, he said this summer that he would accept a smaller area to start with and proceed step by step.

A different group of Syrian fighters, known as the Free Syrian Army, are preparing to deploy with Turkish troops. They have said the plan was to enter the two border towns, but that the Turkish-backed forces would not enter towns where Americans are based.

But the Turkish incursion raises questions about the future of the entire area under S.D.F. control, which extends for hundreds of miles along the Turkish border and deep into Syrian territory on the eastern side of the Euphrates River. It includes major cities such as Raqqa, once Islamic State’s de facto capital, some of Syria’s richest agricultural land and a number of oil fields.

The S.D.F. warned in a statement on Monday that a Turkish military incursion could force it to divert its forces from areas where ISIS remains a threat in the south to defend itself against the Turks in the north. Abandoning anti-ISIS operations would “destroy all that has been achieved in terms of stability over the last years,” the statement said.

A Kurdish redeployment would put other American objectives at risk, too.

“Bottom line: Trump tonight after one call with a foreign leader provided a gift to Russia, Iran, and ISIS,” Brett McGurk, a former presidential envoy who pushed for the partnership with the S.D.F. wrote on Twitter on Sunday.

An immediate concern are the Kurdish-run prisons in the area holding captured ISIS fighters and at least two large camps for their families. One of the camps, Al Hol, houses tens of thousands of people including extremists whom the S.D.F. and aid organizations have accused of seeking to re-establish ISIS rule.

The White House statement said that Turkey would assume responsibility for “all the ISIS fighters in the area captured over the past two years,” but two United States officials said there had been no discussion with Turkey or the Kurds about a possible handover. The camps and prisons are far from the area Turkey is expected to occupy.

Not long ago, the Kurds were seen as among the biggest winners in Syria’s war, having gone from being a sidelined minority to the strongest component in a military force that controlled more than a quarter of Syria’s territory, thanks to their fierce fighting and their partnership with the United States.

As their military victories against ISIS mounted, they established local councils to govern and instituted Kurdish education in their communities’ schools.

Those projects are now at risk.

A decline in American support could leave them vulnerable to attacks by ISIS or by others who resent their rise. They have few other international allies, which analysts suspect could push them to seek an accommodation with Mr. al-Assad’s government in Damascus.

But even that may not protect them from Turkey, which has sent its forces into other parts of Syria further west, displacing Kurds and establishing zones where it has provided services and resettled refugees. It says it will do the same in areas now controlled by the S.D.F.

It remains unclear how the S.D.F. would respond to a Turkish incursion, but on Monday it called on the inhabitants of northeastern Syria to “stand with our legitimate forces to defend our homeland from the Turkish aggression.”

While the S.D.F. and United States officials have sought to play down the group’s ties to the P.K.K., many of its leaders and fighters have roots in the movement and could deploy its guerrilla tactics against Turkey if it entered Syria.

“So far they have been incredibly reasonable and have shown restraint,” said Ms. Khalifa, the Syria analyst. “But I don’t know how long that is going to last.”