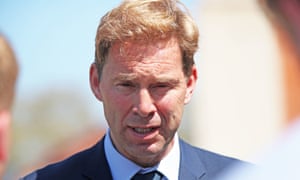 The defence minister, Tobias Ellwood, has rejected the charge that a British-flagged tanker seized by Iran in the Gulf could have been better protected, and said the priority for the UK must be to de-escalate tensions.

Ellwood also called for more spending on the Royal Navy, and said the US’s decision to withdraw from the Iran nuclear deal had played a part in the increasing tensions in the region.

Among critics of UK government actions ahead of the seizure of the Stena Impero in what the British says were international waters has been Admiral Lord West, the former first sea lord. 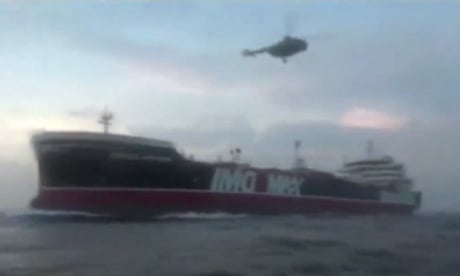 Writing in the Observer, West said ministers should have done more, suggesting those responsible for such decisions were distracted by the race to succeed Theresa May.

But asked on Sky’s Sophy Ridge on Sunday programme whether the UK had taken its “eye off the ball”, Ellwood replied: “No, not at all.”

While the UK was sending another destroyer and a support ship to the region, he said, British vessels were going through 100 nautical miles of waterway every day. “It is impossible simply to escort each individual vessel,” he said.

Ellwood added that the situation had also changed quickly. “Let’s place it into context – this has been a sudden spike in activity, in threat, that’s ratcheted up in the last few weeks. And it takes time to respond there.”

Asked what the response should be, he said: “Firstly we need to try and de-escalate this. We’ve seen a ratcheting up of tensions in the Middle East.”

The situation with the tanker was, he argued, “part of a wider geo-political challenge that Iran is facing with the west”.

Ellwood said: “So our first and most important responsibility is to make sure we get a solution to the issue to do with the current ship, make sure that other British-flagged ships are safe to operate in these waters, and then look at the wider picture of having a working, proper, professional relationship with Iran.

“But this is a hostile act, let’s not dodge away from that. This is a serious matter which Iran must recognise.”

Asked if sanctions were possible, Ellwood said the government’s Cobra emergencies committee met on Saturday, “so we’re looking at the operational responsibilities from that but, yes, we are going to be looking at a series of options”.

He called for more money to be invested in defence. “If we want to continue playing a role on the international stage – bearing in mind that threats are changing, all happening just beneath the threshold of all-out war – then we must invest more in our defence, including our Royal Navy.

“Our Royal Navy is too small to manage our interests across the globe, if that’s our future intentions, and that’s something the next prime minister will need to recognise.”

Asked if the US’s withdrawal from the nuclear deal played a role, Ellwood said: “There is a concern that we have a difference of opinion with the United States on the nuclear itself. France, Germany and ourselves believe that it has paid dividends, has actually prevented nuclear weapons being developed in Iran.

“We can’t deny that this tactical threat, and escalation of issues in the Strait of Hormuz, factors into this bigger picture.”

Speaking later on the Sophy Ridge show, Labour’s shadow justice secretary, Richard Burgon, said it was important to avoid the UK being sucked into a wider US-led conflict, and to prevent a repeat of the “great tragedy of Iraq”.