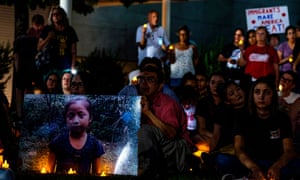 Raids expected to target 2,000 migrants in nearly a dozen citiesVigils held from Los Angeles to Berlin

Immigration raids conducted by the Trump administration are expected in major US cities on Sunday, a prospect that has sparked vigils, protests, condemnation and fear. 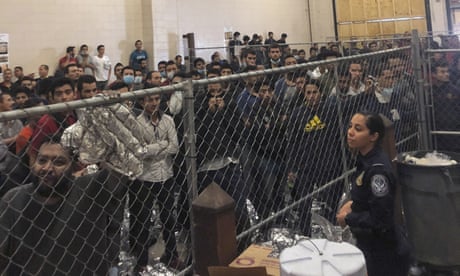 The raids are expected to target roughly 2,000 migrants in the US illegally but the prospect has rippled terror through broad swaths of migrant communities. Vigils were held from Los Angeles to as far afield as Berlin on Friday, as a broad coalition of progressive groups condemned the raids.

“The continued mistreatment of children held in detention facilities, the attacks on our asylum system, and the assaults on immigrant communities through threatened raids show that this administration’s priority is terrorizing communities and not solving our nation’s immigration problems.”

Undocumented migrants described to the Guardian plans to buy groceries, in anticipation of locking themselves indoors. Businesses which rely on migrant labor reported employees staying home from work.

The planned law enforcement actions come on the heels of congressional testimony about “horrifying” conditions inside migrant detention facilities at the southern border, which have been described as overcrowded, filthy and under-resourced.

Twenty-four immigrants have died in Immigration and Customs Enforcement (Ice) custody during the Trump administration.

As recently as Friday evening, reporters with Vice-President Mike Pencevisited a border station in McAllen, Texas, and described overcrowded conditions in which men were held in cages in “sweltering” heat where the “stench was horrendous”.

Because Ice detention facilities are operating with limited capacity, immigration officials had publicly floated the idea of using hotels to hold those seized following the raids.

That prompted one chain, Marriott, to say it would not allow its buildings to be used as detention centers for the federal government. Ice officials responded that they would be forced to separate families if they lack capacity.

Early on Saturday, in Tacoma near Seattle, police said a man armed with a rifle was shot dead after he threw incendiary devices at a migrant detention center run privately for the federal Department of Homeland Security.

The shooting took place about six hours after a peaceful rally in front of the detention center on Friday night, a police spokesman said. A rally planned for Saturday was moved.

In Chicago on Saturday, around 5,000 protesters marched against Trump’s immigration policies, belting chants critical of the president and Ice. Police said the protest was peaceful and there were no arrests. Chicago is a target city.

Demonstrations were held in other cities including Phoenix, which is not expected to be among the cities raided. On Friday night, dozens of protesters blocked a downtown street and disrupted light rail traffic. Police arrested 16. 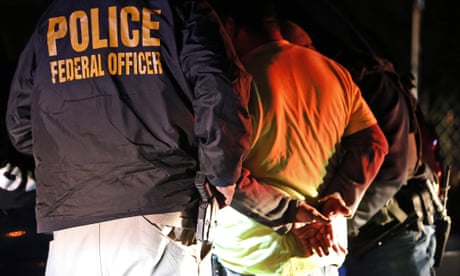 ‘Every day, it is a risk’: immigrant communities paralyzed by fear of impending Ice raids

Trump first said his administration would conduct nationwide raids in June, only to postpone the operation. Now they are scheduled to go ahead with weeks of prior notice.

Condemnation has come from a broad slate of progressive organizations, including groups typically focused on issues outside the immigration debate.

Lights for Liberty vigils protesting against the raids were attended by the American Teachers Federation and sponsored by the Women’s March. Youth climate activists with the Sunrise Movement Boston attended a vigil protesting against “inhumane conditions” in detention centers they called “concentration camps”.

Bridgette Gomez, director of strategic partnerships at Planned Parenthood, the largest network of not-for-profit reproductive health clinics in the US, said: “These raids are a cruel, racist and dangerous extension of the Trump-Pence administration’s already horrifying policies.

“As a healthcare provider, we at Planned Parenthood condemn immigration raids that have a dangerous chilling effect on immigrants seeking care that they need and deserve.”

Sorgente: Impending immigration raids across US spark anxiety and protests | US news | The Guardian