Brexit: key strands of British policing ‘in jeopardy’ because of no-deal risk | UK news | The Guardian 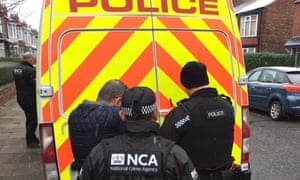 Britain’s National Crime Agency (NCA) is harvesting information from EU databases, including 54,000 files covering criminals, terrorists and missing persons, in an attempt to mitigate the heightened risks of a no-deal Brexit, according to a leaked document.

The report, seen by the Guardian, suggests EU alerts have been transferred to the Police National Computer (PNC) to give UK forces access after 31 October but that key strands of British policing remain “in jeopardy” because of the growing danger of a no-deal exit since Theresa May’s resigned as prime minister.

On Friday, her successor, Boris Johnson, announced plans to recruit 20,000 police officers “to tackle the scourge of crime”. Johnson has made strengthening attempts to fight criminality a plank of his administration.

But the report, commissioned by the International Crime Coordination Centre (ICCC), a Brexit-focused unit of the National Police Chiefs’ Council, warns that the “internationalisation” of criminality is making it increasingly difficult for law enforcement agencies to be effective on their own.

“Undoubtedly, uncertainty about the UK’s future relationship with the EU has increased, due to the resignation of the PM and the ensuing leadership contest,” the report by the former NCA deputy director general David Armond says.

“All Brexit scenarios are now back on the table, including exiting the EU with or without a deal, a further extension to the process and a second referendum. A no-deal Brexit at the end of October is now a possibility, which means that the priority for ICCC, the [International Crime Bureau] and police forces should be to focus on the mitigation of increased risks due to the loss of access to SIS II alerts.” SIS II is the Schengen Information System database.

Once the UK leaves the EU, police forces will not have access to European arrest warrants, European investigation orders or the Schengen Information System II, which allows officers to enter and consult alerts on persons or objects.

The report notes that the NCA “ably assisted by [the Criminal Records Office], has transferred the details of 54,000 alerts from the EU on to the PNC and the Warnings Index”.

A spokesman for the NCA declined to comment on the “leaked document” but denied that alerts on the SIS II database had been transferred directly into UK systems as part of Brexit preparations, a potentially illegal act.

EU member states are instead being encouraged to share SIS II alerts with Interpol from where the information could still be legally accessed by the UK once the country is out of the bloc, it was said.

The report further suggests that UK forces have “cut and pasted” copies of SIS II alerts in order to send them to Interpol. The NCA declined to comment.

The EU has long been privately concerned about the handling of their SIS II database by UK law enforcement agencies. This week, the European security commissioner, Sir Julian King, refused to confirm the existence of a classified EU report which is said to have made allegations of illegal copying. “Those are meant to be confidential discussions that we have with the individual member states,” King said.

The Home Office has made available £5.6m to a Brexit contingency unit because of the dangers involved in a cliff-edge loss of access to EU security and criminal databases. Ormand’s report warns that “a key feature of crime, particularly serious organised crime, is that the perpetrators, the victims and the commodity are in different jurisdictions across the globe.

“Money movements are increasingly difficult to track and funds perpetrated through fraud via internet scams can be moved through multiple accounts and beyond the reach of law enforcement in seconds with a few keyboard clicks.

“Increasingly, traditional means of investigation are being thwarted by technology (eg telephone interception and conventional surveillance). Organised criminals exploit our borders and judicial differences and increasingly relocate from jurisdictions where law enforcement capabilities are strong to reduce the chance of detection.

“An increasing percentage of crime is cross-border and cross-jurisdictional and ever more complex to investigate and detect.

“Increased migration into the UK, allied to cheaper international travel has naturally led to an increase in foreign national offenders being detected … This all leads to the obvious conclusion that the maintenance of comprehensive and effective police cooperation across the globe is essential if we are to respond to current and future threats.”

An NCA spokesman said: “As part of the NCA’s Brexit planning, we have placed all EU Interpol notices and diffusions [sent to the UK] on to PNC and border systems.

“This activity strengthens the UK border and inland in the event of the loss of SIS. There has been no transfer of EU SIS data into UK systems as part of the NCA’s activities to prepare for EU exit.

“The UK has the right to use the data in this way and this has been completed with the assistance of Interpol secretariat general in Lyon.

“In addition, the NCA have been tasked with circulating UK police data on the Interpol system. This data covers travelling sex offenders, missing persons and persons who are wanted for judicial or police purposes. This data will still be available to all EU member states in the event of the loss of UK data on SIS.”