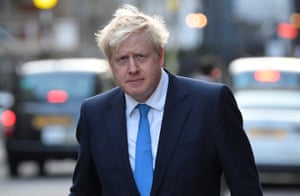 Rolling coverage of the day’s political developments as they happen, including Theresa May’s formal resignation as remainers refuse to serve under new PM

An ambition fulfilled – but what next for Britain

What the papers say about Boris Johnson

It looks as if David Gauke, the outgoing justice secretary, has been using that ageing app that is all the rage at the moment.

Unlike many news organisations, we chose an approach that means all our reporting is free and available for everyone. We need your support to keep delivering quality journalism, to maintain our openness and to protect our precious independence. Every reader contribution, big or small, is so valuable.

For as little as €1 you can support us – and it only takes a minute. Thank you. Make a contribution – The Guardian

The Daily Mirror has hired a bus to let us know what it feels about the Boris Johnson premiership.

This is from Sarah Wollaston, the former Conservative MP who now sits as an independent.

Wollaston is referring to how Dominic Cummings was found to be in contempt of parliament because he refused to give evidence to the culture committee inquiry into fake news.

From the Spectator’s James Forsyth

Boris Johnson is said to operate a “court” where a wide circle of advisers compete for his attention, not all of them saying the same thing (unlike, say, Theresa May, who relied very heavily on just two close aides when she became PM). Johnson also does not like disappointing people. That might be why he would be attracted to the idea of not have to choose just one person to be chief of staff.

More on Dominic Cummings. This is what my colleague Patrick Wintour wrote in 2013, summarising a 250-page essay Cummings had written on how to reform education.

Education in England is no better than mediocre, and billions of pounds have been wasted on pointless university courses and Sure Start schemes for young children, Michael Gove’s special adviser has said in an outspoken private thesis written a few weeks before he is due to step down from his post.

Dominic Cummings, the most influential adviser to the education secretary in the past five years, also argues in a revealing 250-page paper that “real talent” is rare among the nation’s teachers – and, eye-catchingly, says educationists need to better understand the impact of genetics on children. The adviser, known for making fierce demands of civil servants, writes that the endgame for the Department for Education should be to reduce its role to acting as accountants and inspectors, employing hundreds and not thousands of civil servants – and creating an environment in which private and state education would be indistinguishable.

The Cummings manifesto claims that “the education of the majority even in rich countries is between awful and mediocre”, and that the quality of maths education, in particular, is poor.

“In England, few are well trained in the basics of extended writing or mathematical and scientific modelling and problem-solving,” he writes.

According to the BBC’s Laura Kuenssberg, Boris Johnson is going to appoint Dominic Cummings as a senior adviser.

This would be a remarkable appointment – depending on how much power Cummings ends up having, perhaps one of the two or three most important of the day. Cummings is an ultra-bright, scruffy iconoclast who worked as a special adviser for Michael Gove before becoming campaign director for Vote Leave. He is credited by some with being the mastermind behind that campaign, which is why the playwright James Graham gave him the central role (played by Benedict Cumberbatch) in his TV drama about Brexit.

The key point about Cummings is that is he not really a conservative; he is a Tory Leninist who believes British government, and especially the civil service (of which he has been very critical) needs fundamental reform. Officials in Number 10 will be horrified at the prospect of his heading their way. Some of Johnson’s allies in the European Research Group, which represents hardline Brexiter Tories, will also be concerned. Cummings has been caustic about them in the past. For example, this is what he said in a blog earlier this year.

Those of you in the narcissist-delusional subset of the ERG who have spent the last three years scrambling for the 8.10 Today slot while spouting gibberish about trade and the law across SW1 – i.e exactly the contemptible behaviour that led to your enforced marginalisation during the referendum and your attempt to destroy Vote Leave – you are also in the pirate category. You were useful idiots for remain during the campaign and with every piece of bullshit from Bill Cash et al you have helped only Remain for three years. Remember how you WELCOMED the backstop as a ‘triumph’ in December 2017 when it was obvious to everybody who knew what was going on – NOT the cabinet obviously – that this effectively ended the ‘negotiations’? Remember how Bernard Jenkin wrote on ConHome that he didn’t have to ‘ruin his weekend’ reading the document to know it was another success for the natural party of government — bringing to mind very clearly how during the referendum so many of you guys were too busy shooting or skiing or chasing girls to do any actual work. You should be treated like a metastasising tumour and excised from the UK body politic.

On the Today programme Barry Gardiner, the shadow international trade secretary, confirmed that Labour is talking to Tory MPs opposed to a no-deal Brexit about whether they would support the opposition in a vote of no confidence in Boris Johnson. When asked about these talks, Gardiner said: “Of course those discussions are going on.”

Here is the scene in Downing Street this morning.

Boris Johnson’s unpopularity in Scotland explains why Ian Blackford, the SNP’s leader at Westminster, told the Today programme this morning that Boris Johnson could be the last prime minister of the United Kingdom.

This is from ITV’s Joe Pike. The fact that the Scottish edition of the Sun can’t bring itself to print a positive splash about Boris Johnsonbecoming prime minister tells you a lot about how he is seen as an electoral liability for his party in Scotland.

From the Press Association’s Ian Jones