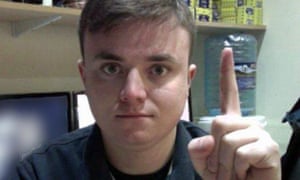 A plot to kill a Labour MP and a police officer was only disrupted after an informant within the neo-Nazi group National Action blew the whistle. Robbie Mullen passed the details on to Hope Not Hate’s Matthew Collins. Here, they tell their extraordinary story. Also today: the columnist Aditya Chakrabortty on his unlikely collaboration with the techno group Underworld

In the summer of 2017, Jack Renshaw, then aged 22, of the neo-Nazi group National Action, sat in a pub in Warrington and told his comrades about his plan to kill the Labour MP Rosie Cooper and DC Victoria Henderson, a police officer who had been investigating him. Around the table was Robbie Mullen, who had become disillusioned and passed on details of the plot to Matthew Collins of the anti-racism charity Hope Not Hate.

The two men tell Anushka Asthana their extraordinary story of covert meetings and intelligence gathering from within one of Britain’s most dangerous neo-Nazi groups. Last week, Renshaw was sentenced to life in prison after admitting the plot.

Also today: the Guardian columnist Aditya Chakrabortty on his unlikely collaboration with the techno group Underworld.

Sorgente: Inside the neo-Nazi plot to kill a Labour MP – podcast | World news | The Guardian