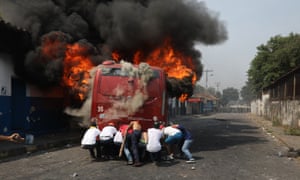 At least four people have been killed and hundreds injured in a wave of violence that convulsed Venezuela’s border regions on Saturday, as opposition activists tried to defy a government ban and bring food and medical supplies into the country.

After the failed attempt to breach government blockades, opposition leader Juan Guaidó declared the fight would continue, and said “we must keep all our options open for the liberation of our homeland”.

He will head to Bogotá for a meeting on Monday with US vice-president Mike Pence, and other regional leaders in the Lima Group.

Florida senator Marco Rubio responded to Guaidó’s comments, saying he had spoken to regional leaders and the actions of President Nicolás Maduro’s regime on Saturday had “opened the door to various potential multilateral actions not on the table just 24 hours ago”.

Although Guaidó did not secure the mass defections he had hoped for, at least 60 border guards deserted their posts and fled into Colombia, as other members of security forces loyal to Maduro used tear gas and rubber bullets to force back protesters and halt civilian convoys escorting aid supplies. 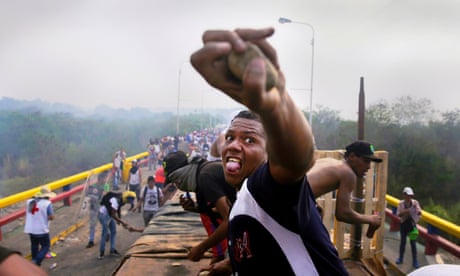 In pictures: violent clashes on the Venezuelan border

Three trucks of aid were set on fire by tear gas grenades as they approached the first border checkpoint at the Santander bridge connecting Venezuela to Colombia. There were injuries on both sides of the crossing, with Colombian authorities reporting at least 285 wounded.

In the south, opposition activists claimed aid had reached Venezuela, but although two trucks did leave Brazil they stopped just a few metres inside the border, a national guard checkpoint between them and any possible recipients.

Beyond the security forces was the town of Santa Elena de Uairén, which saw the worst of the violence, with both pro-government armed gangs and national guard members taking to the streets to try and disperse opposition supporters.

At least four people were killed and 18 injured by gunfire, according to campaign group Foro Penal, and the town’s hospital was overwhelmed by the influx of dead and injured.

The first casualty of the aid delivery attempt had come in the same area on Friday, when a military convoy opened fire on indigenous protesters.

Humanitarian aid is much-needed in a country racked by hunger, hyperinflation and food shortages. But opposition leaders also hope their attempt to deliver supplies will undermine Maduro and encourage defections from security forces that have largely remained loyal to Caracas.

As violence raged along the borders, Maduro addressed a rally in the capital, insisting he was “stronger than ever” and calling volunteers trying to ship aid “traitors”. 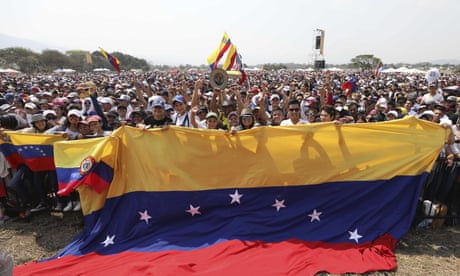 He denounced the food and medical supplies as an American pretext to destabilise his government, and told the crowd he had broken off diplomatic relations with Colombia because the country was being used for “attacks against Venezuela”.

After his speech, as tear gas billowed at the country’s borders, he danced with his wife onstage in a bizarre display of nonchalance.

Guaidó, who had declared himself interim president in late January, had claimed a premature victory at about noon local time, announcing that the first aid had already crossed the border from Brazil.

But they went only a few metres inside Venezuela, and by evening the two small trucks loaded with donations had driven back into Brazil, citing security concerns..

By the end of Saturday, which the opposition had made a deadline for aid shipments to cross the border, it appeared the two sides had settled into an uneasy standoff.

Colombia announced late on Saturday that it would close all the border crossings for two days, to check for damage after attempts to take aid across were met with fierce violence. At one point tear gas fired by Venezuelan forces set an aid truck alight.

The most serious clashes were on the Santander bridge separating Cúcuta and the Venezuelan town of Ureña. There volunteers escorted aid trucks up to a security cordon but were pushed back by rubber bullets and tear gas, and gangs loyal to Maduro threw stones at opposition supporters from atop a truck.

“I was crossing the bridge when a rubber bullet hit me,” said Carlos Juancho, a student from Merida, wounded in the neck. “This is how Maduro treats his people.”

The opposition perhaps thought civilian convoys would test how far ordinary soldiers were willing to go to protect the government. Whatever their orders, many were expected to be uneasy about opening fire on unarmed fellow Venezuelans.

There were at least 60 members of security forces in the area who crossed the border they were ordered to defend, Colombian immigration officials said. Guaidó took to Twitter to encourage others to join them.

“In my position as commander in chief of the armed forces, I declare that soldiers who cross the border will not be considered traitors to their homeland,” Guaidó said in a tweet.

But there were not enough defections to allow aid to pass the border crossings. Although Guaidó has won a wave of popular support and been recognised as Venezuela’s leader by the US and many of its allies, he has so far struggled to persuade the country’s military to back his cause en masse.

Promotions and lucrative commercial opportunities have helped keep senior officers loyal, while many in the lower ranks are terrified of being punished for defection.

One of the defectors who crossed on Saturday said it had taken courage to leave. “Brother, I have been thinking about this for days,” he said, in a video shared on social media. “It wasn’t something I decided overnight.”

Many others in the security forces agreed with him but were too afraid to defect, he said. “You can’t say anything against the government.”

Friday’s attack near the Brazil border suggested the military were under heavy pressure from senior officers. Local officials said the attack was the first time in living memory the armed forces had opened fire on indigenous people in the Gran Sabana area, a tourism hotspot famous for spectacular scenery. 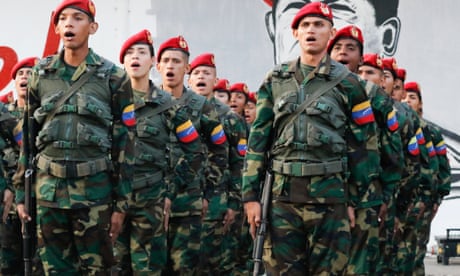 ‘They will torture you’: ex-Venezuelan soldiers on the risk of defecting

The violence began again early on Saturday on the other side of the country, police firing teargas at Venezuelans trying to cross into Colombia in Ureña. Most were not protesters but simply heading across for work or personal reasons.

“We are frightened that what happened yesterday at the other border is going to happen here, with people killed and injured,” said Aurora Albarracin, 55.

Later in the day, protests in towns on the Venezuelan side of the border also turned violent, with protestors throwing stones and bottles, burning military uniforms and setting a government bus on fire, and riot police responding with tear gas. Armed pro-government gangs also opened fire on civilians in the town of San Antonio, wounding at least eleven people.

Rallies around the country aimed to persuade soldiers that they could switch sides. In Caracas, marchers headed for the Carlota military airport in the heart of the city.

“I would tell the soldiers today: put reason and feeling ahead of your weapons,” said Daniel Bruce, an intensive care doctor who said his hospital didn’t have basic medical supplies. “You are also Venezuelans and you suffer the same as us when you go to the hospitals,” he said.

“I’m marching because I believe in the rebirth of my homeland, and I believe that my patients have a right to humanitarian aid. Today is not about ideology, it is about human lives and dignity.”