Donald Trump has directly appealed to the Venezuelan military to support opposition leader Juan Guaidó, and issued his starkest warning yet if it continues to stand with President Nicolás Maduro’s government.

“You will find no safe harbour, no easy exit and no way out. You will lose everything,” the US president said in a speech in at Florida International University in Miami before large American and Venezuelan flags. “We seek a peaceful transition of power, but all options are open.”

In remarks broadcast on state television, Maduro accused Trump of speaking in an “almost Nazi style” and thinking he could deliver orders to Venezuela’s military. “Who is the commander of the armed forces, Donald Trump from Miami?” Maduro said. “They think they are the owners of the country.”

The Venezuelan military could play a decisive role in the stalemate but has largely remained loyal to Maduro so far.

Critics of Maduro say his re-election last year was fraudulent, making his second term illegal. The US and other countries recognise Guaidó as the country’s rightful leader. Throughout his presidency, Trump has reportedly asked advisers if US military intervention is possible.

Greeted by repeated chants of “USA! USA!”, Trump saluted the “determination of millions of everyday Venezuelans, the patriotism of the national assembly and the incredible courage of interim president Juan Guaidó. The people of Venezuela are standing for freedom and democracy and America is right by their side.”

Trump praised Venezuelan dissidents, kissing and bringing to the lectern for brief remarks in Spanish the mother of Oscar Pérez, a rebel helicopter pilot who was killed near Caracas last year after dropping grenades on government buildings.

South Florida is home to more than 100,000 Venezuelans and Venezuelan Americans, the largest concentration in the country.

Venezuela’s power struggle is heading towards a potentially violent showdown on Saturday, when Guaidó will try to run caravans of US humanitarian aid across the Venezuelan border from Colombia. Maduro denies a humanitarian crisis exists, blaming the Trump administration for mounting a coup against him.

“We must work together to end a humanitarian disaster,” Trump said in Miami. “Unfortunately, Dictator Maduro has blocked this lifesaving aid from entering the country,” he said, claiming the leader was happy to see his people starve.

Among a number of mentions of Cuba, the socialist country with which the Obama administration moved to normalise relations, Trump claimed the Venezuelan armed forces were “risking their future, their lives and Venezuela’s future for [Maduro], a man controlled by the Cuban military and protected by a private army of Cuban soldiers”.

“Maduro is not a Venezuelan patriot,” Trump said. “He is a Cuban puppet, that’s what he is.”

“The eyes of the entire world,” he said, were on the Maduro regime “today, and every day in the future. You cannot hide from the choice that no confronts you.” 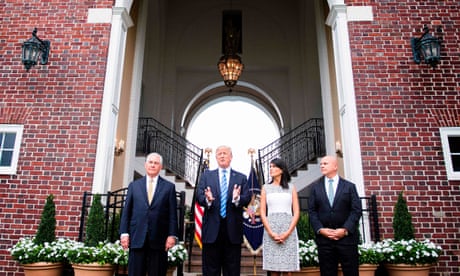 More than 2 million Venezuelans have fled the country in the past two years, most heading across the border into Colombia, Brazil and Peru. Those left behind struggle to afford the scarce supplies of food and medicine as inflation soars.

Maduro maintains support from Russia, China and Turkey, while Guaidó has won recognition from dozens of world leaders in Latin America and Europe, who are demanding that Maduro holds new elections or steps down.

In his condemnation of “the horrors of socialism and communism”, which he said had produced “a nightmare of poverty, hunger and death”, Trump was also looking to draw a contrast with the policies of progressive Democrats, which he calls socialist, as he gears up for the 2020 election. 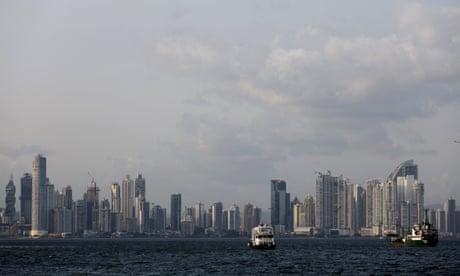 “Years of socialist rule have brought this once thriving nation to the brink of ruin,” he said, saying the Venezuelan government had suppressed the press, ruined the economy and destroyed the rule of law.

“The results have been catastrophic,” he said, adding: “The twilight of socialism has arrived in our hemisphere and frankly in many other places in the world.” He said socialism was doomed in Nicaragua and Cuba as well.

Trump has been spending the holiday weekend at his private club in West Palm Beach, Florida, playing golf each day on his own course.

Mass. Prisoners Could Choose Between Freedom And Their Organs