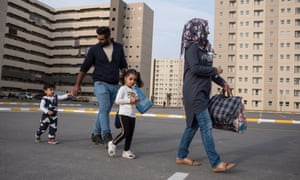 The next 15 megacities #1: Iraq’s capital remains a profoundly damaged place, but the city feels more stable these days – at times even vibrant

by Peter Beaumont in Baghdad. All photographs by Sean Smith

After an exhausting journey through Baghdad’s vast and grimy suburbs, the pastel-coloured blocks of Besmaya Dream City rise up above the rushes just beyond one of the modern gates marking the edge of the city.

The orderliness of these dozens of towers – some lived in, some unfinished – is a shock in the otherwise chaotic jumble of low-rise cityscape. The residential complex is being built by a South Korean company, Hanwha, and will house 100,000 people once its delayed construction is complete.

Once through the security checkpoint, you find children at play in the quiet public areas between the blocks. Families sit and chat on plastic chairs outside a newly opened tea stall.

Dream City – aimed at the beleaguered middle class – offers one potential vision of the future as the population of Iraq’s capital nears 10 million and the city prepares to join the ranks of the world’s megacities. Baghdad is in flux.

Violence has dominated here for much of the past 15 years, from the US-led invasion of 2003 and subsequent occupation to the years of sectarian bloodshed. That declined until a new resurgence of violence as Islamic State claimed territory in towns such as Fallujah and Ramadi, just a short drive away.

The dismantling of Isis’s self-proclaimed caliphate has prompted a renewed intake of breath. Bombs occasionally explode and tensions remain, but Baghdad feels more normal these days, vibrant even – despite the omnipresent “martyr pictures” of police, army and militia members who died fighting the group.

The Zawra amusement park, long a focus of Baghdad weekends, is crowded with picnicking families, and wealthier areas such as Jadriya and Karrada are buzzing. On the streets, dandified young men in tailored jackets and drainpipe trousers sport towering pompadour hairstyles.

Ground has been broken for a new Central Bank building designed by the late Zaha Hadid, although as with many new projects, when it will completed is an open question. Residents flock to the towering new Baghdad Mall with its shops and restaurants, marble floors and planters.

But Baghdad remains a profoundly damaged place. And for all its newness, Dream City echoes many of the city’s continuing issues.

In her sixth-floor apartment, Baidaa Mohamed, a mother of two, is enthusiastic about many aspects of her new home, which she bought with a cheap mortgage after moving from the centre of the city. With its own power station, Dream City has more regular electricity than most of Baghdad, which still suffers regular power cuts.

Her new flat is quiet, modern and pleasant, the floor scattered with toys and with room for her son to run around.

“Here, there’s nonstop electricity and piped gas which means I don’t have to worry about heavy cooking gas tanks, and continuous tap water,” she says. “But what’s most important is that the children are safe. I have a kindergarten just across from us and it’s free because it’s public.”

Mohamed remains worried, though, not least by the impending transfer of management of her block from the South Koreans who built it to an Iraqi company.

Frankenstein in Baghdad, the recent novel by Ahmed Saadawi, contains a metaphor for the current state of the city. Like Saadawi’s reanimated monster Whatsitsname – built from the body parts of victims of sectarian bombs – Baghdad has cannibalised itself to keep going.

Larger dwellings have been divided and subdivided by families to deal with the growing housing crisis, largely illegally. Squatter neighbourhoods have taken over old army bases from the Saddam Hussein era, even the old nuclear centre in Diyala. Districts once designed as utopian low-income housing projects have been built over.

The reality is that 15 years of conflict have unstitched Baghdad.

Sitting like a cuckoo on the banks of the Tigris is the international zone, known as the Green Zone when it was occupied by the invading American forces. It is still a secure area separate from the rest of Baghdad.

Throughout the city, concrete security walls surround buildings and whole districts. Put in place by US forces to lessen the sectarian bloodshed, they remain like Whatsitsname’s rough sutures, punctuated by military and police checkpoints.

All of which has accelerated a process long under way, which sees the old Baghdad, with its yellow-brick houses and ornate wooden mashrabiya balconies, fast becoming a distant memory.

Baghdad’s recent population growth has been driven by conflict as well as other more familiar issues, as people have moved from the peripheral cities most affected by the recent violence.

A drive around the city with Abdelwehab Alwehab (pictured above), a professor of urban planning at the university, underlines Baghdad’s problems. In one of the nicer neighbourhoods he stops to show us where eight new dwellings have been illegally squeezed on to the site of a demolished house. Such practices are a persistent and growing problem in the city.

A little further on he points out a street appropriated and gated off by a government minister for his own use. “Unfortunately,” he says, “the last 15 years have really transformed Iraqi cities and Iraqi society, not least in terms of ethics and corruption.

“Whatever the high hopes after the 2003 invasion, they did not materialise. Take transport. The approach to transport infrastructure here is basically nothing but patching up problems.”

As if to illustrate the point, we are sitting in one of Baghdad’s interminable and inevitable traffic jams. The city lacks a mass transit system, and most travel involves long, fitful journeys by private car or minibus taxi.

“Baghdad’s urban integrity was fragmented,” he says. “The city was divided into safe and unsafe neighbourhoods, [separated] physically behind high concrete walls. These neighbourhoods became cities within the city.”

One visible result has been the mushrooming growth of Baghdad’s outsize malls. Inside, people shop and eat safe from the threat of car bombs. In a city where summer temperatures reach the high 40s, the air-conditioning is popular too.

Baghdad was not always like this. In the 1950s, in the pre-revolution era of King Faisal II, and then again during the oil boom of the 1980s, the city vied to regain its historical place as the centre of the Arab world. It attracted leading international architects and planners including Walter Gropius, Frank Lloyd Wright, Gio Ponti and Le Corbusier. Some projects were built, such as Le Corbusier’s sports stadium and Ponti’s Ministry of Planning, but others remained incomplete or never left the drawing board.

A series of impressive masterplans to guide Baghdad’s development were also produced, most of which foundered on the exigencies of Iraq’s decades of crises, from revolution in the 1950s, through the Iran-Iraq conflict and the early 90s Gulf war, to international sanctions on the regime of Saddam Hussein and the renewed violence of the last decade and a half.

They were all largely stillborn – a fate shared by the most recent ambitious masterplan, from Lebanese firm Khatib & Alami.

If state intervention – under both King Faisal and Saddam Hussein – once defined Baghdad’s rapid development, these days, argues Alwehab, it is notable in its absence. Instead, privatised interests encroach on all areas of the urban environment, not least in the city’s chronic housing crisis.

Sign up for the Cityscape: the best of Guardian Cities every week

Alwehab wants to show us one of the last remaining houses from a groundbreaking project from the 1950s, when the architect and urban planner Constantinos Doxiadis was commissioned to reimagine the city. He started construction on a large new low-income housing project along with the Army canal, but only the first phase was completed.

We find the sole surviving little Doxiadis house, with its yellow Baghdad brick. All its neighbours have long since been knocked down, replaced with more modern dwellings. Its owner, Mohammad Kazaal, tells us he plans to demolish the house to replace it with something modern.

These houses were supposed to help Baghdad’s poor – but there are few good options for them these days. The stresses on the city from its growing population is nowhere more evident than in the city’s illegal squatter neighbourhoods.

Jassim Hussein lives on the vast, abandoned Al Rashid military base. The 66-year-old, a former prisoner of war in the Iran-Iraq conflict, has extended part of a tiny concrete barracks building into a simple compound in the shadow of the Dora expressway. He has planted cacti for decoration.

“I’ve been living here for 10 years,” he says. “I live here on my own. I used to work as a guard at a factory not far away that was owned by a Christian family. They gave me somewhere to live for me and my family. Then they sold up and moved to Australia, so I found this place to live.”

Unlike some who have squatted on the old base, Hussein receives a pension for his army service, but it is nowhere near enough to pay rent. Despite Baghdad ranking near the bottom of global scales of liveability, rental and house prices are rocketing.

Hussein’s neighbour Akram Hamid does not even have the benefit of a pension to fall back on. He works as a day labourer for three days a week at most. Although he qualifies for a small amount of social protection, he complains that to register he needs to pay a bribe he cannot afford.

The anxiety around Baghdad’s trajectory is not only confined to those at the bottom of the pile. It can also be found at the new studios of one of the most telling symbols of the city’s latest attempt to reimagine itself – Radio One Iraq.

Set up by 32-year-old IT entrepreneur Ehab Attrachi (pictured above right), the station’s playlist of western music has drawn suspicion from some conservatives, while becoming the soundscape for many of the younger generation.

“We started in 2015 when people were busy with problems in Iraq,” Attrachi says. “The message was that we are going to stay after we get rid of Isis. We wanted to see things get better.

“We wanted to reflect a curiosity in other cultures – to be a bridge after Iraq has been isolated for so long … to make a connection. I think Iraq today is very different to the Iraq of 10 years ago. People are starting to believe in being more open-minded.”

Even so, Attrachi and his assistant Ahmed al-Haddad admit the city remains a tough place to live. “Everything here’s a mess and I don’t think the government is capable of doing anything about it,” says Haddad. “It is impossible to live here.”

And yet at least 6.8 million people and counting are doing just that.