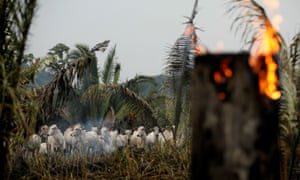 Investigation reveals 70% of Nasa fire alerts were in the estimated buying zones of beef companies, some of which export to UK

Animals farmed is supported by

Fires were three times more common in beef-producing zones than in the rest of the Amazon this summer, according to a new analysis.

The findings once again draw attention to the links between Brazil’s powerful beef industry and the deforestation of the Amazon rainforest, just as the world debates climate change at COP25.

Responding to the work by the Guardian and the Bureau of Investigative Journalism (BIJ), MEPs called on the EU to block beef which may be linked to deforestation. “It is absolutely urgent that the EU puts in place a legal duty on European companies to ensure that their supply chains are free of deforestation,” said Heidi Hautala, a Finnish MEP.

Two years ago Brazilian NGO Imazon collected data to estimate the beef buying zones throughout the Amazon. They identified 128 slaughterhouses, and set about establishing the areas from which these plants could feasibly buy their cattle for processing. Through phone interviews with staff at the abattoirs, or by taking averages based on methods at other meat plants, the research team gathered information on the maximum distances from which each would likely source cattle.

They modelled this data against local factors such as roads, navigable rivers and weather patterns, and estimated the maximum potential buying zone for each slaughterhouse. The buying zones cover large areas of hundreds of km, and there is significant overlap between the buying zones for different companies. Added together, the data creates a compelling picture of the areas of the Amazon where cattle is being raised for beef.

The climate crisis is the most urgent threat of our time. Help us fight it

Using methods designed by the non-profit sustainability project Chain Reaction Research, the Guardian and the BIJ mapped Nasa fire alerts archive data on to the legally defined area of the Amazon and found that of the 554,000 alerts from July to September, nearly 376,000 – around 70% – were in the estimated buying zones, despite the fact that this area covers far less than half of the legal Amazon.

Some of the world’s biggest meat companies operate in the region. More than a quarter of a million fire alerts were issued in the estimated buying zones of JBS, the largest supplier of meat globally, for example. Its factories are known to export to Europe, including to UK companies.

There were almost 80,000 fire alerts in the probable buying areas of Marfrig, the third largest Brazilian beef exporter, and more than 66,000 around abattoirs owned by Minerva. These three meatpackers dominate in Brazil’s Amazon and account for nearly half of the cattle slaughtered in the region, according to Imazon.

JBS, Marfrig and Minerva told the Bureau they were committed to “zero-deforestation” supply chains, and that they all monitor their suppliers to ensure this.

“Theoretical correlation based on estimates is not causation and is misleading,” a JBS spokesperson said. “JBS is actively working to bring together other important stakeholders and companies to join forces to preserve the Amazon.”

The company added: “If farms are deemed non-compliant with our sustainable sourcing policies for any reason, including deforestation, they are blocked from our supply chain … We are not involved in, nor do we condone, the destruction of the Amazon.”

Marfrig also said it blocked any farms found to be involved in deforestation, and that it began monitoring fire outbreaks in August this year. “Whenever any overlapping of areas between the properties and the fire outbreaks is identified, there is an alert for the purchase to be re-evaluated,” it said.

Minerva said there was no evidence it had bought animals from ranches where fires had occurred, and blamed this year’s crisis on the weather. It said “there is no proven connection with agribusiness activities”.

In a separate investigation fires were also found on at least three farms known to sell cattle directly to JBS slaughterhouses. Working with Repórter Brasil, the BIJ found at least one of these plants exports beef and leather globally.

While JBS, Marfrig and Minerva say they are confident that the cattle they buy do not come from illegally deforested areas, they also accept that they cannot know the origin of many because livestock are often moved between the thousands of breeding, raising and fattening ranches.

The beef industry is seen as one of the major causes of deforestation in the wider Amazon region. Cattle ranchers are responsible for 80% of land clearing in every country with Amazon forest cover, according to the Yale School of Forestry and Environmental Studies.

JBS, Minerva and Marfrig all admit they cannot monitor the ranches that feature further down their supply chains. “As of today, none of the players in the industry are able to trace indirect suppliers,” said Minerva.

Marfrig told the Bureau that more than half of the cattle it slaughters originate from these indirect suppliers.

All three companies said they were working with the government or NGOs to address this blindspot in monitoring.

JBS said: “We have been working with local authorities, government and wider industry to gain access to the data and tools required to address this issue.” Marfrig said it requests cattle purchase information from its direct suppliers, while Minerva said that more law enforcement was needed at all stages in the chain.

The Amazon fires this summer caused global alarm. There is no evidence that these fires were started on or by farms supplying JBS, Marfrig or Minerva, but the very existence of a patchwork of ranches in the rainforest could be helping to exacerbate the overall effect of fires started elsewhere. “The whole local climate is drier because you’re getting less evaporation from the trees,” said Yavinder Malhi, professor of ecosystem science at Oxford University.

Experts say the increase in fires was directly caused by an increase in deforestation: the intentional burning of trees that had been felled months before, rather than random wildfires. “Once you clear forest to make a ranch, you have lots of dead materials lying around and then the farmers wait until the dry season to burn off that material,” said Malhi. 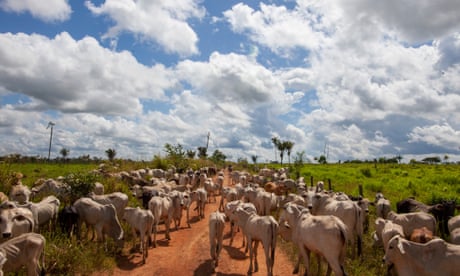 Deforestation has been a key issue at the climate change talks in Madrid, and prominent UK firms wrote to the Brazilian government last week to ask for urgent action.

In response to the new findings MEPs Manon Aubry and Heidi Hautala have both called for action. “It cannot be the responsibility of a consumer to ensure that the products on European markets’ shelves are sustainably produced,” Hautala told the Guardian. “The consumer has to be able to trust that only responsibly produced items are sold in Europe.” Aubry called for a rethink of the EU-Mercosur trade deal which would increase imports into Europe from Brazil and other South American countries.

“The EU also has to question the impact of free trade agreements that are detrimental to both the planet and the people. A deal with the Mercosur would worsen the situation and accelerate deforestation in Amazonia.”

“Our findings illustrate that fires and deforestation continue to take place in JBS’s supply chain, despite the company’s policies and commitments,” said Marco Tulia Garcia, who led the research at Chain Reaction. “It is of the highest urgency that JBS addresses these issues.”

JBS recently took down a website that let customers search product codes for the name and coordinates of the last farm to rear the animal before slaughter, in a move described in the trade press as a reduction of transparency. Customers are now redirected to another site, where only the name and municipality of the ranches are provided.

The company said: “Due to legal concerns based on the Brazilian General Data Protection Regulation, the company limited some of the third party information posted on its website … JBS has a robust transparency policy.”

Mass. Prisoners Could Choose Between Freedom And Their Organs