A prison break and a bombing claimed by the Islamic State punctuated fears that the Turkish invasion, now in its third day, was sowing mayhem.

By Carlotta Gall and Patrick Kingsley

CEYLANPINAR, Turkey — The Turkish invasion of Kurdish-held territory in northern Syria raised new fears of a resurgence of the Islamic State on Friday, as five militants escaped from a Kurdish-run prison and the extremist group claimed responsibility for a bomb that exploded in the regional capital.

As Turkish troops launched a third night of airstrikes and ground incursions, Kurdish fighters said they had thwarted a second attempt to break out of a detention camp for families of Islamic State members.

The moves compounded a mounting sense of turmoil in northeast Syria, where tens of thousands of residents were reported fleeing south. The Turkish government said its troops had advanced five miles inside part of the country. Several major roads had been blocked and a major hospital abandoned.

Since Wednesday, Turkish forces have pummeled Kurdish-held territory with airstrikes and sent in ground troops, trying to seize land controlled by a Kurdish-led militia, the Syrian Democratic Forces. That militia fought alongside United States troops in the recent war against the Islamic State.

The campaign began after President Trump suddenly ordered American troops to withdraw from the area, giving implicit approval to Turkey’s long-anticipated attack on the Kurdish-led militia.

Mr. Trump’s decision was widely criticized, including by his Republican allies in the United States, who said it was a betrayal of an ally — the Kurds — that could cause a re-emergence of the Islamic State.

The White House — concerned that Congress would pursue bipartisan sanctions legislation against Turkey — said Mr. Trump would sign an executive order giving the Treasury Department new powers to punish officials in Turkey if its military targeted ethnic and religious minorities.

“We hope we don’t have to use them,” said Steven Mnuchin, the Treasury secretary. “But we can shut down the Turkish economy if we need to.”

Since pulling out, American officials have expressed growing concern at the direction the Turkish incursion has taken, with officials warning on Friday that the United States would respond forcefully if Islamic State fighters were allowed to escape from prisons in the area.

“The West and the U.S., together they say, ‘You are killing the Kurds’,” said Mr. Erdogan in a speech. “Kurds are our brothers. This struggle of ours is not against Kurds. It is against terror groups.”

The Turkish government has framed the campaign as a counterterrorist operation because the Kurdish-led militia has close ties with a banned Turkey-based guerrilla movement that has waged a decades-long struggle against the Turkish state.

Mr. Erdogan has promised that the fight against the Islamic State will continue, and that his forces and their allies will continue to guard any captured militants in Kurdish-held prisons.

But the operation has already proved highly disruptive to efforts to keep the Islamic State at bay. Although American and Kurdish forces have defeated Islamic State militants in northeastern Syria, the group has sleeper cells in the region that could use the turmoil to retake the land they controlled in the early years of the Syrian civil war.

And the Kurdish militia has diverted soldiers to fight the invasion and abandoned joint operations with American troops as it prioritizes the defense of its land.

On Friday, a car bomb exploded on a residential street in Qamishli, the de facto capital of the Kurdish-held region — a rare act of Islamic State terrorism in a city that was relatively free of trouble before the Turkish assault began.

The Turkish bombardment has also endangered the security of several Kurdish-run prisons for Islamic State militants, with at least three in the vicinity of continuing Turkish airstrikes. It is widely feared that in the chaos, Islamic State fighters will escape captivity, as the five did on Friday.

One of the camps, in Ain Issa, has hundreds of relatives of Islamic State fighters, heightening fears over the effect that the Turkish invasion will have on the fight against the militant group.

Kurdish forces also released video of a third camp, which they said showed an effort to escape by members of Islamic State families. 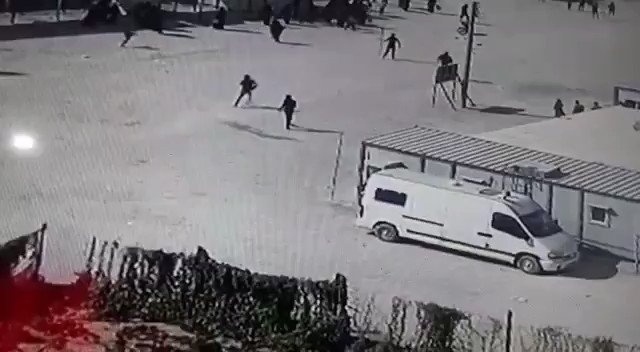 771 people are talking about this

A second video, seen by The New York Times, appeared to show prisoners trying to escape a Kurdish-controlled jail after it was hit by an airstrike.

While the Turkish airstrikes have hit targets along most of the 480-kilometer-long Kurdish-held territory, the ground battle has focused on two small but strategically located Syrian border towns, Tel Abyad and Ras al-Ain.

Turkish troops and their Syrian Arab allies have captured a cluster of villages around the two towns, which lie in the center of the Kurdish region. The troops have in one place established a front line five miles from the Turkish border, the Turkish vice president, Fuat Oktay, said on Friday evening, according to Turkish media.

Their presence has prompted 100,000 residents to flee south, according to United Nations estimates, and forced the evacuation of a major hospital in Tel Abyad that was run by Doctors Without Borders, an international medical charity.

A second hospital, in Ras al-Ain, was also evacuated, according to a separate report by the Rojava Information Center, an information service run by activists in the region.

Turkish mortar shells also landed close to United States troops near the city of Kobani on Friday, prompting a complaint from the American military, the Turkish Defense Ministry confirmed. No one was killed. Turkish officials said the Americans had not been targeted, though the Pentagon said Turkey had known that United States forces were in the area.

At least 54 Kurdish fighters have been killed since Wednesday, along with 42 from the Turkish-backed force, according to tolls compiled by the Syrian Observatory for Human Rights, a conflict monitor based in Britain.

Turkish towns north of the border have also been affected, as Kurdish fighters have returned fire.

Since fighting began on Wednesday, at least 17 civilians, including four children, have been killed in Turkish border towns. At least four Turkish soldiers have died in the fighting, according to Turkish officials.

An entire Turkish border town — Ceylanpinar — was evacuated, after two girls were killed in a rocket strike Thursday and two people were seriously wounded Friday.

Ceylanpinar was largely deserted Friday afternoon, with shops shuttered and only stray dogs and a few men slipping out to chat or buy cigarettes.

“Our city is a ghost town,” complained Musa Sahman, 70, who sells a local raw meat delicacy but had no customers. “Our government is fighting for Syria, but we don’t have any business.”

But the damage has been far worse on the Kurdish side, where 60 civilians have died since Wednesday, according to the Kurdish Red Crescent.

The American decision to ally with Kurdish militias set the stage for Turkey’s invasion this week.

By capturing land previously held by the Islamic State, Kurdish fighters were then able to create an autonomous statelet that now spans roughly a quarter of all Syrian territory and is effectively independent of the central Syrian government in Damascus.

But this dynamic has been chastening for Syria’s northern neighbor, Turkey, which views the central figures in the autonomous Kurdish region as hostile actors with strong connections to a violent Kurdish nationalist group inside Turkey itself.

Turkey’s military campaign has come hand in hand with a crackdown on criticism inside Turkey.

The state-run media authority warned that it would “silence” any outlet deemed to have published material damaging to the offensive. Two editors at separate independent news websites were briefly detained, their outlets reported.

“We will never tolerate broadcasts that will negatively affect our beloved nation and glorious soldiers’ morale and motivation, that serves the aim of terror, and might mislead our citizens with faulty, wrong and biased information,” the media authority said in a statement.

The Turkish incursion has prompted a mixed reaction from the 3.6 million Syrian refugees sheltering in Turkey.

Some fear they will end up being deported to the areas recaptured by Turkish forces in northern Syria, despite having no ancestral links there. Others from the areas of northern Syria currently under attack said they welcomed the campaign.

In Turkey, on a hilltop overlooking the Syrian border and the town of Tel Abyad, a lone Syrian man, Mehmet Huseyn, 45, crouched in the shade of a rusting water tank, scanning the horizon for signs of movement.

His brother and family were in his home village, six miles beyond the ridgeline, while he had been working as a farm laborer in Turkey for four years to support his family of seven, he said.

“Our village is there,” he said. “I am looking in case they leave and we can return home.”

But it pained him to see more war visited on his home. “Our insides are burning,” he said. “We love our land and we love our country.”

Carlotta Gall reported from Ceylanpinar and Akcakale, and Patrick Kingsley from Istanbul. Reporting was contributed by Anton Troianovski from Moscow, Ben Hubbard from Erbil, Iraq, Hwaida Saad from Beirut, Lebanon, and Alan Rappeport from Washington.