Steve Bannon: ‘We went back and forth’ on the themes of Johnson’s big speech | Politics | The Guardian 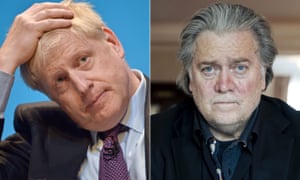 In a London hotel, the far-right activist told how he had exchanged texts with the former foreign secretary on his big resignation speech

On 16 July last year, days after his resignation as foreign secretary, the Daily Telegraph gave most of its front page to the man whose career it had done so much to nurture and promote: Boris Johnson. “He’s back,” roared the masthead. “Boris Johnson returns to his Telegraph column.”

It was a major coup for the paper. Johnson’s column – for which he was paid £275,000 a year – regularly made headlines and it had been missed during the year he had reluctantly given it up to be foreign secretary.

And now he was back. For the paper, it was already paying dividends. Beneath a photo of Johnson, the banner headline on the front page said: “It’s time to believe in our Great Britain.” And underneath, in smaller type: “Boris Johnson in rallying call for the nation to look to a brighter, post-Brexit future.”

In a hotel room in central London, someone was giving careful consideration to the text: the man who had guided Donald Trump’s path to power, Steve Bannon. He seemed to have no doubt: the headline, the framing of Johnson’s forthcoming resignation speech, the “rallying call”, these were the themes he said he and Johnson had “gone back and forth on text” about over the weekend.

He was “unequivocal” about it, says Alison Klayman, the film-maker who captured it while shooting her forthcoming documentary, The Brink.

There’s no doubt the video is terrible timing for Johnson. It’s not just that this link to Bannon, like so many things, is something he has denied. It was nothing more than “a lefty delusion”, he said last summer. And even up until last week, his team was keeping to the line that the contact was restricted to “one text – an invitation to meet that Johnson declined”.

When told there was a video of Bannon talking about it, his advisers changed track. A spokesman told the Observer that the idea of him taking advice from Bannon was “preposterous to the point of conspiracy”. He conspicuously failed to repeat the previous denials about the pair being in touch, however.

But Johnson has been caught in lies before and shrugged them off. It’s why Bannon compares him to Trump. He has described him as “one of the most important persons on the world stage today” and drawn the obvious comparison: “Look at some of the scandals around Trump – the sexism and racism. Nothing sticks. You can’t lay a glove on him.”

But what’s new and potentially toxic for Johnson is what the apparent relationship with Bannon says about him. Johnson’s love life is once again dominating the news, but it’s his engagement with populist far-right politics and rhetoric that could and should worry other people more.

Why? Because Bannon is the man who laid the groundwork for Donald Trump’s victory. First as the executive chairman of Breitbart, the far-right website, and then as Trump’s campaign manager and chief strategist. A man who is open in admiration of both Mussolini and Stephen Yaxley-Lennon, aka Tommy Robinson, the former EDL leader whom he described as “the backbone of Britain” and who has been working with openly racist far-right leaders across Europe.

Tamsin Shaw, a professor of philosophy at New York University who has been researching Bannon’s world view, said: “He collaborated with publishers of neo-Nazi white nationalist websites to turn Breitbart into a platform for the alt-right. And his main initiative in the White House was the Muslim ban.”

Johnson did not welcome the reports last year that first suggested he and Bannon were close. When Matthew d’Ancona, a Guardian columnist who had succeeded him as editor of the Spectator, wrote an article headlined “Ignore Boris Johnson’s sex life. His flirtation with Steve Bannon is the real worry,” he was bombarded with calls from Johnson.

“I stopped counting at 15 – though the calls continued,” he revealed in an article for news website Tortoise this year. Johnson then resorted to texts. The reason: “Boris Johnson was furious with me for writing about his contact with Steve Bannon.”

Specifically, it was d’Ancona’s assertion that Bannon’s advice had led Johnson “to get off his knees and cause some mayhem; and to Johnson’s extraordinary column in the Daily Telegraph shortly thereafter in which he wrote that a Muslim woman wearing the niqab resembled “a bank robber” and that it was “absolutely ridiculous that people should choose to go around looking like letterboxes”. The two were linked,” wrote d’Ancona. “And this disclosure was not to Johnson’s liking.”

For the ‘One Nation’ Tories who have backed Johnson, the video may make uncomfortable viewing. His appeal to the far right, by using dog-whistle, anti-Islam remarks, raises questions about how far down this road he is prepared to go. It was this key period last summer when Johnson moved from courting popularity, d’Ancona believes, to being populist.

And then there’s Nigel Farage. Klayman says Bannon met Farage, as well as other European far-right leaders, during that crucial week. And they’ve long been close. Is there a deal? Between Johnson and Farage? Farage’s funder, Arron Banks, has been hinting at it for weeks: having Johnson as PM and Farage as deputy.

They both fit what Shaw describes as “Bannon’s MO – winning people over to racist views by making them laugh along”. As long as it’s just a joke and “people laugh along with Johnson’s one-liners, they’re effectively disclaiming responsibility for racist views and policies and the people who aren’t laughing are derided as humourless”.

And Johnson has shown no sign of letting up. He described May’s deal as “wrapping a suicide vest” around Britain and, in a parliamentary debate in January, he deployed one of the American right’s favourite themes warning of a “plot by the deep state to frustrate Brexit”.

What’s no longer in doubt is that Bannonism has entered mainstream British politics. Wherever that may lead.

Sorgente: Steve Bannon: ‘We went back and forth’ on the themes of Johnson’s big speech | Politics | The Guardian