Children at the border: the crisis that America wasn’t prepared for | US news | The Guardian 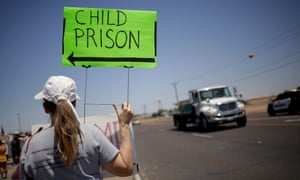 Despite fears stoked by Trump, fewer migrants are arriving at the border than in past years – but most are now children headed to facilities that are ill-equipped to receive them

At a border patrol processing facility in McAllen, Texas on 11 June, a group of lawyers and doctors met a 17-year-old girl from Guatemala. She was in a wheelchair and she held her tiny one-month-old daughter, who was swaddled in a gray sweatshirt so dirty it was almost black. 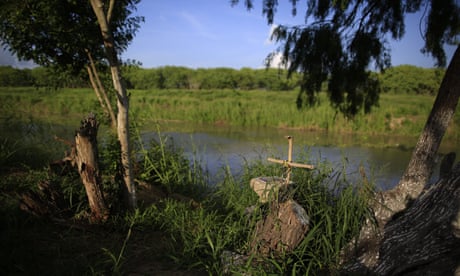 ‘People with no names’: the drowned migrants buried in pauper’s graves

The mother said she had an emergency C-section in Mexico at eight months pregnant. She was in so much pain she couldn’t stand, she said, yet US Customs and Border Patrol (CBP), the agency in charge of screening and processing migrants, had told her it couldn’t release her unless she could walk.

“I took a Kleenex with water and I washed dirt, black dirt, off her neck,” said Hope Frye, an immigration attorney, of the infant she now calls “Baby K”. When Frye and the rest of the group saw the mother the next day, Baby K was shaking violently and cold to the touch. The sweatshirt had been replaced with a thin, threadbare towel.

On 13 June CBP released Baby K and her mother for immediate medical attention, after Frye and her team, worried the premature baby might die, publicized their condition.

The facility in McAllen was not designed to hold Baby K and her mother. But over the past month, reports have emerged that hundreds of children are being detained in such processing centers for weeks, in squalid conditionsone eyewitness called “affirmatively cruel”.

The US immigration system is failing to accommodate children and families seeking legal asylum. Experts say it is a manufactured crisis, designed to create a backlog, drive political support for the president’s hardline policies and, in theory, deter migrants from crossing the border.

As a policy, it is not working. The number of children and families arriving at the border seeking asylum – a process the US is required to observe under international law – has increased as conditions in Central America have become more desperate. In the early 2000s, the majority of those apprehended at the border were single male workers, predominantly from Mexico. Most are now children and families seeking asylum. According to CBP data, about 72% of those apprehended at the border in May were families or children. In 2012, only 10% were families or children.

The vast majority of these migrants are from El Salvador, Guatemala and Honduras – countries where political turmoil, economic instability and violence have been exacerbated by the climate crisis and past US intervention.

But despite fears stoked by the Trump administration, the number of migrants arriving at the border is lower than in previous years, hovering between 400,000 and 600,000 annually, less than half the 1.6m who were apprehended in 2000.

The shift toward children and families “didn’t happen overnight”, said Michelle Brané of the Women’s Refugee Commission. Though activists have broadcasted the need to prepare for such a more vulnerable population for years, she added, processes and infrastructure at the border still “have not adapted for the new demographic”.

Pictures of dead migrants inspire our sympathy. But what use is that to them?

When a person presents themselves to CBP, either at a legal point of entry or to an agent, they are taken to a facility for processing. These facilities are designed for short-term stays – some are tents or converted warehouses – because the system functions primarily to process single male workers.

The facilities are so ill-equipped for the detention of children that CBP cannot hold unaccompanied minors, anyone under 18 who is not with a parent or legal guardian, for more than 72 hours. After that period, CBP is supposed to release such migrants to the Office of Refugee and Resettlement (ORR), an agency within the federal Department of Health and Human Services, which matches them with shelters.

A group of volunteer lawyers and doctors granted access to border patrol facilities as part of ongoing litigation against the US government found children were being held at processing facilities beyond 72 hours. Some had been there for more than two weeks.

My daughter and I have been sleeping on the floor with just a blanket, no mattress for two weeks

On 27 June the group filed a lawsuit against the federal government for violating the Flores agreement – a legal protection that guarantees migrant children be kept in safe and sanitary conditions – and demanded immediate inspection of processing centers by public health officials, to “prevent more illnesses and deaths at the border”.

In testimony, children at one processing facility in Clint, Texas said they were not being given soap or toothbrushes. Some said they were sleeping on the concrete floor. Others slept in overcrowded cells next to open toilets. In a cell that held 45, six minors including four under the age of two got lice. Two combs were passed around for uninfected children to share.

Clothes were covered in mucus, vomit and, for young teenage mothers, breast milk. Time outside was rare: one young boy told a lawyer he looked forward to when the CBP officer came into the cell to clean, as he and the other kids could then play in the hallway.

“My daughter and I have been sleeping on the floor with just a blanket, no mattress for two weeks,” testified a 17-year-old mother from Guatemala in court documents. “I am in a ‘girls only’ cell, with a toilet separated by a partial wall. The girls help each other by holding up blanket for some privacy when we go to the bathroom.”

Five minors have died in US custody after crossing the border. Most recently, in May, a 16-year-old boy from Guatemala died after he got the flu at a border patrol processing center in McAllen, Texas. Two days later, CBP announced that three-dozen migrants were quarantinedwith the flu at the center.

“It’s profoundly dystopian to think that in 2019 this is being done in the hands of the United States,” said Warren Binford, director of the clinical law program at Willamette University, who visited the facilities earlier this month.

A majority of the children interviewed at the Clint facility had been separated from their familial guardians, Binford said. Trump ended his blanketed “zero tolerance” family separation policy after intense backlash and issued an executive order that said the federal government would prioritize family unity. But the order, currently in litigation, still gives the government the right to separate children from their families “where appropriate and consistent with law and available resources”.

The Trump administration has also shut down avenues out of detention, cancelling a refugee program for children traveling from Central America and no longer allowing migrants to stay with family or community members until their asylum court hearing. Previously, CBP would only detain those “who they have a reason to believe would be a risk to public safety or a flight risk”, said Brané, of the Women’s Refugee Commission.

The Trump administration, she added, does “the reverse: they detain everybody they possibly can until they have no beds left.” Asylum seekers such as Baby K and her mother remain trapped in limbo as processing centers overflow.

This backlog and paralysis is “intentional”, Brané said, adding that the administration’s strategy has “been very clear from the moment [they] came in to power: make the conditions untenable so that people will not come. Punish, and deter people from requesting asylum”.

Experts say there is a political gain for Trump when he creates a backlog at the border. Hardline immigration policies are popular with Republicans: in a CNN poll conducted last summer, 58% of Republicans polled said they approved of family separation.

“If it looks like our border is being overrun, there’s going to be a lot more political will for some of the president’s political goals, which is building walls [and] limiting all kinds of immigration,” said Jennifer Podkul, senior director for policy and advocacy at Kids in Need of Defense, a human rights not-for-profit group.

“This administration has used immigrants as political pawns since day one.”

Crowded and unsanitary conditions in shelters, Brané said, are the logical result of the administration’s choices, not an issue of funding.

CBP officials have denied the lawyers’ reports about the Clint facility and Trump has refused to take responsibility for it conditions, pushing the blame on to Congress.

“The laws are so bad and the asylum rules and laws are so bad that our border patrol people, who are so incredible, aren’t allowed to do their jobs,” the president told reporters on Tuesday.

But disturbing details reported from Clint and a graphic photo of a father and daughter drowned while crossing the Rio Grande have stoked outrage in Washington, leading to the resignation of the acting head of the CBP, John Sanders.

On Thursday, Congress allocated $4.5bn in supplemental funding to border. It passed despite concern from House progressives that the measure did not include accountability measures for the Trump administration.

Sorgente: Children at the border: the crisis that America wasn’t prepared for | US news | The Guardian