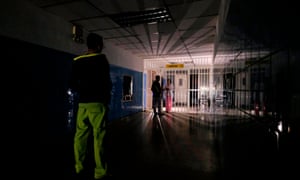 Venezuela’s defense minister has accused the United States of masterminding a crippling power cut that has left virtually the entire South American country without electricity and stirred fears that its crisis could be entering a volatile new phase. 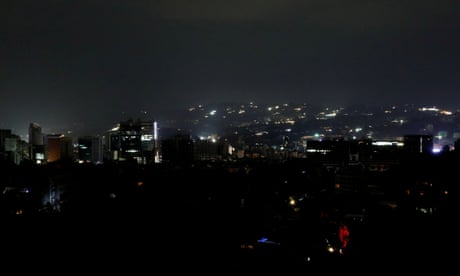 Venezuela: ‘country has stopped’ as blackout drags into second day

In a televised address from the Miraflores presidential palace in Caracas, Vladimir Padrino López claimed the “North American empire” was behind a “criminal aggression” designed to “disrupt and attack” Nicolás Maduro’s beleaguered administration.

Nearly all of Venezuela’s 23 states were cast into darkness on Thursday afternoon after the most severe power cut in the country’s recent history.

“No one can be so naive to think this was the result of bad luck or chance,” Padrino López said on Friday as millions of Venezuelan citizens prepared for a second night in the dark.

Padrino López claimed the alleged US “attack” – supposedly conducted against the Guri hydroelectric plant in southern Venezuela that supplies much of the country’s electricity – had been “prepared, planned and well-defined” in Washington and admitted it had caused “difficulties”.

But Padrino López insisted Maduro’s officials and the armed forces were fighting back. “We are here to transmit a message of peace to all of the Venezuelan people … all is calm.”

Earlier, the vice-president, Delcy Rodríguez, denounced the incident – which experts attribute to mismanagement, corruption and poor maintenance – as part of “a perverse plan” to overthrow Maduro.

Hugo Chávez’s political heir is facing a battle to retain power after the opposition leader Juan Guaidó declared himself Venezuela’s rightful interim leader on 23 January and was recognized by most western governments, including the United States and Britain.

But Maduro has hardly been seen or heard from since the lights went out, his only public statements coming in the form of two tweets in which he blamed the US and vowed: “We will prevail!”

In contrast, Guaidó appeared at a rally in Caracas where he urged his supporters to return to the streets for fresh protests on Saturday and claimed they were “very, very close” to forcing Maduro from power.

The Venezuelan capital was eerily quiet on Friday as fears grew over the human cost of the blackout and its potential to further unsettle the crisis-stricken country.

At one of the city’s maternity wards an Associated Press reporter saw crying mothers watch nurses use candles to monitor the vital signs of their premature babies after backup generators shut off.

Alberto Paniz-Mondolfi, a doctor in the state of Lara, warned lives would be lost as a result of the devastating outage. “This is terrible. There will end up being countless deaths.”

María Zárate, a 24-year-old mother who was at the José Manuel de los Ríos hospital in Caracas with her son when the lights went out, described scenes of chaos as nurses sprinted down corridors in search of manual resuscitators that might keep its young patients alive.

“It was insanity,” Zárate recalled. “We are adrift because we just do not know what is going on.”

Bruno Loyo, a grocer from downtown Caracas, said: “This is a total collapse.”

“I don’t believe it was sabotage,” Loyo added. “What I believe is that there has been no maintenance at the [power] plants.”

Maduro opponents also rubbished suggestions the outage was the result of an anti-government conspiracy.

“Guri has collapsed because of a lack of maintenance, just like the thermoelectric plants and the transmission and distribution lines,” tweeted Hugo Chávez’s former oil minister, Rafael Ramírez, who went into exile after splitting with Maduro in 2017.

“It is the incapacity and the indolence of this government that have led us to this total collapse.”

Giancarlo Fiorella, the editor of the In Venezuela blog, said the government routinely blamed political foes for such increasingly common failures.

“But they’ve never come close to providing any kind of evidence. It is much more likely that this is one of the symptoms of an electrical system that we know has been in crisis for at least a decade.” 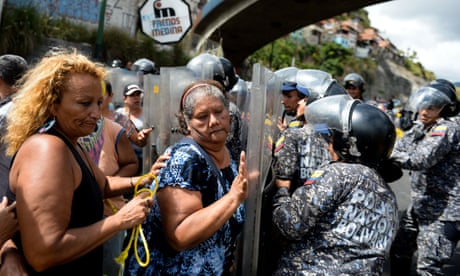 ‘A slow-motion catastrophe’: on the road in Venezuela, 20 years after Chávez’s rise

Fiorella said the power crisis was the result of “neglect, disrepair and corruption at the highest levels of the Venezuelan government – precisely the same things that are leading to the crisis in the healthcare sector, the economic crisis. This is one of the facets of the Venezuelan crisis.”

Gedan, a senior adviser at the Wilson Center’s Latin American program, said he doubted ordinary Venezuelans would buy into claims the US had caused the blackout.

“Venezuela’s infrastructure is in a shambles, and people suffering from the blackout are unlikely to blame outside actors. That said, the United States has taken an aggressive posture [towards Maduro] that is bound to fuel conspiracy theories,” he said.

Local newspapers said the blackout began at about 4.52pm on Thursday and affected nearly the whole country.

Flights in and out of Venezuela’s decaying airports were suspended and at the airport in Colombia’s capital, Bogotá, would-be passengers grew impatient and frustrated as staff announced that their flight to Caracas would be delayed by at least nine hours.

“I’ve never heard of a power cut this big and lasting this long,” complained one Venezuelan traveller. “Every time I go back home it gets worse, but what can we do? This is the country we have.”