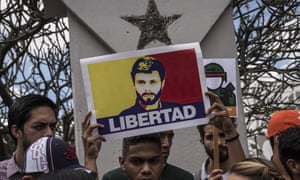 Leopoldo López led the opposition’s challenge to Maduro from house arrest but could his protege thwart his own ambitions?

by Joe Parkin Daniels in Cúcuta, Tom Phillips in Caracas and Sabrina Siddiqui in Washington

When Juan Guaidó declared himself Venezuela’s interim president last month, he appeared to leapfrog a generation of rival opposition leaders and offer a dramatic way past the infighting and tactical differences that had hobbled previous efforts to unseat Nicolás Maduro.

But the rise of the fresh-faced opposition leader was orchestrated by a Harvard-educated economist with a checkered history in Venezuelan politics, who continues to direct opposition strategy and coordinate with US and regional officials from under house arrest in Venezuela. 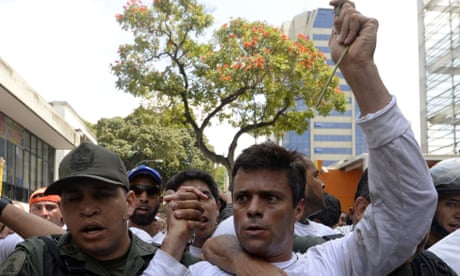 Interviews with Venezuelan opposition figures and officials in Washington have confirmed that Leopoldo López, a divisive former mayor of a Caracas borough, helped engineer Guaidó’s meteoric rise – and still harbours ambitions to become Venezuela’s next president.

Since 2017, López – a distant relative of the South American revolutionary hero Simón Bolívar – has been confined to his home in the moneyed Chacao district of Caracas where he once served as mayor.

But he handpicked Guiadó to lead his People’s Will party in congress and continues to play a central role in the campaign to force Maduro from office.

“Leopoldo’s in contact with everyone, every day, constantly,” López’s wife, Lilian Tintori, told the Guardian. “He’s been sewing together an opposition that’s totally united and strong and pushing in the same direction, which is what we are seeing now.”

López has long been a polarising figure, advocating a more confrontational approach than some other opposition leaders. “He is often described as arrogant, vindictive, and power-hungry – but party officials also concede his enduring popularity, charisma, and talent as an organiser,” a Caracas-based US diplomat wrote in a 2009 cable published by WikiLeaks.

After anti-government protests in 2014, López was given a 14-year prison sentence for inciting violence, following a trial activists denounced as politically motivated and flawed.

Moved to house arrest in 2017, López is barred from speaking to the press and remains under close guard by police who take his photo with a copy of the day’s newspaper every four hours – “like a hostage”, Tintori said. But using encrypted messaging apps, he remains in contact with other opposition activists in Venezuela, Colombia and the US. 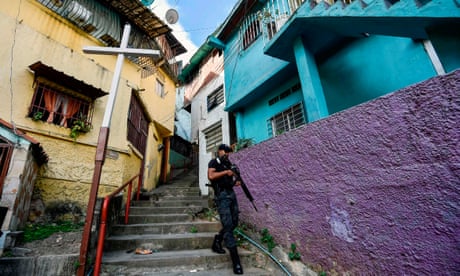 ‘They are murderers’: special forces unit strikes fear in Venezuelans

Convinced that support from the White House would be crucial to toppling Maduro, López and his allies have made a concerted effort to win over the Trump administration.

Sources confirmed scores of meetings between US officials and López surrogates – including Tintori – in Washington and around the globe.

In February 2017, Tintori dined with Donald Trump at the White House, in a meeting facilitated by Senator Marco Rubio, who has been instrumental in shaping Trump’s Venezuela policy.

Hours later, the president tweeted a photo of himself with Tintori, Rubio and Vice-President Mike Pence, calling for López to be “immediately” freed.

“The Trump administration took a side, supporting the Venezuelan people because they know how we suffer,” Tintori said. She added that similar lobbying efforts with the Obama administration – including a meeting with the then vice-president Joe Biden in February 2015 – had achieved less.

The restrictions on López – and the fact Tintori’s passport was revoked in September 2017 – have required him to delegate many diplomatic responsibilities to exiles.

One such figure is David Smolansky, a former mayor from López’s party, People’s Will, who fled Venezuela in disguise in late 2017 when a warrant was issued for his arrest and now lives in Washington.

Another is Carlos Vecchio, López’s friend and fellow a Harvard graduate, who arrived in Washington in 2014, also after fleeing Venezuela.

“This effort we are now seeing really got going when we decided not to participate in the fraudulent elections last May,” said Vecchio, who was recently appointed Guaidó’s ambassador to the US. “That’s when we decided to get a real movement going around the world not to recognise Maduro as legitimate on 10 January.”

Desperate to build momentum, Vecchio and Smolansky worked their contacts in Washington, including Rubio and the Democrat Bob Menendez.People’s Will members also took advantage of the 175 embassies hosted in the US capital, speaking with diplomats from around the world, especially Latin America.

“We started working to get people not only to declare Maduro as illegitimate, but to recognise the leader of the national assembly as the constitutionally legitimate interim president of Venezuela,’ Vecchio said.

The campaign was further boosted last year when Brazil and Colombia elected rightwing leaders, Jair Bolsonaro and Iván Duque, both of whom had campaigned promising a harder line towards Maduro.

The multi-pronged diplomatic assault yielded the results López had been waiting years for when Juan Guaidó received a call from Pence on 22 January.

A US official with knowledge of the call said Pence promised Guaidó that the Trump government would back him if he took the presidential oath amid mass demonstrations planned for the next day.

Guaidó took the oath – and the US was as good as its word, recognising him as Venezuela’s president within minutes.

The move took many diplomats and members of the opposition by surprise, but by the evening of 23 January, a dozen Latin American countries and Canada – who Tintori had also been lobbying – had followed suit.

“Guaidó’s courageous efforts to restore democracy and constitutional order come at great risk to himself and his family, but he has broad international support as nations worldwide recognise Maduro as Venezuela’s criminal usurper,” Rubio told the Guardian, adding that the US would continue to play an important role, through diplomatic recognition, financial and humanitarian aid.

For now, the focus remains on Guaidó – a previously little-known politician transformed into an overnight celebrity.

But those close to López doubt he will stay in the background forever. And some suspect it is only a matter of time until he seeks the keys to the presidential palace himself.

“Obviously there are aspirations. There are people that want to be there, right?” said Juan Andrés Mejía, another prominent party member and López ally. “In People’s Will we have a candidate, who is Leopoldo. Juan [Guaidó] is playing a huge role at this point, which is allowing a transition to happen.” 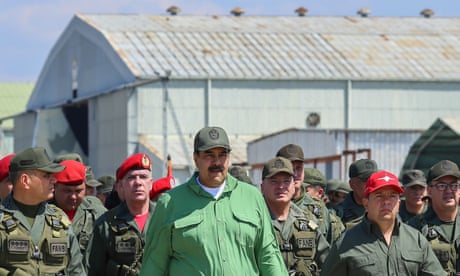 What next for Venezuela? The four most likely outcomes

But some believe López’s ambitions could be derailed by the sudden rise of his protege. Guaidó has captured the hearts and minds of millions of Venezuelans, and López may find his dreams of leading Venezuela have to be put on hold.

“Guaidó is a messianic figure now,” said Vanessa Neumann, president of the risk analysis firm Asymmetrica and occasional adviser to various opposition members. “If he calls free elections, Guaidó will win. He will be our president for the next six years – and Leopoldo will hate that.”

Mejía insisted that the end – restoring democracy to Venezuela – was more important than the means and hinted Guaidó could still emerge as the opposition candidate to be Venezuela’s next president. “We will see. Maybe he will be [the candidate] and that would be great … who knows?”

“Our objective is very clear – free and fair elections in the shortest time possible and from there on, we are willing to discuss the rest,” Mejía added.

When asked if López still harboured ambitions to become president, Tintori said: “Leopoldo has always fought for Venezuela, even when he was silenced and jailed in horrible conditions. He is a public servant with a plan for this country, and that is what we are seeing with everything he has done with Guaidó.”