Israeli settlers cut down 300 olive trees in the village of al-Jab’ah, Hebron District 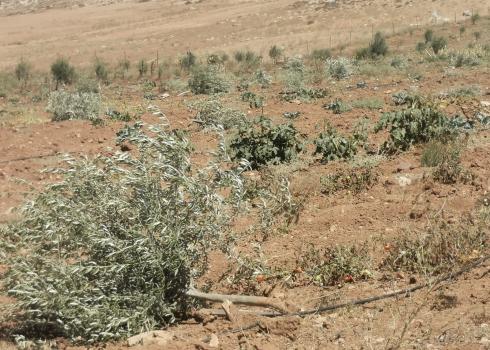 Israeli settlers cut down 300 olive trees in the village of al-Jab’ah, Hebron District

In a testimony he gave B’Tselem field researcher Musa Abu Hashhsash on 15 October 2020, Khaled Masha’lah (69), a father of six from the village of al-Jab’ah in Hebron District, spoke about 300 olive trees settlers cut down in his plot:

I own 7 hectares of land east of al-Jab’ah, about a kilometer from my home. Twenty years ago, I planted olive trees there. I’ve tended to them ever since because they’re my family’s source of income. I’ve enjoyed the olive harvest in the last four years, and every year the yield has been better. I estimated that I’d harvest half a ton of olives this year.

Last Saturday, 10 October 2020, I went to my land to check on the trees. I was thrilled to see the fruit and planned to come back a week later to start harvesting. Three days later, on Tuesday, 13 October 2020, my wife and I were harvesting olives in another plot we own when I got a phone call informing me that my trees in Jab’ah had been damaged. I left everything, drove to my plot and met my neighbor there. I was shocked by what I saw! I can’t describe how I felt in those moments. I cried, not only over the olive trees but also over the hard work I’d invested in them for twenty years. My wife and I tended to the land from morning till night. We cared for the trees the way you care for children.

I called the Israel Police and told them that 300 olive trees, six of them 100 years old and the rest 20 years old, had been cut down. The next day, police officers came to the plot and photographed what was left of the trees. Then an officer from the Israeli DCO spoke to me on the phone. I think the vandals were settlers from Bat Ayin. I assume they came at night, because the day before, my neighbor was grazing his flock in the area and told me the trees were fine.

I don’t know what I’m going to do now. Twenty years ago, I had more strength. I would walk a kilometer carrying water for irrigation and tools by hand. It was tough, but I did everything I could to get to the land and take care of the trees. Now I’m older and can’t do things like that anymore.