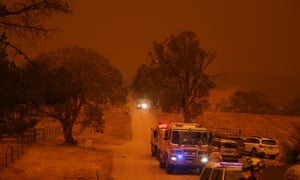 Members of the New Zealand military are en route to Australia to assist with the efforts, adding to the 157 New Zealand firefighters already deployed in Australia, some of whom have been assisting their Australian colleagues since October.

New Zealand’s minister of defence, Ron Mark, said more help was urgently needed because the fires showed no signs of abating and thousands of people and homes remained in harm’s way.

Australia stood by us through some horrific moments in 2019, and we’re here to do the same.

Three Royal New Zealand Air Force NH90 helicopters and crew, two army combat engineer sections and command elements have been sent to support the Australian Defence Force. They will be deployed at the Edinburgh defence base in Adelaide, South Australia, and are expected to remain until at least the end of January.

Prime Minister Jacinda Ardern posted on Facebook: “This is by no means the only thing we can do to help, and we’re at the ready and talking to our neighbours frequently.”

On Friday, Ardern announced an additional 22 New Zealand firefighters would come to Australia. “It’s been devastating to watch from afar, I can only imagine what it feels like to experience it directly,” Ardern said.

“I’ve been in contact with the Australian PM again this week to share our support and to offer whatever we can to help. Australia stood by us through some horrific moments in 2019, and we’re here to do the same.”

James Marape, the prime minister of Papua New Guinea, said 1,000 soldiers and firefighters from his country were standing by, ready to be deployed if requested by his Australian counterpart Scott Morrison, with whom Marape said he had been in “constant contact over the last few weeks”.

“Australia is the closest friend of PNG and is always the first in PNG in our times of adversities and we offer our hearts and our hands to you in this time of fire-induced tragedies,” Marape said in a statement.

The governor of Papua New Guinea’s National Capital District also called for PNG to support Australia, saying that the governments of the two countries should look to establish a pipeline that would allow PNG to pipe water to Australia during the dry season.

“As a Pacific neighbour and friend, we have watched as Australia has been devastated by these horrific bushfires. We offer whatever assistance we can in this time of need, as Australia has always done in ours,” said acting prime minister Jotham Napat.

Napat said his country had “watched in awe” at the work of the volunteer firefighters. “It shows the true Australian spirit and one which we are very proud of, as your friend and neighbour.”

Fijian prime minister Frank Bainimarama tweeted that he had “written to Scott Morrison to offer Fiji’s assistance in any way we can to deal with this crisis.”