The Brexit party is revving up for the election. Expect to see a lot more Farage | Darren Loucaides | Opinion | The Guardian 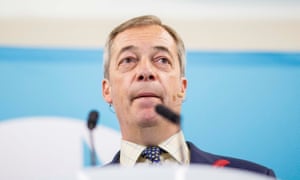 All is not well in the Brexit party. Some of its MEPs in Brussels have been wondering why they would stand against Brexiteer Conservatives in the upcoming general election. Arron Banks, ally and erstwhile financial backer of its leader, Nigel Farage, has been criticising a strategy that risks splitting the leave vote.

But Farage is having none of it. At his party’s campaign launch, he reiterated his plan to contest more than 600 seats in the general election. And, although he repeated his offer of a leave alliance with the Conservatives, he knows that there is little chance Boris Johnson will accept and increase the likelihood of disruptive Brexit party MPs in the Commons come 13 December. After all, as things stand there’s every chance the party won’t win a seat.

Farage’s empty offer means he can portray his party as having been forced into contesting every seat. He has also demanded that Johnson bin his Brexit deal, which similarly allows him to position his party as the only one offering a “clean break” from the EU. Given how much Johnson has managed to squeeze the Brexit party in the polls, it’s a desperate attempt to find a much-needed USP.

The Brexit party has largely avoided immigration as a subject, but not at a recent rally I attended in Maidstone

The Brexit party is currently polling about the same or worse than Farage’s old party, Ukip, was ahead of the 2015 election, when it failed to gain any seats despite attracting 4 million votes. Which may explain why Farage has announced he’s not standing as an MP. After failing seven times to win a seat in Westminster, his critics say that he is afraid to run and risk losing again.

But this may not be the only explanation. Farage has learned plenty of lessons from Italy’s Five Star Movement, having adapted the party’s digital-populist model to the Brexit party. And Farage has expressed his admiration for how Five Star’s co-founder Beppe Grillo “changed Italian politics” while never actually standing as a candidate. Even outside Westminster, Farage has enormous influence over British politics.

Institutionally, the Brexit party is not Ukip. It’s a modern, digitally run machine, tightly controlled. It is very much Farage’s own show. He has said he owns 60% of the party-company. And, as owner, is impossible to oust. As Banks described it to me in May, the Brexit party’s digital structure allows for “almost a dictatorship at the centre”: it won’t be as easily hobbled by internal strife, as Ukip has continually been.

And at HQ, the plan to run candidates in most constituencies has been under way since the summer, when the party invited prospective candidates to apply through an online portal. It was no small task to vet 600 candidates, but by August the first batches were already being announced. On Monday, hundreds of candidates were paraded before the media as they submitted their nomination papers. There is little chance of Farage calling the dogs off.

The real question is where he will concentrate resources. Although backed by a few rich donors, not least party chair and MEP Richard Tice (who has just announced he will be standing in Hartlepool), as well as donations from “registered supporters” (the party doesn’t have members), its war chest can’t match the Conservatives’ one. The party will naturally focus on 20 or so key seats, regardless of whether it stands candidates in hundreds more.

Farage and his strategists will have been preparing for months their assault on these target seats, and amassing data on them. They have been campaigning, with sizeable rallies in select places around the country, since April. Determined to crack the first-past-the-post voting system, they will be ruthless about focusing resources on the seats where internal data shows them they have the best chance.

But given the polling, and Johnson’s shift even further to the right, this still may not be enough. So, as a former senior Ukipper told me, Farage may start resorting to shock tactics, as he did in 2015, when he scaremongered about HIV-positive migrants using NHS services, deliberately stoking controversy. And it was in the final stretch of the referendum campaign that Farage unveiled the infamous “breaking point” poster.

The Brexit party has largely avoided immigration as a subject, preferring to focus entirely on Brexit. But at a recent rally I attended in Maidstone, Farage attacked the UK’s “open door to limitless numbers of people” and Jeremy Corbyn’s “betrayal” over the issue – which drew raucous approval from the 1,000-strong crowd. When Farage is flagging in the polls, he lurches towards anti-migrant sentiment.

But there may be another wildcard in the deck. According to Electoral Commission rules, Farage has until 4pm on Thursday 14 November – the deadline for submitting nomination papers – to change his mind about standing as an MP. Farage may have just snatched an extra fortnight, between announcing he wasn’t standing and the actual deadline, from rival parties who otherwise would use the time to build a ground campaign against him in his chosen constituency. And if Farage leaves it to the very last moment, his opponents will have no time to select strong candidates to fight him.

While Farage’s decision not to stand sounded unequivocal, this is the man who twice walked away from frontline politics, and returned. It might be wise to keep eyes peeled come 4pm on Thursday.

• Darren Loucaides is a writer based in Barcelona and London

Sorgente: The Brexit party is revving up for the election. Expect to see a lot more Farage | Darren Loucaides | Opinion | The Guardian