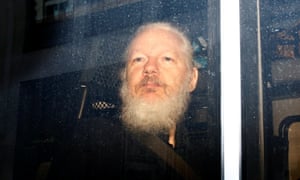 Prosecutor says country will not proceed with investigation into WikiLeaks founder

Swedish authorities have discontinued an investigation into a rape allegation against the WikiLeaks founder, Julian Assange, after a review of the evidence.

The deputy chief prosecutor, Eva-Marie Persson, said the complainant’s evidence was deemed credible and reliable, but that after nearly a decade, witnesses’ memories had faded.

“After conducting a comprehensive assessment of what has emerged during the course of the preliminary investigation I then make the assessment that the evidence is not strong enough to form the basis for filing an indictment,” Persson said. An appeal against the decision could be made to the office of Sweden’s attorney general, she added.

Assange, who is battling extradition to the US, which accuses him of publishing secret documents related to his WikiLeaks work, has been facing potential charges in Sweden since 2010. The 48-year-old has denied all allegations against him.

Swedish prosecutors dropped their preliminary investigation into the rape allegation in 2017, because they were unable to proceed while Assange remained in the Ecuadorian embassy in London. He had been living there since 2012 after seeking refuge to avoid arrest after Sweden asked Britain to extradite Assange for questioning.

However, the investigation was reopened in May this year after Assange was removed from the embassy when the Latin American government abruptly withdrew his asylum. He was immediately arrested and is serving a 50-week sentence in Belmarsh prison in south-east London for breaching bail conditions.

Persson said in May that the circumstances allowed for an extradition to Sweden from Britain, and that an interview should be conducted with Assange.

Persson said the investigators had collected additional documentary evidence since reopening the inquiry and that further interviews had been conducted with five witnesses who had already spoken to officials.

Two people who had not been interviewed had also been spoken to, while one interview took place in Denmark following a request for international judicial assistance involving that country.

However, after additional investigations over the summer and autumn it was clear that the oral testimony given in support of the woman had weakened, Persson said on Tuesday. This was primarily because a long time had passed and memories had faded for natural reasons, she added.

Tuesday’s decision follows a ruling in June by a Swedish court that Assange, who denies the accusation, should not be detained.

Tuesday’s decision was welcomed by WikiLeaks, which called for a focus on the threat of extradition to the US.

Kristinn Hrafnsson, the WikiLeaks editor-in-chief, said: “Sweden has dropped its preliminary investigation into Mr Assange for the third time, after reopening it without any new evidence or information.

“Let us now focus on the threat Mr Assange has been warning about for years: the belligerent prosecution of the United States and the threat it poses to the first amendment.”

A statement issued by the Swedish prosecuting authorities said: “The preliminary investigation concerning allegations against Julian Assange was resumed on 13 May 2019 after Assange left the Ecuadorian embassy in London.

“The investigation relates to a suspected rape committed in August 2010. A number of investigative measures have been conducted since May, largely in the form of witness interviews.

“The preliminary investigation has now been discontinued, the motive for which is that the evidence has weakened considerably due to the long period of time that has elapsed since the events in question.”

A spokesman for Assange’s legal team said: “From the outset of Sweden’s preliminary investigation, Julian Assange’s expressed concern has been that waiting in the wings was a United States extradition request that would be unstoppable from Sweden – and result in his spending the rest of his life in a US prison.

“Now that the US does seek Mr Assange’s extradition to stand trial on unprecedented charges for journalistic work, it continues to be a matter of extreme regret that this reality has never been properly acknowledged and that the process in Sweden – with which Mr Assange has always expressed his willingness to engage and indeed did so – became so exceptionally politicised itself.”