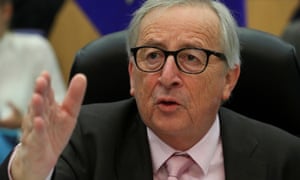 Brexit has worsened Britain’s problems, the outgoing head of the European commission has said in another parting shot at the UK government.

Jean-Claude Juncker, who is standing down as head of the EU executive, delivered a typically blunt assessment in an interview with Germany’s public broadcaster, ARD.

“Britain also has problems other than Brexit and these problems have got bigger with Brexit. They are trying to cover that up, but they just got bigger,” he said.

Juncker also described Britain’s departure from the European Union as a perpetual cycle of “promises, promises not kept, and lies repeated over and over again”, two days after he accused Boris Johnson of telling “so many lies” during the 2016 campaign.

In contrast, Juncker struck a more diplomatic note in an interview with the BBC, saying that he liked the prime minister.

The veteran EU leader did not elaborate on what he perceived as lies. He may have been referring to the infamous NHS spending pledge on the Vote Leave campaign bus that was described by the UK Statistics Authority at the time as “misleading” and undermining trust in official statistics.

He may also have had in mind another central claim of the leave campaign that Turkey and four other countries could join the EU by 2020, a statement not supported by anyone who follows EU enlargement. Juncker announced a five-year freeze in EU enlargement in 2014, while Turkey’s accession hopes were on the rocks long before the 2016 referendum.

In a blow to Labour, Juncker described Jeremy Corbyn’s party’s plan to renegotiate the Brexit deal as unrealistic, although he also noted it would be up to his successor to decide if there was “room for manoeuvre for a new deal or a new treaty”.

Privately, sources appear more receptive to a request from Labour to renegotiate the political declaration on the future EU-UK relationship. The non-binding declaration, which is Labour’s biggest problem with Johnson’s deal, points to a free-trade agreement that it claims would reduce GDP per capita by up to 7% within a decade. One diplomat told the Guardian recently it could be rewritten “overnight”.

The commission president also expressed scepticism about Conservative hopes of negotiating a free-trade deal in 11 months, telling the BBC it would “take time”.

The EU’s chief Brexit negotiator, Michel Barnier, has said a basic free-trade agreement could be agreed with in 11 months, but has also noted the negotiation would be “difficult and demanding”.

Brussels is also unconvinced by Johnson’s pledges to avoid extending the transition period beyond 2020. Barnier said the summer of 2020 would be “a moment of truth” to see whether an extension of the transition will be needed.

Juncker, a veteran political fixer with four decades’ experience in Luxembourg and Brussels, has made several key interventions during Britain’s departure, most recently sealing the deal with Johnson over a course of two telephone calls on 17 October.

He will be succeeded by Ursula von der Leyen, whose start date remains in doubt because of problems getting her team approved by the European parliament. She is meeting Tony Blair in Brussels on Wednesday at his request. The commission and the former Labour prime minister’s Institute for Global Change declined to comment on details of the meeting.