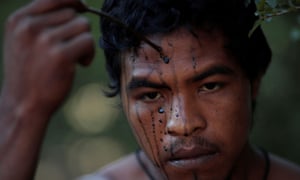 A Brazilian indigenous land defender has been killed in an ambush by illegal loggers in an Amazon frontier region.

According to a statement by the Brazilian Indigenous Peoples Association, Paulo Paulino Guajajara was shot and killed inside the Araribóia indigenous territory in Maranhão state. Another tribesman, Laércio Guajajara, was also shot and hospitalised and a logger has been reported missing. No body has yet been recovered.

Sérgio Moro, the justice minister of far-right president Jair Bolsonaro’s government, confirmed that Brazil’s federal police were investigating the killing. “We will spare no effort to bring those responsible for this serious crime to justice,” he tweeted.

The tribesmen are members of an indigenous forest guard called Guardians of the Forest, which formed in 2012 to ward off logging gangs pillaging their rare, hardwood-rich reserve.

Their work involves armed patrols and destroying logging encampments and has earned them dangerous enemies. Several Guardians in Maranhão have been killed in recent years, including three from Araribóia.

According to Gilderlan Rodrigues, Maranhão regional coordinator of Brazil’s indigenous missionary council, the murdered tribesman had been threatened several times. “Their work bothers those that want to loot their territory,” he said, adding that the killers were from a nearby rural settlement and had entered the reserve without permission. “These criminal actions must be combated so that more lives are not lost.”

The 4,130 sq km (1,595 sq miles) Araribóia indigenous reserve is home to an estimated 5,300 indigenous Brazilians of the Guajajara tribe and the Awá, an isolated group described as the “world’s most endangered tribe”. It concentrates much of the last remaining Amazon rainforest in Maranhão state.

Sarah Shenker, senior research and advocacy officer at Survival International, who knew the murdered tribesman, described it as an “island of green amid a sea of deforestation”. She said the killing was “a crime foretold”.

Earlier this year Paulino told Survival International: “It makes me so mad to see this [forest destruction]. These people think they can come here, into our home, and help themselves to our forest? No. We won’t allow it. We don’t break into their houses and rob them, do we? My blood is boiling. I’m so angry.”

The reserve is officially protected by the Brazilian government but is constantly targeted by logging gangs and has long been a hotbed of violent conflict. In 2015, a former enforcement operations coordinator with Brazil’s environmental agency Ibama, Roberto Cabral, was shot there.

In June this year, the Araribóia Guardians’ leader, Olímpio Guajajara, recorded a video calling for help from the Brazilian state after reporting that gunmen were being paid to kill them and indigenous houses had been shot at.

“We don’t want war, we want to resist,” he said. “We want the Brazilian authorities to help protect the lives of the Guardians that are threatened.” The video was sent to the Brazilian government.

Few land conflict-related killings in Brazil result in convictions, which advocates say has produced a culture of impunity. According to Brazil’s pastoral land commission, a rural violence watchdog, of 157 land conflict killings in Maranhão state between 1985 and 2017, just five cases went to court.

Since the beginning of this year, when Bolsonaro took office, observers noted that attacks and invasions of indigenous lands had soared in Brazil as environmental and indigenous protection agencies suffered cuts and interference.

“The indigenous genocide of Brazil is legitimised by the discourse of the president,” said indigenous leader Sonia Bone Guajajara, who is from the Araribóia reserve and is currently in Europe with the campaign Indigenous Blood: Not a Single Drop More.