Bolsonaro wants to end democracy in Brazil. Here’s one way he could do it | David Miranda | Opinion | The Guardian 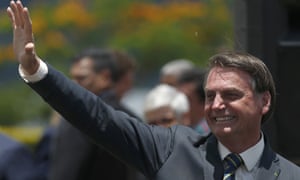 Bolsonaro wants to end democracy in Brazil. Here’s one way he could do it

he challenges to democracy and civic order in Brazil, the world’s fifth most populous country, have increased significantly in the past couple of weeks. As dangers to Jair Bolsonaro, the Brazilian president, and his movement grow, so, too, do the threats emanating from them.

Tensions reached a boiling point last week when the former president Luiz Ignácio Lula da Silva was released from prison after Brazil’s supreme court ruled that the constitution bars imprisonment of defendants, such as Lula, before they have exhausted their appeals.

Lula is not only the obvious and most charismatic leader of the leftwing opposition to Bolsonaro but also the greatest prize of Bolsonaro’s minister of justice and public security, Sérgio Moro. It was Moro who found Lula guilty on dubious corruption charges in 2017 and ordered him imprisoned in 2018 at a time when all polls showed that Lula was the clear frontrunner to win the presidential election.

Bolsonaro says he’s fighting corruption. So why is he surrounded by scandal?

The sight of Lula walking out of prison was a powerful symbolic repudiation to Moro but also a clear threat to Bolsonaro’s efforts to consolidate the 2018 wave that ushered the far-right movement into power. Lula has strong emotional ties to the country’s poor and is singularly capable of moving them.

Lula’s release became a lightning rod for threats of repression. After the ex-president used his first speech to call for protests similar to those taking place in Chile, members of Bolsonaro’s party formally requested that he be “preventatively imprisoned” on the grounds that he was attempting to incite violence against the government.

But even before Lula’s release, the ways in which Brazilian democracy are imperiled were becoming more acute. In the past, each time the supreme court was set to rule on the possible release of Lula, more extremist members of the Brazilian military posted not-very-veiled threats on their social media accounts warning the court not to do so.

In a country where half the population – including all of the supreme court’s members – remember the brutal military regime that only ended in 1985, such warnings pack a heavy punch.

As the court was set to rule again this time, the same happened, and worse. Along with generals, leading members of the Bolsonaro movement – led by its US-based astrologer/“philosopher” guru Olavo de Carvalho – began openly advocating for a return of the dictatorship-era law AI-5 (Institutional Act Number 5).

The mere invocation of that bureaucratic-sounding phrase sends chills down the spine of many Brazilians. AI-5 was an infamous decree issued by the military regime in 1968 that empowered military dictators to close congress, ignore court orders and suspend constitutional rights in the name of order.

That decree is widely credited with laying the groundwork for the Brazilian dictatorship’s horrific torture of Brazilian dissidents. Bolsonaro and his sons have explicitly praised the regime’s most notorious torturers.

In fact, in an interview earlier this month, Eduardo Bolsonaro openly advocated reinstating AI-5. “If the left radicalizes to this extent [in Brazil] we will need to respond, and that response could come via a new AI-5,” said the president’s son.

After his statement was condemned across the political spectrum and by most mainstream institutions, Eduardo “clarified” that he was merely speaking hypothetically, and that such a measure would be warranted only if protests, disorder and violence of the kind taking place in Chile came to Brazil.

Small comfort, especially given that his remarks appeared to be a direct threat against leftwing protests.

Previous reporting had already linked the Bolsonaro family to the violent militia that is believed to have been behind the still-unsolved 2018 assassination of my party compatriot and close friend, the city councilwoman Marielle Franco.

But a report earlier this month by the nation’s largest and most influential media outlet, Globo TV, suggested that the Bolsonaro family may be linked to the assassination itself. Globo reported that hours before Marielle’s murder, the driver of the car that killed her, an ex-police officer, came to Bolsonaro’s gated condominium to meet with the ex-police officer who pulled the trigger. The doorman at the gate noted in his records, and then testified to the police, that the ex-police officer gained entrance by saying he was going to Bolsonaro’s house.

According to the Globo report, someone inside Bolsonaro’s house authorized Marielle’s alleged murderer to enter the gated community.

Perhaps as revealing as the Globo report was Bolsonaro’s reaction. When the report broke, Bolsonaro was in Saudi Arabia – meeting with, and showering praise on, Mohammed bin Salman, the Saudi autocrat accused of ordering the killing of Washington Post journalist Jamal Khashoggi.

In a rambling middle-of-the-night video, Bolsonaro responded to the Globo allegation with an extended rant against his enemies. Last week he announced he was cutting public funds to Globo, and the justice minister Moro announced that a criminal investigation not against Bolsonaro and his family but against the doorman who said that Marielle’s killers had gained access via Bolsonaro’s house.

Perhaps the most revealing incident of all was the widely reported physical assault on my husband, the journalist Glenn Greenwald, by the pro-Bolsonaro, far-right journalist Augusto Nunes.

Two months ago, Nunes said on a widely watched radio and YouTube program that a family court judge should investigate whether our two adopted sons are being cared for, on the grounds that I work as a congressman three days a week in the nation’s capital of Brasília while Glenn has been working for the last five months on a series of devastating exposés about corruption by Moro and the prosecutors who imprisoned Lula.

When Glenn appeared on the network where Nunes works and Nunes was added to the panel at the last minute, Glenn confronted him about his attacks on our family and called him a “coward”, which led to Nunes physically attacking him.

While Nunes’s violence was widely condemned in mainstream venues, the key figures of Bolsonaro’s circle cheered and called for more. Bolsonaro’s guru, Olavo, tweeted that it was “the most beautiful thing I’ve ever seen on Brazilian TV”. Two of Bolsonaro’s politician sons, along with members of congress, also applauded it, with some regretting that it was not more violent.

What all of these events reveal is the true goal of Bolsonaro and his movement: they want and crave violence and disorder because, as Eduardo said, it is what they will use to justify a restoration of the repressive measures of the military regime.

Don’t forget that Bolsonaro spent the last three decades in congress relegated to the fringes precisely because he openly praised the military dictatorship (in which he served as an army captain) as superior to Brazilian democracy. That view, once taboo, has been dragged into the mainstream by the Bolsonaro family’s open revisionism as well as the use of social media to convince millions of Brazilians that the dictatorship was not shameful but noble.

Bolsonaro and his movement know they cannot end Brazilian democracy without pretexts. They need disorder, protests and violence to justify a restoration of dictatorship-era measures, which will no doubt be depicted as necessary to restore order – the same rhetorical framework used to justify the military coup in 1964. And they are determined to bring about exactly that to our once-stable country.

Sorgente: Bolsonaro wants to end democracy in Brazil. Here’s one way he could do it | David Miranda | Opinion | The Guardian