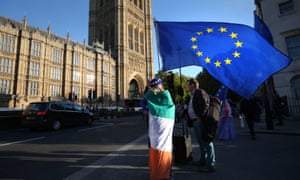 Rolling coverage of the day’s political developments as they happen, including Boris Johnson’s statement to MPs about his Brexit plan for a replacement to the backstop

Almost 4 million women born in the 1950s are not entitled to restitution for money they lost out on when the pension age was raised from 60 to 66, the high court has decided. My colleague Amelia Hill has the full details here.

Irish junior minister Patrick O’Donovan tells RTE the UK proposal is it not the basis of a deal, but is ‘certainly the basis for further discussions’ adding ‘there are some things that we would welcome, but some things we would have issue with.’

Cabinet done and dusted in 50 minutes this morning. Told there was no dissent. Boris Johnson stressed that he was going to adopt a tone of ‘glutinous emollience’ to both the EU and Labour MPs over the next few days

This is what Ireland’s two leading upmarket papers are saying about Boris Johnson’s plan for an alternative to the backstop this morning.

The Irish Times in its editorial says what Johnson proposed yesterday was “not the basis for a workable plan”.

The latest UK proposals on Brexit reflect either an extraordinary ignorance of Northern Ireland or a willingness to risk the Belfast agreement – and the progress of the last 20 years – to further the Johnson government’s political interests.

The need to minimise the inevitable problems caused by a customs border on the island of Ireland is presented as a technical issue when, of course, it is so much more. The contortions necessary to keep the Democratic Unionist party on side have created proposals which would be disastrous for the North’s economy and bring with it wider dangers to peace …

While claiming to support the Belfast agreement, the Johnson government is showing a wilful disregard for it and for the commitments the UK made in negotiations with the EU in December 2017. The most credible conclusion is that the prime minister and those around him have anticipated that this offer will be rejected and their primary objective in framing it in such a manner is their own domestic political advantage.

And the Irish Independent in its editorial says a Brexit delay is now necessary, because this plan is not satisfactory.

Mr Johnson has argued the backstop is “a bridge to nowhere”. Alas, the slight proposals set down yesterday look like a flimsy pontoon that could be washed away in the first tides of trouble.

They require stronger foundations to either protect the legacy of the Good Friday agreement, or seal the single market. They are more an outline than a detailed plan …

Commitments cannot be exchanged for vague possibilities. The Brexiteers fear the UK could be trapped indefinitely in limbo, but they have no problem inviting the same plight on the North. Rejection of the latest Brexit plan may lead to the no deal Mr Johnson warned of.

But acceptance could have the same negative outcomes. The British prime minister claims his plan is reasonable. But the risks appear weighed too heavily on one side.

Stephen Barclay, the Brexit secretary, was giving interviews this morning defending Boris Johnson’s plan for an alternative to the backstop. Barclay said that he had spoken to Michel Barnier, the EU’s chief Brexit negotatior, about the offer and that the EU were treating these as a “serious set of proposals”.

Sir Bernard Jenkin, one of the 28 Tory Brexiter “Spartans” who voted against Theresa May’s deal three times, sounded as if he could be persuaded to vote for Boris Johnson’s plan when he was interviewed on the Today programme this morning. He said he had an “open mind”, but that he and his Brexiter colleagues were looking at what was proposed “very realistically”. He said:

I am quite optimistic that, if the EU were to agree these backstop proposals, it sounds like the DUP would support them and that would change the whole chemistry of the way the Conservative party thinks about this …

We may have to accept a compromise and I think compromise is in the air. The question is whether the EU can compromise.