How did oil attack breach Saudi defences and what will happen next? | World news | The Guardian 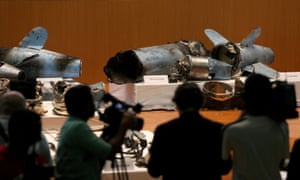 Escalation is dangerous because infrastructure could be exposed to retaliation

Saudi Arabia’s state-of-the-art missile defence systems could do nothing to stop the swarm of drones and cruise missiles that struck some of its most important oil infrastructure at the weekend. They were designed to deal with different threats – and they were looking in the wrong direction.

The audacious strike against the Abqaiq petroleum processing facilities and Khurais oil field on Saturday morning – which the Saudis say was “unquestionably sponsored by Iran” – has exposed the limits of the defences of the world’s largest military spender per capita. 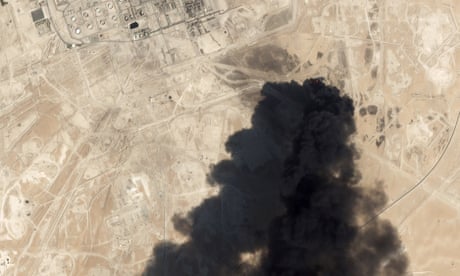 Everything you need to know about the Saudi Arabia oil attacks

The kingdom’s ability to ward off any future attacks is also constrained, analysts said, and depends heavily on Donald Trump’s willingness to make a deal with Iran.

Like other conventional armies across the region, Saudi Arabia’s armed forces are scrambling to protect against the rise of cheap, low-tech threats such as drones. The kingdom has spent billions in recent years on US-made Patriot surface-to-air missiles designed to shoot down high-flying targets such as enemy jets or ballistic missiles. Satellite imagery suggests at least one was installed at Abqaiq in the recent past.

But drones and cruise missiles fly too low to be detected by the Patriot’s ground-based radar. “They aren’t threats these systems are designed to cover,” said Omar Lamrani, from the strategic analysis firm Stratfor.

Even if they could see the threats, experts said, Saudi Arabia’s missile-defence systems – with a field of vision of about 120 degrees – would likely have been pointed across the Gulf towards Iran and south towards Yemen, but at least some of the missiles and drones are believed to have struck from the west.

The missile debris the Saudis displayed at a press conference on Wednesday evening appeared to be that of an Iranian Quds-1 missile, with a range of less than 1000km, and possibly as little as 500km, said Michael Elleman, from the International Institute for Strategic Studies. “Thus, it seems more probable that they were launched from either Iraq or Iran territory, but certainly not Yemen,” he said.

At least four shorter-range defence systems, designed to take out smaller targets, were also present around Abqaiq, according to satellite images. But they were either positioned at the wrong end of the facility or would have seen the tiny drones and missiles too late to shoot them down, said Michael Duitsman, a research associate at the Monterey-based Centre for Nonproliferation Studies.

“This attack was something new, it was not something the Saudis were expecting to happen,” said Lamrani.

The US shares intelligence with Saudi Arabia, but that also has its own limitations, according to the chairman of the joint chiefs of staff, Gen Joseph Dunford. “We don’t have an unblinking eye over the entire Middle East at all times,” he told reporters on Wednesday.

The Saudi reaction was also hampered by the organisation of its own forces, said Becca Wasser, a policy analyst at the Rand Corporation. Most US defence sales have gone to the Saudi military, but the country’s oil infrastructure falls under the responsibility of the interior ministry, which has traditionally focused on domestic threats. Meanwhile, separate air defences are operated by the National Guard.

Other crucial Saudi infrastructure such as the plants which cleanse Saudi drinking water, and the long pipelines that carry them to major cities, also now look vulnerable. “All these installations are very large and above ground,” said Eckart Woertz, a senior research fellow at the Barcelona Centre for International Affairs.

“This attack was about Iran demonstrating that it has the means and will to execute exquisitely precise attacks on the most vital oil infrastructure in the world by far,” said Robert McNally, a former national security adviser to George W Bush, and now president of the Rapidan Energy Group. “And they can come back next Tuesday or a week from Friday – they can do this again.”

In its response, Riyadh will seek to avoid anything that might trigger a wider conflict, analysts said – especially if it cannot rely on American support. “Saudi Arabia’s air force has some capabilities but is very much reliant on the US for ammunition, refuelling and reconnaissance,” said Woertz.

“In terms of boots on the ground, their capabilities are more limited. They don’t have many soldiers within Yemen, they rely on mercenaries.”

Trump has made it clear in recent days that he is averse to following Saudi Arabia into a full-blown confrontation. “The president has made it clear he is not looking to go to war,” Dunford said in London on Tuesday. “What we saw was an unacceptable act of aggression [and] here are a number of ways to deal with that.”

Complicating the situation for Riyadh is that it has no way to de-escalate the standoff itself. Iran’s demand is that crippling sanctions on its exports be lifted – something only the United States can grant.

“But the escalation path is also very dangerous for Saudi Arabia because it exposes their energy infrastructure to retaliatory strikes by Iran,” said Lamrani. 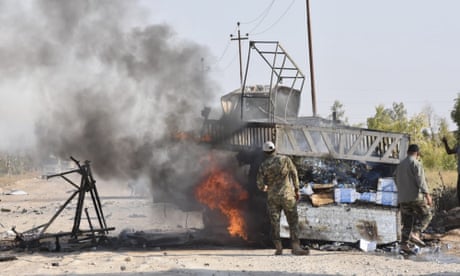 The attack has put a diplomatic breakthrough between the US and Iran out of reach in the short term. More likely, said analysts, was a limited military response, delicately calibrated to deter Iran from raising the bar again without sparking an all-out conflict.

“A proportional, limited response would look like the Saudi armed forces, or the US armed forces, or both, firing a volley of cruise missiles … against the facilities or the territory where these attacks originated,” said McNally.

“It would be a symbolic strike that is directly proportional,” said Lamrani. “You struck our most important oil facility, and so we’re striking yours, and then we’re backing down.”

Sorgente: How did oil attack breach Saudi defences and what will happen next? | World news | The Guardian