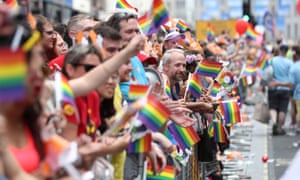 30,000 people to take part in march that critics say has become too commercialised

The organisers of Pride in London have claimed Saturday’s event will be the most sustainable and diverse in its 47-year history, despite criticism from some campaigners that it has become too regimented and commercialised.

Peter Tatchell, one of the organisers of the UK’s first Pride parade in 1972, criticised local authority-imposed limits on marcher numbers. “In the 1990s over 100,000 marched, and similar numbers would probably march today if the parade was not restricted,” he said. “Pride has become so bureaucratic and regimented. LGBT+ individuals cannot join the parade, only organisations.”

He also voiced concerns that the onerous costs for road closures, barricades and parking suspensions imposed on Pride had forced it to rely heavily on corporate sponsorship. There was a danger of “pinkwashing”, he said. “Some corporates seem to see Pride as a marketing opportunity to target LGBT+ customers.”

Why culture’s ‘queerbaiting’ leaves me cold

Organisers said pure marketing was not allowed on the parade, and the LGBT+ policies of all participating brands had been carefully examined.

Activists have put up pro-refugee and anti-homelessness slogans on some of the capital’s buses in protest at what they say is the commercialisation of Pride in London.

The campaign group Lesbians and Gays Support the Migrants replaced bus advertisements with political messages along the Pride route. The “alternative ads” question why the Home Office, the Metropolitan police and global corporations are able to participate in this year’s Pride while “marginalised groups are left watching on the sidelines because they are unable to afford spaces on the march”.

Sam Bjorn, a spokesperson for the group, said: “You have to ask what London Pride is really for? While the Home Office are celebrated, the LGBT+ migrants that they have dehumanised, detained and forced to live in fear of deportation have to watch from the sidelines.”

Bjorn pointed out that on the day in June when the Home Office changed its social media profile to the rainbow colours it emerged that a gay rugby player was being deported from the UK. He said 78% of asylum cases where the applicants were from the LGBT+ community were turned down.

Hate crime against LGBT+ people has grown by 27% to 11,638 incidents in the year to March 2018, and there have been protests in Birmingham over the introduction of compulsory education for primary pupils on LGBT-inclusive relationships.

Organisers hope Pride will focus minds “in terms of people realising that the fight for equality is not yet won, and that even when things are enshrined in law, that you cannot sit back and take it for granted”, according to its co-chair Alison Camps.

“You cannot be complacent,” she said. “We do not have equal marriage in Northern Ireland. The scenes in Birmingham are extremely distressing for those of us who are old enough to remember when section 28 was enforced, when there was no such thing as inclusive education, and the impact that had on young lives and people being free to be who they were.

“So there is this sense we are at risk of going backwards. And Pride should be a time when we come together as a community to stand up for things that are right, and to fight for each other. That’s what I hope. I hope people have a good time. I want it to be joyful and I want it to be provocative.”

Organisers said enhanced security would be in place to prevent anti-transgender activists from hijacking the event, after disruption last year. “Our position is they are not welcome,” Camps said. “They do not speak for the LGBT+ community. They do not speak for Pride in London. And our effort now focuses on making sure that the trans community, as well as everybody else, feels very safe, included, loved and valued at Pride in London.”

The LGBT+ equality charity Stonewall, which boycotted last year’s paradeover claims the event was not diverse enough, is back to join 30,000 marchers from 594 groups. After constructive talks with organisers, Stonewall said it was proud to be marching in partnership with UK Black Pride, Mermaids, which supports gender diverse and transgender children and young people, and Level Up, a feminist organisation.

“We sat down with Stonewall and listened to their feedback, took it on board and showed them what we are doing,” said Camps. “We have beefed up our community engagement, and worked with community organisations to launch a new world area celebrating the BAME LGBT+ community.” 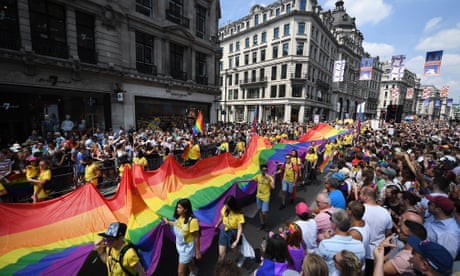 This year’s theme is Pride Jubilee, marking the 50th anniversary of the Stonewall riots – generally regarded as the birth of the Pride movement – as well as the 30th birthdays of both the Stonewall charity in the UK and the Albert Kennedy Trust, which helps homeless LGBT+ young people.

Billy Porter, a star of the Broadway musical Kinky Boots, will headline the Trafalgar Square stage, appearing with performers including the Eurovision and X Factor singer Saara Aalto and stars from TV series RuPaul’s Drag Race. Artists appearing on the women’s stage in Leicester Square include Toya Delazy, Heather Peace and Four of Diamonds.

The 30,000-strong parade will begin at midday at Portland Place and move through Oxford Circus, Regent Street, Piccadilly Circus, Lower Regent Street, Pall Mall and Trafalgar Square before finishing on Whitehall at about 5.30pm.

The number of official marchers is up from 25,000 last year. Organisers said they had cut the number of wristbands given to corporate bodies to enable the inclusion of more community groups.