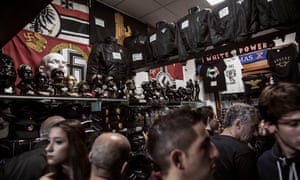 Thousands of curious visitors – and fascists – descend on the Apennine town

Dressed in black T-shirts, their arms inked with tattoos, Fabrizio and Mameli Gamberini are on their yearly homage trip to Predappio, the birth town and burial place of Benito Mussolini.

“We’re fascists,” Mameli proudly admits as she leaves Predappio Tricolore, a souvenir shop teeming with Mussolini memorabilia, on Friday morning. “We come every year at the end of July to buy a few new keepsakes, visit his tomb and leave some flowers in his honour.”

The couple, from Varese, are in Predappio, a town nestled among the hills of the Appenines in the Emilia-Romagna region, to celebrate the 136th anniversary of the Italian dictator’s birth on 29 July.

It is one of three occasions over the past two years, including the anniversary of his death on 28 April and the march on Rome on 28 October, that the Mussolini family crypt has been opened to the public since it was closed for restoration works in 2017.

The anniversaries have always attracted thousands of fascist pilgrims from across Italy and beyond, who join a parade that leads to the tiny San Cassiano cemetery, where they pay tribute to Il Duce (The Leader) with a fascist salute, leaving messages of admiration in the guest book. A card attached to a bunch of flowers left recently said: “Thank you, Duce”.

The Gamberinis are now thrilled to learn that they might again be able to pay their respects on any day of the year after the town’s recently elected rightwing mayor, Roberto Canali, last week announced controversial plans to reopen the crypt all year round as a way to boost tourism.

Most residents in this town of about 6,000 accept the influx of fascists on the anniversaries as a necessary evil as they are the most fruitful days of the year for shops, bars and hotels, hence the reason why there has been little criticism locally of Canali’s plans.

In fact his pledge, which has been supported by Mussolini’s granddaughters, Rachele and Alessandra, was an election campaign winner.

“After the tomb was closed, so many businesses complained about the loss of custom,” Canali told the Observer. “Apart from those three intense days a year, we get a continuous flow of people who, dressed normally, come out of curiosity or to understand history, but who are disappointed to find the tomb closed.”

Claudia Brunazzi, a representative from the local business association, Albero Rosso, said: “It’s a pity that Predappio is only remembered for this, as there is so much more – the wine, food, scenery – but … opening the tomb is useful for business.”

Needless to say, Canali’s plans triggered a sharp rebuke from Italy’s anti-fascist association, ANPI, which is planning to protest on Sunday (the day the crypt will be open).

“This muddies the memories of the many victims of fascist crime, its racial laws and collaboration with the Nazis that led to the massacre of innocent women, men and children,” the association said in a statement.

Luca Capacci, a spokesperson for Possibile, a small leftwing party, said: “It’s very sad and worrying that the opening of the tomb is seen as an attractive element in a territory that has much more to offer. It’s not a historic monument like the Colosseum … the people who go there do so to celebrate a dictator.”

It is unclear when the tomb, whose opening to the public is at the behest of the Mussolini family, would be opened permanently, as town leaders still need to work out who will foot the €30,000-a-year bill for it to be guarded and maintained – the town or the family. One of the reasons it hasn’t been reopened since restoration works was because the previous custodian, a devout Mussolini fan, did the job for free for years.

Nostalgic factions of the Italian population have long helped keep the spirit of Mussolini alive, but thriving rightwing populism has been further dismantling the taboo. Matteo Salvini, deputy prime minister and leader of the far-right League, sometimes quotes Mussolini, and during a European election campaign rally in Forlì, close to Predappio, he addressed a crowd from the same balcony where the dictator watched his opponents being killed.

Mussolini and his mistress, Clara Petacci, were shot dead by partisans in the final days of the second world war before their bodies were strung up at a filling station in a Milan square. His remains were brought to Predappio in 1957.

One of the reasons his spirit lingers is because some Italians consider him to be the country’s last “strongman” leader, who not only restored law and order but who built better housing, roads, transport systems and schools, while also investing in industry and introducing a welfare system.

People such as the Gamberinis still struggle to square up to his misdeeds. “It’s thanks to Mussolini that we have pensions,” said Mameli. “His main mistake was siding with Hitler – and he paid for it.”

Canali is unable to provide official data on how many people visit Predappio, which was rebuilt on Mussolini’s orders in the 1920s, each year; past estimates suggest 100,000. But without doubt, the town also pulls in a steady flow of people who come simply out of curiosity.

Last October a week-long history tour of Italy, called “Duce! The Rise and Fall of Italian Fascism” and organised by a British firm, Historical Trips, sold out. Rachele Mussolini met the group on the Predappio leg of the trip to answer questions about her grandfather’s legacy.

Other than the cemetery, people can wander around the house in which he was born.

“It’s incredible that this place even exists,” said Pieter Floore, an archaeologist from the Netherlands who stopped in Predappio with his family on Friday morning as they made their way home from a holiday in the nearby Marche region.

“Every reminder of fascism in the Netherlands has been completely destroyed. [These reminders] should not be eradicated but explained, in a cautious way, what happened during the fascist period and the impact it still has on societies across Europe. Fascism will never return, but it can come back in a different form, with resonations of the past.”

The rightwing surge across Italy helped to end more than 70 years of leftwing rule in Predappio upon Canali’s election in late May. Canali ran on an independent civil list, but was strongly backed by the small far-right party, Brothers of Italy, to which Rachele belongs.

Unable to stop people coming to the town, whether out of intrigue or nostalgia, former mayor Giorgio Frassineti is still endeavouring to open a museum aimed at teaching people about Italy’s dark period, rather than glorifying it. Frassineti also fought to close the souvenir shops selling fascist paraphernalia during his time as mayor. Up until a few years ago the town had three or four shops. Only Predappio Tricolore, which sells everything from black shirts and fez hats to Mussolini busts, mugs, calendars and even baby clothes featuring one of his famous quotes – “who dares wins” – remains open today.

The owner, Pierluigi Pompiglioni, was in a jovial mood as he poured red wine from a bottle emblazoned with Mussolini’s image for the keen customers who dropped by on Friday. Locals joke that Pompiglioni is Predappio’s richest man, having enjoyed a brisk trade for years.

“But for the last couple, due to the tomb being closed, business has been bad,” he complained. He doesn’t see anything wrong in selling merchandise that celebrates fascism. “Fascism is dead, Mussolini is dead – those who buy these things are just rightwing people who want political change.”

Others beg to differ.

“If we think fascism is only about wearing a black T-shirt or a fez, we are very much mistaken,” said Capacci. “Mussolini may be dead but the ideology he created is not completely dead, as is demonstrated every day in the news and politics, not only in Italy.”

Sorgente: Mussolini’s birthplace cashes in on the surge of far-right tourism | World news | The Guardian