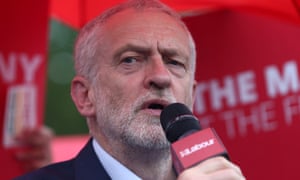 Jeremy Corbyn has called for a “speedy and thorough” independent investigation into reported claims by senior civil servants that he is “too frail” to be prime minister.

The Labour leader, in a letter to the cabinet secretary, Mark Sedwill, said the matter had “undermined confidence in the principle of civil service neutrality” as he called for an inquiry.

The Times reported at the weekend that it had been told by two senior civil servants that Corbyn, 70, may have to stand down due to health issues. The report drew a furious response from Labour, which denounced the comments as a “scurrilous” attempt to undermine the party’s efforts to gain power.

Sedwill wrote to Corbyn on Monday night expressing his concern at the articles and promised to investigate the matter, Labour said. His letter has not been published. The Cabinet Office confirmed it was examining the circumstances.

In his reply, Corbyn thanked Sedwill for his “assurances” that he was “concerned by the articles”.

“As Jon Trickett, the shadow minister for the Cabinet Office, laid out in his letter at the weekend, such discussions, based on false assumptions, should not be taking place, nor shared with a newspaper,” he wrote.

“This matter has inevitably undermined confidence in the principle of civil service neutrality, which is integral to the healthy functioning of our democracy. This was made clear by Jon Trickett today in parliament and endorsed by the speaker of the House of Commons.

“For there to be trust in any investigation, there need to be assurances on its scope and independence. In the light of this, I would urge you to ensure that there is a speedy and thorough independent investigation, rather than one carried out by the Cabinet Office.”

In the Commons on Monday, Trickett said Corbyn’s fitness was “legendary” before criticising the “undemocratic and unconstitutional intervention” attributed to senior civil servants in the Times.

Downing Street condemned the reported claims, with the prime minister’s official spokesman saying: “Impartiality is one of the fundamental values of the civil service and underpins its ability to effectively serve the government of the day.

“It would clearly be inappropriate and unacceptable for comments of this sort to have been made or briefed to the press. The cabinet secretary will be writing to the leader of the opposition shortly.”