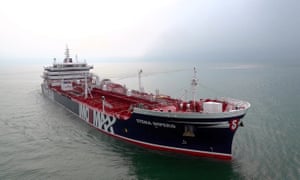 Iran seized two oil tankers – one registered in the UK, the other in Liberia – in the strait of Hormuz on Friday, marking a dramatic escalation in the worsening standoff in the Gulf.

Iran’s Revolutionary Guard claimed to have taken the British-flagged Stena Impero into port with its 23-strong crew, and Iranian officials claimed it had infringed maritime regulations.

On Saturday, the semi-official Iranian news agency, Fars, said the ship had been taken to Bandar Abbas port and that the crew remained on the vessel. Meanwhile, Iran’s state-run news agency, IRNA, reported that the tanker was seized due to a collision with an Iranian fishing boat. It said the fishing boat informed Iran’s Ports and Maritime Organisation, which notified the Revolutionary Guard.

The Stena Impero’s owners however, said the ship had been “approached by unidentified small crafts and a helicopter during transit of the strait of Hormuz while the vessel was in international waters”.

A second tanker, the Mesdar, which is Liberian-flagged but British operated, also made a sudden diversion from its course towards the Saudi port of Ras Tanura on Friday, and tracking data showed it moving northwards towards the Iranian coast before apparently turning off its tracking signal.

Less than two hours later, the Mesdar’s tracking signal was turned back on. Fars, the semi-official Iranian news agency, reported that it was briefly detained in the strait of Hormuz and given a notice to comply with environmental regulations before being allowed to continue on its way.

The Mesdar’s Glasgow-based operator, Norbulk Shipping UK, confirmed that the vessel had been boarded by armed guards but had then been allowed to continue its voyage. “All crew are safe and well,” it said.

Stena Bulk and Northern Marine Management confirmed in a statement on Friday that the ship remained uncontactable.

Stena Impero was in “full compliance with all navigation and international regulations” when it was intercepted, the company said.

Stena Bulk chief executive Erik Hanell said: “There are 23 seafarers onboard of Indian, Russian, Latvian and Filipino nationality. There have been no reported injuries and the safety and welfare of our crew remains our primary focus.”

Jeremy Hunt, the UK foreign secretary, told Sky News: “We are absolutely clear that, if this situation is not resolved quickly, there will be serious consequences.”

But he added: “We are not looking at military options, we are looking at a diplomatic way to resolve the situation but we are very clear that it must be resolved.”

He said that Stena Impero had been surrounded by four Iranian vessels with a helicopter hovering overhead, while 10 Iranian speedboats had converged on the Mesdar.

“These seizures are unacceptable. It is essential that freedom of navigation is maintained and that all ships can move safely and freely in the region,” Hunt said.

Late on Friday night, the British government advised UK ships to stay out of the area “for an interim period”.

“We remain deeply concerned about Iran’s unacceptable actions which represent a clear challenge to international freedom of navigation,” a government statement said following a meeting of ministers to discuss the incident in the strait of Hormuz.

“As the foreign secretary has said, our response will be considered and robust and there will be serious consequences if the situation is not resolved.

“We remain in close contact with our international partners and there will be further meetings over the weekend.”

Donald Trump, the US president, said on Friday night that the US would talk to Britain about the incidents.

The Revolutionary Guards said they had seized the Stena Impero, citing international maritime law for their actions. Iran Front Page quoted an unnamed military source as saying the tanker had been “crossing a route other than the shipping lane in the strait of Hormuz, had switched off its transponders and did not pay any attention to Iran’s warnings when it was seized by the [Revolutionary Guard] forces”.

The seizure of the tankers came hours after authorities in Gibraltar announced that they were extending their custody of the Iranian tanker, seized by Royal Marines on 4 July, on suspicion of shipping oil to Syria, in violation of an EU embargo. Tehran has denounced the detention of the Grace 1 as piracy carried out on orders from Washington.

Iranian politicians have been calling for reprisals and the country’s forces, led by the Revolutionary Guards, are being increasingly aggressive in disrupting shipping lanes in the Gulf.

The Stena Impero, a 30,000-tonne British-flagged and Swedish-owned ship, was heading for Saudi Arabia when it abruptly left international sea lanes, and tracking data showed it heading north towards the Iranian island of Qeshm, where the Iran’s Revolutionary Guard has a substantial base.

Iran’s Revolutionary Guard previously attempted to capture a British tanker six days after the Grace 1 was seized. On 10 July, a British warship, the HMS Montrose, intervened to drive off three Iranian military vessels that were attempting to divert a UK tanker, the British Heritage, towards Iranian territory.

The incidents come amid a battle of nerves along the oil export routes of the Gulf, which has involved close encounters between Iranian, UK and US military forces.

Earlier on Friday, Tehran denied Trump’s claim that US forces had downed a Iranian drone over the Gulf. Iran’s top military spokesman said all drones had returned safely to base, but Trump was adamant. “No doubt about it … we shot it down,” the US president said.

Trump said on Thursday that the USS Boxer took defensive action after the unmanned vehicle came within 1,000 metres of the warship and ignored multiple calls to stand down.

The prospect of negotiations that might defuse the standoff appeared more distant than ever on Friday as a senior US official dismissed a nuclear offer proposed the previous day by Iran’s foreign minister, Javad Zarif, during a visit to New York. The official suggested the offer was not serious and called for “an actual decision-maker” to enter talks to “end Iran’s malign nuclear ambitions”.

Trump has vacillated on what he wants Iran to do in return for a lifting of the oil and banking embargo that the US has imposed since walking out of an international nuclear deal with Tehran (the Joint Comprehensive Plan of Action, or JCPOA) in May last year. The sharp response to Zarif’s offer suggests that administration hardliners, led by the national security adviser, John Bolton, are currently running Iran policy.

Zarif proposed that Iran’s parliament immediately ratify acceptance of a permanent regime of intrusive international inspections, known as the Additional Protocol, designed to ensure that Iran was not building nuclear weapons covertly. Iran is currently observing the protocol under the terms of the JCPOA, and was due to ratify it, cementing it into law, in October 2023.

Zarif offered to bring that arrangement forward by more than four years in return for immediate sanctions relief. The offer was never likely to be accepted – the US has an expansive list of demands concerning Iran’s activities – but it did signal a willingness to do a deal with Washington outside the framework of the JCPOA. The US reaction, however, was scathing.

“If Iran wants to make a serious gesture, it should start by ending uranium enrichment immediately and having an actual decision-maker attempt to negotiate a deal that includes a permanent end to Iran’s malign nuclear ambitions, including its development of nuclear-capable missiles,” a senior administration official said.

Iran has consistently refused to give up uranium enrichment, which can be for both civilian and military purposes. Efforts by previous US administrations to stop it led to an exponential expansion of Iran’s enrichment capacity. The JCPOA accepted Iran’s right to enrich uranium, but imposed strict upper limits on its purity and other elements of the nuclear programme in return for sanction relief.

With the negotiating gap between Washington and Tehran as wide as ever, the contest between the two countries has shifted increasingly to the Gulf.

The Gibraltar supreme court’s extended the detention of the Grace 1 at a hearing on Friday after Gibraltar’s chief minister, Fabian Picardo, held talks with Iranian officials at the Foreign Office. Picardo also held talks with Theresa May and Jeremy Hunt, the foreign secretary.

The UK has been seeking legal assurances that the tanker would not travel to Syria to unload 2.1m barrels of oil if released, as it was suspected of attempting when detained.

Tehran says it is not party to an EU embargo and insists that the ship was not bound for Syria.

Bob Sanguinetti, the chief executive of the UK Chamber of Shipping, said: “We condemn unreservedly the capture of Stena Impero … Our priority is for the safety and welfare of the crew. We call on the UK government to do whatever is necessary to ensure their safe and swift return.

“This incident represents an escalation. While we call for measured response, it is also clear that further protection for merchant vessels must be forthcoming to ensure enhanced security to guarantee free flow of trade in the region.”

Labour leader Jeremy Corbyn said: “Escalation risks a slide into an even deeper conflict. President Trump’s decision to tear up the Iran nuclear deal fuelled the risk of full-scale conflict. A negotiated reinstatement of the nuclear deal through the UN is essential to wind down tensions and defuse the threat of war in the Gulf.”

in archivio ci sono 199 articoli correlati
04-03-2021: Is it still possible to prevent the collapse of Syria? – Middle East Monitor