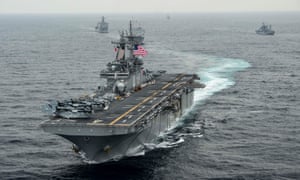 Iran has denied that a US warship brought down one of its drones in the strait of Hormuz, amid heightened tensions between the two countries.

The incident was first revealed by Donald Trump, who said that USS Boxer took defensive action after the drone came within 1,000 yards of the warship and ignored multiple calls to stand down. 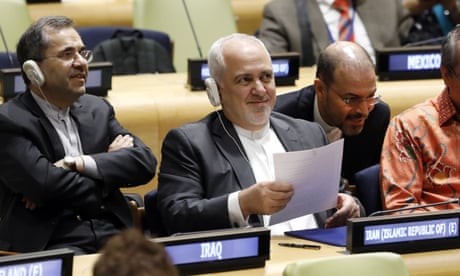 “The drone was immediately destroyed,” Trump said, adding that unmanned aircraft threatened the safety of the American ship and its crew, and called on other countries to condemn Iran and protect their own ships.

He said: “This is the latest of many provocative and hostile actions by Iran against vessels operating in international waters. The United States reserves the right to defend our personnel, facilities and interests, and calls upon all nations to condemn Iran’s attempts to disrupt freedom of navigation and global commerce.”

The deputy foreign minister, Abbas Araqchi, tweeted: “We have not lost any drone in the Strait of Hormuz nor anywhere else. I am worried that USS Boxer has shot down their own UAS [unmanned aerial system] by mistake!”

The semi-official Tasnim news agency quoted military spokesman General Abolfazl Shekari as saying on Friday that “all Iranian drones that are in the Persian Gulf and the Strait of Hormuz[…] have returned to their bases.”

The Pentagon said in a statement that the USS Boxer, an amphibious assault ship, had taken “defensive action” against a drone, but did not mention whether the aircraft was Iranian.

The chief Pentagon spokesman, Jonathan Hoffman, said in a written statement: “A fixed-wing unmanned aerial system approached Boxer and closed within a threatening range. The ship took defensive action against the UAS to ensure the safety of the ship and its crew.”

The statement also omitted any reference to how the drone was brought down, but CNN reported it was done by electronic jamming, rather than gunfire.

The Iranian foreign minister, Mohammad Javad Zarif, on a visit to the UN in New York, also denied losing any drones. He told reporters: “We have no information about losing a drone.”

Tensions in the Gulf region are high in the wake of Trump’s decision in May last year to pull out of a 2015 multilateral nuclear deal with Iran and impose an oil and banking embargo on Iran. There has been a sharp increase in incidents in the Gulf, exacerbating worries about the US and Iran stumbling into war.

Iran recently shot down a US drone that it said was flying over Iranian waters. Trump called off a planned retaliatory missile strike at the last minute. Zarif said the two countries had been “a few minutes away” from conflict.

He said: “I believe President Trump exercised prudence by not agreeing to the suggestions that were made to him to retaliate because in my view… he received information that no war with Iran would be a short war.”

Earlier on Thursday, Iran said its Revolutionary Guard had seized a foreign-owned vessel and its crew of 12 for allegedly smuggling oil out of the country, and hours later released video showing the vessel to be a United Arab Emirates-based ship that had vanished in Iranian waters over the weekend.

Zarif said the ship was relatively small and seized as part of routine policing against maritime smuggling.

Sorgente: Iran denies Donald Trump claim that US destroyed drone in strait of Hormuz | US news | The Guardian