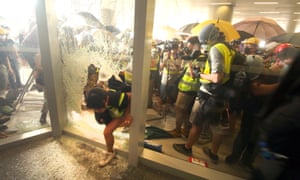 As Hong Kong woke up after a night of unprecedented drama, the city was divided on whether protesters who stormed and vandalised the city’s legislature had gone too far in their quest to make their voices heard. Anti-government and anti-police graffiti still adorned pillars and walls as police stood guard while legislators attempted to go about their day.

Two main narratives were emerging after the ransacking of the legislature: one that spoke of hopelessness in the face of semi-authoritarian rule, and another that condemned the destruction of property.

Pro-democracy figures placed the blame squarely on the shoulders of leader Carrie Lam, saying a government that only listens to a pro-Beijing party had driven young people to desperation.

“The protesters who broke into the Legislative Council complex were not rioters. They were not violent,” said activist Joshua Wong, jailed for two months after the 2014 umbrella protests. “They wanted to make the regime hear Hong Kongers’ voice, and they had no other option.

But pro-establishment figures focused on condemning the violence done to property and lamenting a loss of law and order. Protesters who vandalised the legislature could face up to 10 years in prison should the government chose to prosecute them under rioting charges.

“What we saw last night was shocking violence, unprecedented violence and damage to the Legislative Council. No slogan, no demand can justify such violence,” said Regina Ip, chair of the pro-Beijing New People’s party. “Totally unacceptable for a civilised society like Hong Kong.”

Some Hong Kong residents questioned why police had apparently stood aside as protesters moved on the legislature, allowing them to break through the windows and inflict extensive damage inside the building.

“The strangest thing was, police were there all along in the morning, confronting the protesters and standing guard inside Legco. Suddenly they all disappeared late afternoon, leaving an empty Legco wide open for the protesters to enter. Empty fort strategy much?” wrote the outspoken democracy activist Denise Ho on Twitter.

In a later tweet, she added: “The reason why the protesters have resorted to storming into the Legco, is because of this authoritarian government WHO DOES NOT LISTEN.”

For the past month, protesters have been demanding the withdrawal of a bill that would allow extraditions to the Chinese mainland as anger has grown against Hong Kong authorities and morphed into a wider political crisis.

Tuesday night’s occupation of the legislature coincided with a massive peaceful protest in which more than half a million people marched through the cityon the anniversary of Hong Kong’s 1997 return to Chinese rule.

It remained unclear if public opinion had shifted after the violence at the legislature, but Wong told the Guardian he had “faith and belief in Hong Kongers that they will understand why the protesters did what they did”.

Such opinions were reflected on the city’s streets on Tuesday.

“Breaking all those things, that was wrong,” said an 80-year-old retiree who gave his name as Mr Zhang, who watched the drama unfold on television. But he added: “The government – they’re not listening.”

A 49-year-old businessman, who gave his name as Mr Lai, said he believed the vandalism was understandable – and echoed the suggestion that the police had purposely allowed the protesters to enter the legislature. “[The protesters] just broke the window, it’s not violent at all. You can’t be violent to an object. They set them up.”

His wife, Karen Lai, 48, a financial services worker, added: “In general the older generation are more pro-Beijing. They don’t understand what the younger generation is fighting for, all they see is disruption, and they can’t see past that.”

Frederick Chan, a 31-year-old graduate student who had attended the 16 June 2 Million Person March, said he was “furious” the Hong Kong government had not listened to its demands.

“Most people don’t love to see violence, and we much regret it, but 2 million people should be quite extraordinary.”

The rallies reflect fears that China is stamping down on the city’s freedoms and culture with the help of the finance hub’s pro-Beijing leaders.

Although returned to Chinese rule in 1997, Hong Kong is still administered separately under an arrangement known as “one country, two systems”. The city enjoys rights and liberties unseen on the autocratic mainland, but many residents believe Beijing is reneging on that deal.

The city’s former no 2 official Anson Chan called for the government to address the deeper issues at hand.

“Violence does not solve anything, but I think the chief executive and the governing team should ask themselves what has led to this degree of violence?” said Chan to reporters.

Chan was the chief secretary under the city’s last British governor, Chris Patten, and was the public face of the treaty that ceded Hong Kong back to Chinese rule.

“Hong Kong youngsters particularly following the 79-day siege umbrella movement and achieving absolutely nothing, [are] feeling an increasing sense of anger, futility and frustration – the government needs to address this.”

Lawmaker Michael Tien – one of the few pro-establishment figures to express concerns over the extradition bill, told reporters that the protests demonstrated the need for political reform.
Calls for engagement with the protesters are spreading, including from members of the the legal and business community.

The Law Society of Hong Kong deplored the “serious criminal damage” inflicted on Tuesday night, but called on the government and public to “respect others, work together, restore trust and confidence and move forward”.

They also appeared to question police inaction, adding: “The police should take appropriate action to prevent criminal violence, secure observance of the law and uphold order for the protection of life and property.”