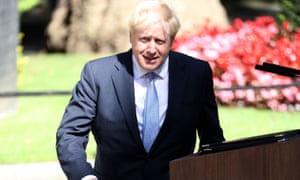 Boris Johnson’s elevation to prime minister has been greeted with mixed reaction internationally; while the praise has been enthusiastic from some quarters, including Donald Trump and far-right world leaders, it has been less than overwhelming from some of his European counterparts.

After Trump had offered his hearty congratulations , newspapers in the US were far less effusive.

The Washington Post said Johnson was “known for improvisation, inattention to detail and frequent false statements”. While it noted the similarities between Trump and Johnson, it said the new British PM had “mostly avoided Mr Trump’s hateful appeals to racism and ugly disparagement of opponents” offering an “upbeat vision”.

The New York Times editorial said “Johnson is about to collide with reality”, who has thrived on theatrics. Wednesday’s front page described him as an “agitator with an ally in Trump” and said he faces “Brexit strife and Iran unease”.

It’s editorial said while Johnson was a “master of political theatre … his record as journalist, legislator, London mayor and foreign secretary displays far more bluster than achievement, and a disdain for hard work, probity or the truth”.

In Brazil, the country’s authoritarian far-right president, Jair Bolsonaro, joined in Trump’s praise, saying Johnson could “count on Brazil in the pursuit of free trade … and the defence of freedom and democracy”.

The response was diplomatically measured from EU leaders, with Ursula von der Leyen, the president-elect of the EU commission, said she was “looking forward to having a good working relationship with him” adding that they had “challenging times ahead of us”. At the same press conference, French president Emmanuel Macron said he was “looking forward to working with him very soon”.

The front page of the French newspaper Liberation on Tuesday ran the headline: “‘Bojo’ the fallout”, saying: “Three years after the vote on Brexit, the extravagant and disturbing Boris Johnson is at the doors of Downing Street.”

There was a similar note of disquiet on the front page of the Belgian paper De Morgen on Wednesday, which had the splash: “EU is not afraid of Johnson”. Belgium’s L’Echo paper reported: “100 days of ‘Bojo’ before a hard Brexit”.

Frans Timmermans, the EU commission vice-president accepted that Boris Johnson was “colourful” but said “the world’s politics is rife with colour people these days, so if you can’t deal with them there’s not much you can do.”

Italy’s Matteo Salvini, leader of the anti-immigration League and deputy prime minister joined in the far-right praise of Johnson: “The fact that on the left they are painting him as ‘more dangerous than the League’ makes me like him even more”.

Australia’s prime minister Scott Morrison congratulated Johnson on his new role and said he hopes to sign one of Britain’s first bilateral trade deals after Brexit. Morrison said Johnson “has a reputation for getting things done and making things happen”. Morrison told reporters that “this is a time of change for the United Kingdom” and Johnson “will bring a new opportunity … to resolve what had been some very difficult issues.”

The leader of the Australia’s far-right, anti-immigration party One Nation party, Pauline Hanson, tweeted that she was “absolutely thrilled” that Johnson had been made prime minister, adding: “Bring on Brexit!”

Turkey also responded warmly to Johnson’s victory, largely due to his Turkish heritage, with politicians and media proclaiming that the “Ottoman grandson” could strengthen ties between the two countries.

Johnson’s great-grandfather, Ali Kemal, was the Ottoman Empire’s last interior minister, and Johnson’s ancestry has been a source of pride for many Turks, leading some media to refer to him as “Boris the Turk”. Their support has remained undimmed, despite Johnson’s sometimes disparaging remarks about Turkey, including a crude limerick about President Tayyip Erdoganand demands in 2016 that Britain veto Turkey’s accession to the European Union.

Erdogan congratulated Johnson on Twitter, adding that ties between Turkey and the United Kingdom were set to improve.

There was a particularly icy response from Russian president, Vladimir Putin, who sent a strikingly muted letter to Johnson, saying: “It would be in the interests of our countries and peoples to develop relations in various spheres,” according to a statement from the Kremlin.

Ties between the two countries have been particularly strained since the novichok nerve agent poisonings in Salisbury in 2018 that targeted the double-agent Segei Skripal and his daughter, Yulia.

The Iranian foreign minister issued congratulations to Johnson in a tweet that also carried a warning about the current standoff over the seizure of oil tankers in the Gulf.