The toddler’s arm was still draped around her father’s neck after bodies were found in the Rio Grande as they sought asylum Warning: contains graphic images

The grim reality of the migration crisis unfolding on America’s southern border has been captured in a series of images showing the lifeless bodies of a Salvadoran father and his daughter who drowned as they attempted to cross the Rio Grande into Texas.

The photographs, taken on Monday, show Óscar Alberto Martínez Ramírez, 26, and his daughter Valeria, lying face down in shallow water. The 23-month-old toddler’s arm is draped around her father’s neck, suggesting that she was clinging to him in her final moments.

Mexican newspapers compared the photograph to the 2015 image of the 3 year old Syrian boy Alan Kurdi who drowned off the Greek island of Kos – although it remains to be seen if it will have the same impact on America’s fierce immigration debate.

Their bodies were discovered on the bank of the river near Matamoros, Mexico, across from Brownsville, Texas, just half a mile (1 kilometer) from an international bridge.

According to Julia Le Duc, a reporter for the newspaper La Jornada, Martínez Ramírez had been unable to present himself to US authorities and request asylum, and decided to swim across the river with his daughter.

He set her on the US bank of the river and started back for his wife, Vanessa Ávalos, but seeing him move away the girl threw herself into the waters. Martínez returned and was able to grab Valeria, but the current swept them both away. The account was based on remarks by Ávalos to police at the scene.

The image underlines the dangers which mostly Central American migrants face in their attempts to escape violence, corruption and poverty at home in the hopes of finding asylum in the United States.

Donald Trump has cracked down on migration, turning back asylum seekers from US ports of entry, and making them wait in Mexico while their claims are considered – a process which can take years.

Migrants have increasingly turned to more remote and dangerous routes across the southern frontier.

On Sunday, two babies, a toddler and a woman were found dead after succumbing to heat exhaustion in Anzalduas Park, which borders the river in the city of Mission.

Elsewhere three children and an adult from Honduras died in April after their raft capsized on the Rio Grande, and a six-year-old from India was found dead earlier this month in Arizona, where temperatures routinely soar well above 100F.

So far this year, dozens of people have died attempting to cross the Rio Grande,

Water levels on the river are at their highest levels in 20 years after record levels of snowmelt run-off, transforming the river into a raging torrent.

Claudia Hernández, a Mexican police officer in the town of Piedras Negras, told the Guardian: “The river is treacherous and the people who aren’t from here don’t know that. I grew up here along the Río Bravo river [Río Grande]. I wouldn’t even go into that water to bathe or swim. There are springs and whirlpools and when the current takes you it can pull you under.”

The US administration has drastically reduced the number of migrants who are allowed to request asylum, down from dozens per day previously to sometimes just a handful at some ports of entry.

Isabel Turcios, a Franciscan nun, the director of the Casa del Migrante shelter in Piedras Negras said that local activists warn migrants not to try their luck on the river.

“But the asylum wait list here is very long and people get desperate and cannot keep waiting. They just want to cross. So they go to the river and without any form of protection – no lifejacket, nothing to save them – they go into the river. They always tell me that if God wants them to make it then somehow they will make it.” 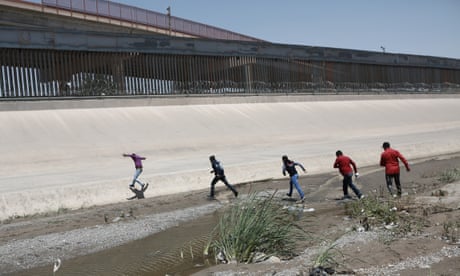 She added: “It’s not how things should be. They should be able to cross at the bridges. Every human being has the right to migrate. It’s a human right.”

Meanwhile Mexico has launched its own crackdown on migration as the government scrambles to ward off Trump’s threat of trade tariffs.

“Very regrettable that this would happen,” said President Andrés Manuel López Obrador on Tuesday in response to a question about the photograph. “As there is more rejection in the United States, there are people who lose their lives in the desert or crossing” the river.

According to reports in the local press, Martínez, Ávalos and their daughter left their home in the municipality of San Salvador in April and told their family they intended to seek asylum in Mexico.

But after two months waiting in the southern city of Tapachula – and fearful of the Mexican authorities – the family decided to push on.

“They said they were scared because of the way things were going for migrants, what with the pressure from Trump. That’s why they decided to cross the river. Their plan was to hand themselves into US migration,” Martínez’s sister Wendy told El Diario de Hoy.

One of Martínez’s cousins, Enrique Gómez, tweeted an appeal to the Salvadoran president, Nayib Bukele, pleading for help in repatriating the bodies. Gómez said the family sought assistance from the Salvadoran government but were being charged between $7,000 and $8,000 to repatriate the bodies. Bukele’s office responded by asking Gómez to send a private message and promised to start the repatriations.

The photograph of Martínez and his daughter provoked soul-searching among some Mexicans, even as new polling reveals that attitudes towards migrants have hardened in recent months.

“The image of a father and the little one in the Rio Bravo… is a painful symptom of our systematic failure,” tweeted author Alma Delia Murillo. “And on top of that you have idiots who blame the migrants because ‘they took the risk.’”

This report includes material from the Associated Press

Sorgente: Shocking photo of drowned migrant and daughter highlights peril on US border | US news | The Guardian