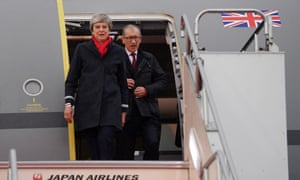 Theresa May will use a face-to-face meeting with Vladimir Putin on Friday to reiterate the UK’s determination to bring the suspects in the Salisbury poisoning to justice, she has insisted.

The announcement that the prime minister would hold a bilateral meeting with Putin at the G20 summit in Osaka sparked concerns that she was preparing to rekindle relations with Moscow, as one of the final acts of her premiership.

But speaking to journalists en route to the G20, May said it was not yet time for a thaw. “We would be open to a different relationship with Russia but if that is going to happen then Russia needs to stop its activity that undermines international treaties and undermines our collective security like what happened on the streets of Salisbury,” she said.

And she said she was determined to raise the poisoning of Sergei Skripal and his daughter Yulia on the streets of Salisbury last year – in an attack that later led to the death of Dawn Sturgess.

Two suspects, believed to be intelligence agents Anatoliy Chepiga and Alexander Mishkin, were filmed visiting the city, have been identified by the police.

“I’m going to make absolutely clear the position the UK takes in relation to what happened in Salisbury. We believe these individuals should be brought to justice,” May said, adding that the meeting would be an opportunity to make that argument “leader to leader”.

“It’s a longstanding position that Russia does not allow the extradition of its nationals. But there are European arrest warrants out for these individuals and if they step foot outside Russia then we will be making every effort to ensure that they are brought to justice.”

May arrives in Japan less than a month before she is due to leave 10 Downing Street, leaving Westminster gripped by the battle to succeed her.

The prime minister’s meeting with the Russian president also comes as he used an interview with the Financial Times to claim that the election of Donald Trump as US president and the rise of nationalist-populist movements in Europe signalled the death of liberal policiesin the west.

“[Liberals] cannot simply dictate anything to anyone just like they have been attempting to do over the recent decades,” he said. “The liberal idea has become obsolete. It has come into conflict with the interests of the overwhelming majority of the population.”

May has said she wants to discuss multilateral action on a series of fronts, including against climate change and terrorism, and on Iran.

But neither Putin nor the US president, Donald Trump, who will also be in attendance, are keen on what May likes to call the “rules-based global order”.

Moscow has remained defiant about the Salisbury attack. The suspects appeared on Russian TV shortly afterwards claiming they had visited the city because of its famous cathedral.

Dmitry Polyanskiy, Moscow’s first deputy permanent representative at the United Nations, even questioned whether the Skripals had been the victim of “a forced detention or even abduction”.

But a Kremlin spokesperson, announcing the meeting with the prime minister earlier this week, said: “The leaders will talk over sensitive questions – as you know there are many of them. If any kind of opportunity can be found in our relations with Britain to establish new cooperation, then we will only welcome that.”

The pair are also likely to discuss the escalating tensions in Iran. Putin’s deputy foreign minister warned earlier this week that if the US ramps up economic sanctions against Tehran, Moscow will try to help offset the impact on the Iranian economy.

May told reporters her priority was to try to “maintain” theJoint Comprehensive Plan of Action ( JCPOA ), the multilateral nuclear treaty negotiated with Iran in 2015, which Trump has sought to tear up.

“I think that what we need to see in relation to Iran at the moment is a de-escalation of the tensions that we have seen in that region and we will continue to work and I will continue to talk with my colleagues, France and Germany, about the importance of us acting to do everything we can to maintain the JCPOA,” she said.

She added that must also mean Iran abiding by its commitments. Tehran recently announced that it was about to breach the limits on stocks of enriched uranium imposed under the deal.

In a separate session in Osaka, May will raise her concerns about the availability of terrorist content on the internet, an issue she has highlighted repeatedly.

She will warn against violent extremists like the gunman who perpetrated the Christchurch shootings being able to “broadcast their atrocities in real-time”.

During a meeting on innovation, the digital economy and artificial intelligence, she will highlight a new crisis response mechanism developed by tech companies and supported by the UK and others.

It is aimed at establishing networks of “online first responders”, with close connections to government and the police.

“We should do all we can to bring the best minds together across industry to develop technology to tackle the misuse of live-streaming. We’ve seen the damage when terrorists can advertise into people’s homes – now we mustn’t let them broadcast their atrocities in real time,” May is expected to say.

Sorgente: May to press Putin over Novichok attack in face-to-face meeting | UK news | The Guardian