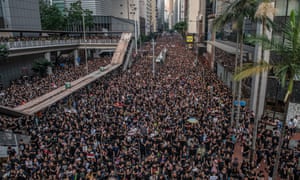 Hong Kong’s political crisis has entered its second week, after protesters who had filled the city’s streets in record numbers on Sunday rejected an apology from leader Carrie Lam, and vowed to continue their fight against a controversial law she championed.

After the sweeping protest – which organisers say attracted 2 million people, the largest in the semi-autonomous city’s history – Lam apologised in a statement for the way the government had handled the draft extradition law.

But she did not meet any of demonstrators’ key demands. They are calling for her to withdraw the extradition bill, end a crackdown on activists and hold police accountable for brutal tactics at previous protests. They also want her to resign.

On Monday Lu Kang, a spokesman for China’s foreign ministry, said Beijing would continue to support her.

For most of Monday morning a small group of protesters still blocked a key road outside government headquarters, but by midday they had retreated to a nearby park. Authorities said government offices would be closed for the day. 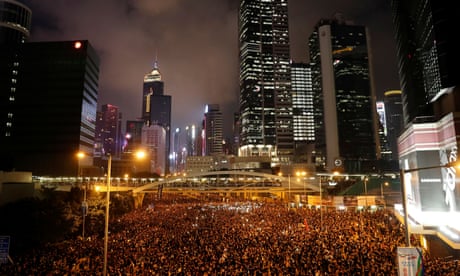 Strikes of students and workers also had been called by protest organisers for Monday, and although most of the city was working as usual, the opposition movement got fresh impetus with the release of prominent activist Joshua Wong, who had been jailed over his role leading pro-democracy movements in 2014.

He called on Lam to resign, soon after he walked free. “She is no longer qualified to be Hong Kong’s leader,” Wong told reporters. “She must take the blame and resign, be held accountable and step down.”

The crisis was sparked by Lam’s efforts to ram a much-criticised extradition bill through parliament. It would allow both residents and visitors to be sent to China for trial in opaque, communist controlled courts, which many in Hong Kong fear would prove a devastating blow to their economy and society.

The city functions as a regional business and trade hub, protected from China by its judicial “firewall”. Without that protection everyone from dissidents to business tycoons could be at risk; some of the city’s wealthy have reportedly already started moving assets abroad over fears about the new law’s impact.

Lam championed the bill and led efforts to rush it into law, but her authority has been badly damaged by the fallout.

“Her government cannot be an effective government, and will have much, much, much difficulties to carry on,” veteran Democratic Party legislator James To told government-funded broadcaster RTHK. “I believe the central people’s government [in China] will accept her resignation.”

Hong Kong’s most dramatic political crisis in years was set in motion a week ago, when about a million people turned out to protest against the law. Lam shrugged off the first demonstration, even though it was one of the largest the city has ever seen.

But on Wednesday, demonstrations spiralled into the worst political violence since the handover from British to Chinese rule in 1997, with police firing teargas and rubber bullets and attacking protesters. Later, there were arrests of activists, including in hospital.

With Sunday’s march already scheduled, and public anger heightened by police brutality and the detentions, Lam was eventually pushed into a dramatic reversal, suspending the controversial bill, reportedly after meeting top Chinese officials.

But the climbdownonly inflamed public anger. Many Hong Kongers said they were infuriated by Lam’s air of confident determination as she insisted the law was fundamentally sound, defended police violence and insisted her only mistakes were in communication.

“Suspending the law but not cancelling it is like holding a knife over someone’s head and saying, ‘I’m not going to kill you now’, but you could do it any time,” said Betty, an 18-year-old protester who just finished school. “We’re fighting for our freedom.”

Police, who historically give far lower estimates for political protests, said 338,000 people turned out at the demonstration’s “peak” on Sunday.

Hong Kong is not China yet, but that feared day is coming ever nearer

The US secretary of state, Mike Pompeo, said Donald Trump would raise the issue of Hong Kong human rights at a potential meeting with president Xi Jinping at the G20 summit in Japan this month.

Chinese censors have been working hard to erase or block news of the latest series of protests – the largest since crowds demonstrated against the bloody suppression of pro-democracy activists in and around Beijing’s Tiananmen Square in June 1989.

There has been little coverage of the demonstration in state owned media, with any reports focused on accusations of “foreign meddling”.

State-run tabloid Global Times tabloid in an editorial warned the United States against using Hong Kong as a “bargaining chip” in trade talks. “The riots in Hong Kong will only consolidate Beijing’s tough stance against Washington,” it said.