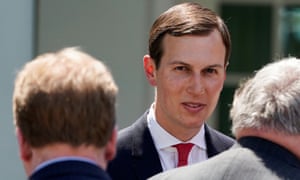 Company part-owned by Jared Kushner got $90m from unknown offshore investors since 2017Overseas investment flowed to Cadre while Trump’s son-in-law works as US envoy, raising conflict of interest questions

A real estate company part-owned by Jared Kushner has received $90m in foreign funding from an opaque offshore vehicle since he entered the White House as a senior adviser to his father-in-law Donald Trump.

Investment has flowed from overseas to the company, Cadre, while Kushner works as an international envoy for the US, according to corporate filings and interviews. The money came through a vehicle run by Goldman Sachs in the Cayman Islands, a tax haven that guarantees corporate secrecy.

Kushner, who is married to Trump’s elder daughter Ivanka, kept a stake in Cadre after joining the administration, while selling other assets. His holding is now valued at up to $50m, according to his financial disclosure documents.

Cadre’s foreign funding could create hidden conflicts of interest for Kushner as he performs his work for the US government, according to some ethics experts, who raised concerns over the lack of transparency around the investments.

“It will cause people to wonder whether he is being improperly influenced,” said Jessica Tillipman, a lecturer at George Washington University law school, who teaches government ethics and anti-corruption laws.

Kushner resigned from Cadre’s board and reduced his ownership stake to less than 25% after he joined the White House, according to his attorneys. He failed to list Cadre on his first ethics disclosure, later adding the company and saying the omission was inadvertent. Cadre says he is not actively involved in the company’s operations.

The names of the foreigners investing in Cadre via Goldman Sachs are not disclosed by the companies, which are not required to make the information public. Two sources familiar with the firm said much of the money came to the Cayman Islands vehicle from a second offshore tax haven, while some came from Saudi Arabia.

Kushner was initially denied a security clearance by career officials when he joined Trump’s administration. A whistleblower has told Congress it was blocked due to concerns about Kushner’s outside business interests and “foreign influence”. Kushner was later granted a clearance, allegedly after a Trump appointee intervened.

The White House and Abbe Lowell, an attorney for Kushner, did not respond to questions about the foreign investors and Kushner’s stake in Cadre.

Cadre was founded in 2014 by Kushner, his brother Joshua and their friend Ryan Williams, who previously worked for Goldman Sachs. The company operates from a building in Manhattan owned by the Kushner family’s real estate corporation.

The company styles itself as an online marketplace where investors can come together to buy property. But it has also built a real estate investment fund, now worth more than half a billion dollars, that is used to buy properties across the US. The fund’s value has risen fivefold since 2017, when Kushner was appointed a White House adviser, following earlier slower growth.

The offshore Goldman Sachs vehicle began collecting funds for Cadre in August 2017, according to a securities filing. The bank announced in January last year that it had struck a deal for clients to invest up to $250m in total with Cadre.

The vehicle is managed by accountants on the Cayman Islands and is owned by another offshore Goldman Sachs entity. The arrangement is legal. Offshore jurisdictions have come under increased scrutiny in recent years from international authorities concerned about their secrecy.

Funding from the Cayman Islands vehicle goes into Cadre’s real estate purchases in the US, according to sources familiar with the company’s work. Cadre charges an annual fee and takes a cut of profits made from the properties.

This funding is separate from ownership stakes in Cadre itself bought by venture capitalists in Silicon Valley and foreign billionaires, including the Chinese technology tycoon Jack Ma and the Russian investor Yuri Milner. Cadre last year held talks with a fund backed by money from the Saudi Arabian government, but no deal was done.

Trump and several members of his administration, including Kushner, have bucked precedent by retaining business interests after entering the government. George W Bush and Bill Clinton moved their wealth into “blind trusts”, while Barack Obama had few assets beyond savings accounts and investments in index funds.

Richard Painter, a former ethics lawyer in Bush’s administration who ran for the Democratic US Senate nomination in Minnesota last year, said he was troubled by the lack of disclosure around some of Cadre’s funding.

“The problem with Kushner – and with Trump – is that we have all these corporate entities, and often nobody knows who is invested in them and where those investors borrowed their money. We simply have no idea,” said Painter.

Government officials are barred by law from being involved “personally and substantially” in actions that benefit them financially, and are obliged to ensure they do not create an appearance of bias.

Kushner says he has excluded himself from government policy on real estate. A footnote to his financial disclosure form said he was recused from “particular matters in the broker-dealer, real estate, and online financial services sectors to the extent they would have a direct and predictable effect on Cadre”.

The conflict of interest law treats spouses’ financial interests as combined. Ivanka Trump has been credited by Trump with advocating for an administration policy that promises to be lucrative for real estate developers and investors. She denies any impropriety.

Kushner’s own recusal on real estate matters in front of the government would not in itself prevent him from taking actions in other policy areas that could entice foreign investors to Cadre.

In all, Cadre’s investment arm manages more than $522m in assets, according to its latest filing to the Securities and Exchange Commission, which was submitted at the end of March.

Kushner has had financial ties to several different countries. His family’s single most expensive purchase, a skyscraper on Manhattan’s Fifth Avenue, was last year refinanced by a fund backed by the Qatari government. In an article for the Washington Post defending the family’s businesses, Kushner’s father, Charles, said foreign investments were “a legal and appropriate stream of funding”.

As Trump’s special representative in the Middle East, Kushner has developed a close relationship with Saudi Arabian officials, particularly prince Mohammed bin Salman. Cadre says it does not have any sovereign wealth funds among its investors.

Sources familiar with Cadre’s setup said a small amount of money in the Goldman-Cadre vehicle, estimated at about $1m, came from Saudi Arabia. Other funding arrived through vehicles based on the British Virgin Islands, adding another layer of offshore secrecy to its origins.

Virginia Canter, the chief ethics counsel at the watchdog group Citizens for Responsibility and Ethics in Washington, said the opaque investments in Cadre would continue raising concerns as Kushner carried out his government duties.

“It was one of the only assets that Kushner retained and it continues to collect foreign investors without transparency,” said Canter, a former White House attorney for Obama and Clinton.

Kushner owns a stake worth between $25m and $50m in a “holding company for” Cadre, according to his most recent financial disclosure form, which he filed in May 2018. Kushner and his wife estimate their total wealth at between $235m and $812m.

Cadre was one of dozens of holdings added to a revised version of Kushner’s 2017 financial disclosure form that corrected his original filing.

Williams, Cadre’s chief executive, has said the firm is “democratizing” real estate investment. The small print of its website says its offerings are intended only for people who earn at least $200,000 a year or have a net worth of $1m excluding the value of their home. The company requires a minimum investment of $50,000.

Cadre recently announced plans to raise multimillion-dollar funds to invest in real estate developments in parts of the US covered by the Trump administration’s “opportunity zones” program, which offers valuable tax breaks to developers and investors.

The program was championed by Ivanka Trump, according to her father, who said at the White House that Ivanka had been “pushing this very hard”. The remarks raised allegations that policy she worked on could benefit her husband financially. She has denied any impropriety.

Sorgente: Company part-owned by Jared Kushner got $90m from unknown offshore investors since 2017 | US news | The Guardian