No voice, no future? Roma ignored as Europe goes to polls | World news | The Guardian 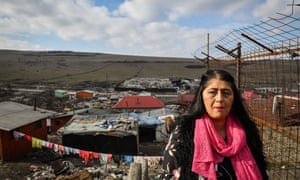 Pata-Rât is just a few miles outside Cluj-Napoca, in north-west Romania, but it feels a world away from the pretty streets and baroque architecture of the bustling city centre. Here, rubbish from the city and region is deposited in vast mounds, and the air is thick with the smell of rotting waste.

About 1,800 people call Pata-Rât home, almost all of them of Roma origin, living in depressing and unsanitary conditions in a makeshift camp backing onto a landfill site. Many were evicted from housing in the city centre and forced into the camp’s crowded huts.

Persecution of the Roma brings shame on Europe

Linda Zsiga, a 37-year-old Roma woman who spent several years living in Pata-Rât after she and her family were evicted with just two days notice from dwellings in central Cluj back in 2010, has been campaigning to close the site, and rehouse its residents in social housing inside the city. So far, she has had little success, despite government promises and pressure from European bodies.

“Nobody deserves to live here,” she said, waving in the direction of the main dump. “When I lived here, I couldn’t even open the windows in my own house, because of the smell. Everyone who needs social housing should be able to get it.”

Zsiga wanted to stand in this weekend’s European elections, as an MEP candidate for a newly founded left-leaning coalition, but the group was not able to collect the 200,000 signatures a new party requires to register in Romania. Across the European Union, there are only a tiny number of Roma candidates standing in the polls, and even fewer are likely to get elected.

Pata-Rât is one of many stark reminders of the poor conditions in which millions of Roma people live. While some progress has been made on access to education and healthcare in the past decade, in many parts of Europe Roma are confined to effective ghettos, and subject to widespread discrimination.

There are believed to be as many as 10 million Roma people in Europe, as many as a medium-sized EU country, and the community’s lack of representation is particularly alarming at a time when populist forces are stepping up a campaign to demonise them in many countries.

In France earlier this year, vigilante groups attacked Roma people in Paris after fake news reports alleged they were kidnapping children. In Italy, one of the first acts of the far-right interior minister, Matteo Salvini, last year was to call for the creation of a register for Roma people. In Hungary, a newly founded extreme-right party called on its followers this week to fight “gypsy crime”.

“It’s difficult for politicians to sustain Islamophobic hysteria for too long. The panic about refugees and migrants has subsided a bit and the Roma have become a scapegoat again,” said Bernard Rorke, of the European Roma Rights Centre.

In central and eastern European countries such as Slovakia, Hungaryand Romania, many Roma live in ghetto-like conditions similar to those at Pata-Rât, confined to ramshackle settlements on the edge of towns and often excluded from education and the jobs market.

“To make changes it is crucial to have people where decisions are taken,” said Soraya Post, an MEP from Sweden’s Feminist Initiative, who is of Roma origin and helped set up an annual Roma week in Brussels.

Post is standing for re-election, but has few Roma colleagues in the current parliament: one German Green MEP and one from Fidesz, the party of Hungarian prime minister, Viktor Orbán, with whom Post says it is not feasible to work.

The Hungarian government promotes itself as a model for Roma empowerment, but critics say the government has merely shunted many people into low-paid public works programmes, entrenching segregation.

Rorke characterised the Hungarian attitude to the Roma community as “keep them in poverty, keep them in public works schemes, and make sure they’re not doing crystal meth and not getting pregnant”. This reinforced segregation and discrimination rather than combatting it, he said.

In Romania, where there are around 1 million or more Roma people, there is not a popular far-right party, but the self-perpetuating cycle of segregation and discrimination has long been part of society. There have been numerous national and European schemes and funding projects aimed at Roma people, but without proper consultations they often fail to make significant change.

“So far, quite a lot of money has been spent, but with little effect. We need to rely on public consultations and identify specific needs, rather than find them in the imagination of politicians,” said the Romanian EU official Ciprian Necula, who helped organise a pre-election debate over the weekend with candidates from seven different Romanian parties that focused exclusively on Roma issues.

At Pata-Rât, when families first moved into the area around the rubbish dump, children were taunted for being dirty and smelly, said Zsiga, reinforcing the cycle of segregation and discrimination.

After nearly a decade living at the camp, most of the makeshift houses now have running water and electricity, but the camp is still hardly fit for habitation, and is cut off from public transport routes or paved roads. 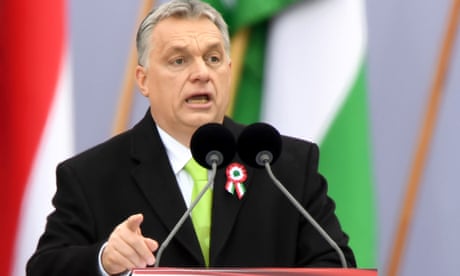 Hungarian leader says Europe is now ‘under invasion’ by migrants

Two years ago, Zsiga moved into an apartment in Cluj, one of around 20 homes funded by a Norwegian governmental grant, but many of her family members still live at the camp.

Not everyone is desperate to leave: some families in the camp scrape by on money they make from sorting recyclables from the landfill site, and fear that if moved, they would lose even this small source of income. Zsiga, however, said that any opposition to its closure was due to a lack of self-esteem among the community.

Post, the Swedish MEP, agreed: “The consequences of centuries of exclusion make people feel they cannot challenge the society. Your self image is also that you don’t actually belong to this society.”

Sorgente: No voice, no future? Roma ignored as Europe goes to polls | World news | The Guardian