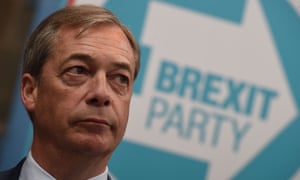 In three weeks’ time, it is entirely plausible that Nigel Farage’s Brexit party will triumph in the European parliamentary elections. It will be the greatest victory for bigotry in politics since the EU referendum campaign; it will be a shot in the arm for the Tory hard Brexiteers, emboldening them and providing them with renewed legitimacy; it will damage the chances of a soft Brexit; and it will inflict probably terminal harm on any prospect of a second referendum. Preventing this completely and utterly inarguable outcome should – you would think – preoccupy every single remainer and every single self-declared opponent of Tory rule. It doesn’t, because for the “stop Brexit or bust” brigade, punishing Labour for failing to repudiate a referendum that it lost less than three years ago is all that apparently matters in politics – and if the country burns as a consequence, then so be it.

Nigel Farage is fuelled by the betrayal myth. And Brexit is only the start

Yesterday, Labour’s national executive committee reaffirmed the party’s position on Brexit: that is, it would prioritise a general election to remove the Tories from power, and if that wasn’t possible, it would “support all options remaining on the table, including campaigning for a public vote”. This isn’t controversial, you would think: it would be odd for the NEC to usurp the decision of the party’s sovereign body, and – until now – the conference policy has been lauded by advocates of a second referendum. Yet for the monomaniacal ultra-remainers – who treat those of us who campaigned and voted for remain but are willing to accept compromise as bitter enemies, on a par with Nigel Farage or Jacob Rees-Mogg – this is a great betrayal that makes voting Labour a disgrace.

What exactly are they asking of Labour? This isn’t a rhetorical question. In 2017, Labour whipped its MPs to trigger article 50, and campaigned in the general election to accept the referendum result. This, it was said, would lead to electoral doom as enraged remainers fled elsewhere. Instead, it helped Labour secure the same vote share as Tony Blair did 16 years earlier, depriving the Tories of their majority. If Labour had campaigned against the referendum result in an election Theresa May wanted to run solely on Brexit, she would have won her majority and rammed her deal through parliament long ago. But since then, Labour has not only softened its Brexit position but also whipped its MPs twice to vote for a second referendum. In other words, Labour has left itself exposed to claims it has gone back on its general election commitments, as well as risking its chances of winning an election – 41 of the 54 Tory-held target seats Labour needs to win to form a government voted leave. The reason a second referendum hasn’t been approved isn’t because Labour failed to back it – it has, twice – but because most MPs in a Tory-DUP parliament are strongly opposed to one happening.

The chasm that exists between the ultra-remainers and political reality is so vast, it nearly contains enough room for their arrogance and entitlement. Does the Tories’ relentless attempt to portray Labour as the Stop Brexit party not bother them? “The biggest thing you could do to help the Tories in the next election is to make Labour a party of remain,” says Spectator editor Fraser Nelson in his podcast. You are far more likely to encounter someone on the doorstep angrily denouncing Labour for trying to stop Brexit than failing to do so.

Perhaps, miraculously, if a majority of MPs opt for a second referendum, those of us who campaigned for remain will do it all over again. We will probably lose, again, because of those who are likely to lead the next remain campaign. Senior ultra-remainers privately tell me that, oh well, another defeat will leave us in the same position as now. Can I gently ask, are they serious? Losing a far more bitter and divisive campaign than even the last will lead to a form of Brexit triumphalism that will make the current leavers look humble; our politics will be disfigured for a generation or more. 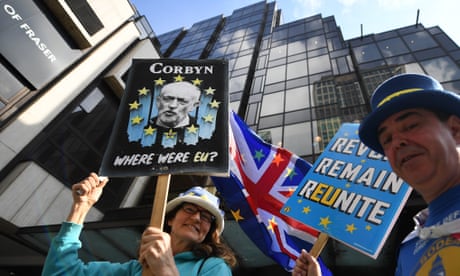 Some of the “stop Brexit or bust” brigade will vote Liberal Democrat, a party that backed and implemented some of the cruellest policy measures in peacetime Britain and helped plunge the country into this mess; some will vote Change UK, a party whose soon-to-be leader opposed a second referendum until it became a convenient wedge issue with which to beat the Labour leadership, and which has been embroiled in multiple racism and bigotry scandals within weeks of forming. And when Farage triumphs in three weeks’ time, they will sink into despair, and, with their arms outstretched, ask “Why?”

Labour’s left was once bitterly denounced for putting purity ahead of power. With Farageism on the brink of winning a national poll, and with Labour having already jeopardised the coalition of remainers and leavers it needs to win, the same people who once angrily made this argument are themselves most guilty of it. Imagine being a second referendum supporter who is so furious with a party that has twice voted for their objective that you’d allow your supposed mortal enemy to win an election and destroy your own cause. Well, you don’t have to imagine it: because in three weeks’ time, that is what will happen.

• Owen Jones is a Guardian columnist

Sorgente: How ultra-remainers could score a spectacular own goal on Brexit | Owen Jones | Opinion | The Guardian