Facing up to Europe’s far right – podcast | News | The Guardian 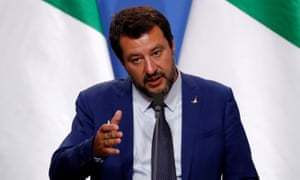 The EU elections are a test for mainstream parties as populists appear to be gaining momentum. Anushka Asthana is joined by Jennifer Rankin, Shaun Walker and Angelique Chrisafis to assess the rising tide of populism in Europe

The EU elections, beginning on 23 May, are a test for Europe’s mainstream parties as populists appear to be gaining momentum with stark anti-immigration campaigns. Anushka Asthana is joined by Jennifer Rankin, Shaun Walker and Angelique Chrisafis to assess the rising tide of populism across the continent. Plus: Simon Hattenstone on what an accidental voicemail recording revealed about G4S’s private ambulance service

Next week’s European parliamentary elections present an opportunity for the continent’s far-right and populist parties. With 751 seats up for grabs, parties such as National Rally in France, Fidesz in Hungary and the League in Italy have been in discussions about forming a parliamentary grouping to rival the traditional centre-left and centre-right groupings.

Populists are not predicted to form a majority in the parliament and history suggests they will struggle to present a united front. However, even without a formal alliance, an increased intake of far-right MEPs has the potential to be hugely disruptive in Brussels.