Theresa May is to ask for another brief Brexit extension in order to seek a compromise withdrawal plan with the Labour party, she has announced, signalling the likelihood of Downing Street backing a softer Brexit.

In a brief TV statement inside No 10 following a seven-hour cabinet meeting, the prime minister said she would hold talks with Jeremy Corbyn to seek a Brexit plan they could agree on and “both stick to”.

In response, Corbyn said he was “very happy” to take part in the talks, and said he accepted the need to go into the talks in a spirit of cross-party cooperation.

However, strongly pro-Brexit Conservative MPs expressed outrage at the plan. Boris Johnson said he feared it would lead to “a very bad deal indeed”, while Jacob Rees-Mogg said the prime minister wanted to collaborate with “a known Marxist”. 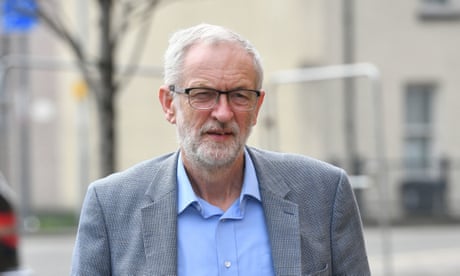 In her statement May said that if agreement with the Labour leader was impossible, the plan would be to put to a vote in parliament a series of Brexit options, with the government committing to enact whichever idea won support.

This would require another extension to article 50, May said, but added that she hoped this would not go beyond 22 May, thus ensuring the UK would not need to take part in European elections.

“This is a difficult time for everyone,” she said. “Passions are running high on all sides of the argument. But we can and must find the compromises to deliver what the British people voted for.”

The prime minister’s move would seem to point inevitably to a softer form of Brexit. Labour has made it plain it will not back any plan without customs union membership, and a runoff vote in parliament could lead to even closer ties with the EU.

In his response Corbyn said: “We will meet the prime minister. We recognise that she has made a move.

“I recognise my responsibility to represent the people that supported Labour in the last election and the people who didn’t support Labour but nevertheless want certainty and security for their own future and that’s the basis on which we will meet her and we will have those discussions.”

It remains to be seen how leave-minded ministers in May’s cabinet will react. However, members of the hard-Brexit-backing European Research Group of Tory MPs responded with fury.

Speaking after a meeting of the group Rees-Mogg, who chairs the ERG, said: “You do find that leaders who decide to go with the opposition rather than their own party find their own party doesn’t plainly follow.”

He added: “I think getting the support of a known Marxist is not likely to instil confidence in Conservatives.”

Business groups expressed cautious optimism but called for swift results. Adam Marshall, the head of the British Chambers of Commerce, said: “The clock is still ticking, and avoiding a messy and disorderly exit from the EU is still the top priority for our business communities. The government must take firm action, now, to ensure that this is not allowed to happen by default.”

May’s Brexit plan has been rejected by the Commons three times, and two attempts by MPs to find a different preferred option have both ended in deadlock.

The prime minister said the endless delay was “doing damage to our politics”, but ruled out a no-deal departure. She said: “I have always been clear that we could make a success of no deal in the long term, but leaving with a deal is the best solution.”

May praised the “best efforts of MPs” to find a solution – a contrast to her last and much-criticised Downing Street statement, in which she appeared to blame parliament for the impasse – but said this had not been possible.

“So today I am taking action to break the logjam: I am offering to sit down with the leader of the opposition and to try to agree a plan that we would both stick to, to ensure that we leave the European Union and that we do so with a deal,” she said.

“The ideal outcome of this process would be to agree an approach on a future relationship that delivers on the result of the referendum, that both the leader of the opposition and I could put to the house for approval, and which I could then take to next week’s European council.

“However, if we cannot agree on a single unified approach, then we would instead agree a number of options for the future relationship that we could put to the house in a series of votes to determine which course to pursue.”

She added: “Crucially, the government stands ready to abide by the decision of the house.”

For this to happen, May said, Labour “would need to agree to this too”.

Sorgente: May to ask for short Brexit extension and reaches out to Labour | Politics | The Guardian