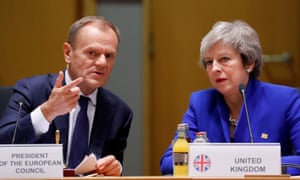 All of the latest Brexit developments – live updates

Theresa May has written to Donald Tusk, the president of European council, to ask for Brexit to be delayed until 30 June while she battles to find a cross-party agreement on the way forward.

Rather than the year-long flexible extension to article 50 recommended by Tusk, the prime minister suggests 30 June as the new departure date. It is the same date requested by the government last month, but rejected by EU leaders in Brussels.

Unless a new date is signed off at an emergency EU summit next Wednesday, Britain is due to leave without a deal on 12 April.

In the letter, drafted after a second day of talks with Labour, May says both parties accept the need to pass the legally binding withdrawal agreement, but have not reached consensus on the future relationship. If that is not possible, May says, she hopes to agree with Labour a process for parliament to choose between possible options, by which both sides would promise to abide.

That could allow parliament to ratify the deal, pass the necessary legislation and leave before 22 May, allowing the UK to avoid participating in European elections, the prime minister says.

The request for a short extension is likely to exasperate remain-supporting cabinet ministers who have urged her to seek a longer delay. But May would have faced a backlash from leavers if she had requested a longer period. In a long cabinet meeting earlier this week ministers made several strongly worded arguments against any extension at all.

Acknowledging that it was “frustrating” that the process had not yet concluded, she said the UK wished to ensure it was possible to withdraw in time to cancel European parliament elections “but will continue to make preparations to hold the elections should this prove not possible”.

The move came as the Guardian reported that Tusk was pushing the EU27 to offer May a one-year “flexible” extension to article 50 with an option to leave earlier once the withdrawal agreement was ratified by parliament.

Tusk, who is said to have described the plan as “the only reasonable way out”, was due to tell leaders at a summit on Wednesday that the “flextension” would avoid them having to consider extra delays every few weeks.

The EU27 would need to unanimously agree to the plan, which Tusk was backing after hours of preparatory meetings ending late on Thursday, senior EU sources said. 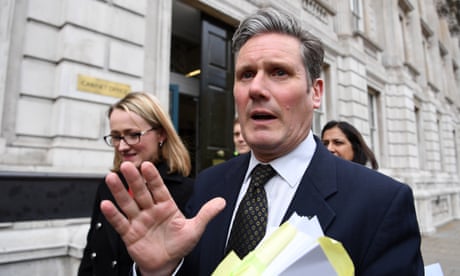 Theresa May to make written Brexit offer to Jeremy Corbyn

The former Polish prime minister is determined to give Downing Street as much flexibility as possible to avoid any suggestion that Brussels is seeking to trap Britain in the EU.

But the prime minister’s suggestion of 30 June is unlikely to hold much appeal to the EU27.

While May said in her letter that she would hold European elections should the UK remain in the EU past 22 May, the proposal would create yet another cliff-edge date in the summer.

The EU would be in a transition phase, with the terms of Juncker and Tusk coming to an end, and it opens up the possibility of leaders being dragged into making serial extensions over time.

The UK’s nominal last day under the year-long extension would probably be Friday 10 April 2020 – offering a weekend buffer zone in the event of no deal – but Britain would be expected to leave well before then.

A senior official said Tusk told senior figures on Thursday evening it was the best solution for both sides.

“The only reasonable way out would be a long but flexible extension,” Tusk was said to have told officials. “I would call it a ‘flextension’. How would it work in practice? We could give the UK a year-long extension, automatically terminated once the withdrawal agreement has been accepted and ratified by the House of Commons.”

The source said Tusk told officials that “even if this were not possible, then the UK would still have enough time to rethink its Brexit strategy. Short extension if possible and a long one if necessary. It seems to be a good scenario for both sides, as it gives the UK all the necessary flexibility, while avoiding the need to meet every few weeks to further discuss Brexit extensions.”

There will be concerns in some EU capitals about both the length of the extension, given the potential for the British government to meddle in the EU’s long-term planning, and the uncertainty it would create about the UK’s position in the bloc.

The failure of the UK parliament to coalesce around a post-Brexit vision will be a source of frustration for Emmanuel Macron, the French president, who has insisted the UK must have a “credible plan” for the EU to offer any further extension.

EU sources said the plan would, however, offer the reassurance that Britain would be making its own fortune and not dragging Brussels into its crisis.

The UK would have to hold elections to the European parliament on 23 May under the Tusk plan, but British MEPs would leave the chamber once the UK had left the bloc.

MEPs from the other 27 member states would then step in, sources suggested.

The development comes as the attorney general, Geoffrey Cox, said in an interview with the BBC he thought the offer from the EU was “likely to be a long one” and would have to be accepted by Downing Street.

The current legal position is that the UK is to leave the EU at 11pm BST on 12 April. The prime minister had said earlier this week she would seek a short extension until 22 May to allow cross-party talks with the Labour leader, Jeremy Corbyn, to come to fruition.

When will Brexit day be? The possible extension options

But speaking to the European parliament within 24 hours of May making her intent clear, the European commission president, Jean-Claude Juncker, rejected it. He instead set an “ultimate deadline” of 12 April for the Commons to approve the withdrawal agreement.

“If it has not done so by then, no further short extension will be possible,” he said. “After 12 April, we risk jeopardising the European parliament elections, and so threaten the functioning of the European Union.”

With the Commons tying the prime minister to avoiding a no-deal Brexit, and the EU preparing an option that it believes will suit Downing Street, the threat of the UK crashing out of the bloc is heavily diminished.

The chancellor, Philip Hammond, has in recent days backed the idea of a flextension.

Meanwhile, May is expected to write to Corbyn to set out the government’s offer on Brexit, with negotiations due to resume in Downing Street on Friday.

With five days to go before the prime minister travels to Brussels to request a Brexit delay, little progress appeared to have been made on finding a compromise deal both Labour and the Conservatives can back.

Sorgente: May asks for Brexit extension to 30 June as Tusk offers up to a year | Politics | The Guardian