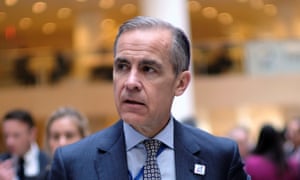 The global financial system faces an existential threat from climate change and must take urgent steps to reform, the governors of the Bank of England and France’s central bank have warned, writing in the Guardian.

In an article published in the Guardian on Wednesday aimed at the international financial community, Mark Carney, the Bank’s governor, and Villeroy de Galhau, the governor of the Banque de France, said financial regulators, banks and insurers around the world had to “raise the bar” to avoid catastrophe.

They said: “As financial policymakers and prudential supervisors we cannot ignore the obvious physical risks before our eyes. Climate change is a global problem, which requires global solutions, in which the whole financial sector has a central role to play.”

The warning comes as concern over the impact of climate change and the lack of urgent action is increasing, reflected in the Extinction Rebellion protests and schoolchildren’s strikes across the world.

The heads of two of the world’s most influential central banks urged other financial regulators around the world to carry out climate change stress tests to spot any risks in the system, while also calling for more collaboration between nations on the issue. They warned that a “massive reallocation of capital” was necessary to prevent global warming above the 2°C maximum target set by the Paris climate agreement, with the banking system required to play a pivotal role.

“If some companies and industries fail to adjust to this new world, they will fail to exist,” Carney and De Galhau said.

Climate change poses significant risks to banks and insurers from rising instances of catastrophic weather-related events, such as heatwaves, droughts and floods, which could land them with significant losses.

There are also risks for financial firms as governments accept the need to tackle climate change because banks that have lent to companies reliant on burning fossil fuels run the risk of steep financial losses.

Carney has previously warned that plunging sales of diesel cars, due to new vehicle emissions tests and changes in the tax system, which have had knock-on effects for manufacturers and the wider economy, are an example of this in action.

Banks could find they have stranded assets that turn out to be worthless if they are reliant on burning fossil fuels. Threadneedle Street has said as much as $20tn (£15.3tn) of assets could be wiped out by climate change if it is not effectively addressed.

The open letter from Carney and De Galhau accompanies the launch of a report from the Network for Greening the Financial System (NGFS), an international group of central banks and financial regulators, outlining the steps necessary for financiers to tackle climate change.

Global warming has typically been of secondary concern to central bankers since the 2008 financial crisis, as they grappled with the immediate threat of banking failures. However, there is growing recognition that action is needed to fight the risks it poses.

Although they have received praise for advancing the debate about climate change, Carney, central bankers and financiers have been criticised for expecting the banking industry to reform itself without tougher regulation being introduced.

Frank van Lerven, a senior economist at the New Economics Foundation thinktank, said: “Central banks across the world, and in the UK, have done a very good job of identifying the problem. The question is whether they have the right balance between being thought leaders on this issue and identifying problems and taking action.”