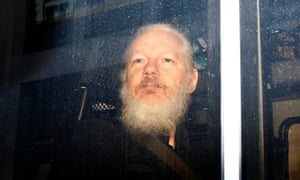 Political pressure is mounting on Sajid Javid to prioritise action that would allow Julian Assange to be extradited to Sweden, amid concerns that US charges relating to Wikileaks’ activities risked overshadowing longstanding allegations of rape.

More than 70 MPs and peers have written to Javid and the shadow home secretary, Diane Abbott, urging them to focus attention on the earlier Swedish investigations that Assange would face should the case be resumed at the alleged victim’s request.

In a letter coordinated by Labour’s Stella Creasy and Jess Phillips and seen by the Guardian, the MPs declare: “We do not presume guilt, of course, but we believe due process should be followed and the [Swedish] complainant should see justice be done.”

They call on Javid and Abbott to “champion action” to ensure that extradition is a possibility should Swedish authorities choose to pursue it.

Assange first entered the Ecuadorian embassy in 2012 in order to avoid extradition to Sweden over sexual assault allegations, which he has always denied. While the statute of limitations on one of the allegations has expired, the other will not be reached until August 2020.

Other signatories to the letter include the former Conservative ministers Sam Gyimah and Nick Boles, as well as all 11 members of the Independent Group of MPs, including Chuka Umunna, Luciana Berger and Anna Soubry. Labour’s Stephen Kinnock and Peter Kyle, the SNP’s Alison Thewliss and the Lib Dem deputy leader, Jo Swinson, as well as eleven peers, have attached their names.

The letter attracted growing support as the Crown Prosecution Service confirmed that in the event of competing extradition requests for the same person, under section 179 of the 2003 Extradition Act it falls to the home secretary to determine which one goes first – based on criteria including the relative severity of the offences, the date of the first warrant and the places where they were committed.

The cross-party intervention came after Javid and Abbott clashed on Thursday over Assange’s arrest without addressing the accusations against him in Sweden in their exchanges, giving rise to concerns that his alleged victims have been forgotten.

Elisabeth Massi Fritz, lawyer for the Swedish woman whose case remains outstanding, told the Guardian that the news of his arrest came as a “shock” and that there had been no prior notice, calling for the Swedish police investigation to be reopened.

Abbott was criticised on Friday over an interview on the Today programme in which some backbencher Labour MPs said that she downplayed the allegations of sexual assault.

Meanwhile on Friday a man with close ties to Assange was arrested while trying to leave Ecuador, according to the country’s interior ministry. The man was named by the Associated Press as Swedish software developer Ola Bini. Authorities said they were investigating “how WikiLeaks would have intervened in domestic [Ecuadorian] politics” and called Bini a “collaborator” – a claim rubbished by his friends as absurd.

The parliamentarians’ letter is a pointed counter to Abbott’s comments earlier on Friday when she said Assange’s current detention was not about “the rape charges, serious as they are, it is about WikiLeaks and all of that embarrassing information about the activities of the American military and security services that was made public.”

The letter to Javid and Abbott points out that time is limited for the UK to provide assistance to Sweden, given the allegation of rape has a limitation period which expires in August 2020.

“Other allegations are already time bound because of the unavailability of Mr Assange. Justice has already been denied in respect of those allegations. There is a serious risk that if the UK does not give every cooperation to any renewed request from Sweden there could be a further injustice,” the letter said.

Assange’s lawyers meanwhile confirmed that US prosecutors have 65 days to submit a full set of charges, raising the prospect of additional criminal allegations being introduced that would result in a far longer sentence.

In a statement issued on Friday, his legal team confirmed he would resist the extradition that sets a “dangerous precedent where any journalist could face US charges for publishing truthful information about the United States”. Jennifer Robinson, a barrister at Doughty Street Chambers, added: “The US now has 65 days to submit its full extradition request.”

The MPs said they would pass no judgment on the attempts to extradite Assange to face charges in the United States but said the UK should proactively inform the Swedish authorities that it would have Britain’s full cooperation, and noted with concern that the Swedish authorities did not appear to be aware of the plans made to arrest Assange.

“We urge you both to confirm that you will give every assistance to Sweden should they want to revive and pursue the investigation. We must send a strong message of the priority the UK has in tackling sexual violence,” the letter says.

If the home secretary were to rule in favour of a Swedish extradition, lawyers might argue that the UK supreme court has already considered Assange’s case in 2012 and deemed that his extradition to Scandinavia was lawful. It could mean his extradition case could be dealt with swiftly.

Swedish lawyers, however, said on Friday that they doubt Assange will ever stand trial in Sweden even if prosecutors decide to reopen an investigation into a rape accusation.

“I think it would be a very uphill task to reopen the investigation in Sweden,” Sven-Erik Alhem, a former prosecutor, told the Swedish news agency TT. “Testimony usually weakens with time, and it’s now been 10 years.”

In addition, Alhem said, Assange was “not about to volunteer to come to Sweden, and a new international arrest warrant for him would of course have to be issued for him here. In all, it seems a very steep hill to climb.”

The Swedish prosecution service is considering whether to reopen the investigation, which was shelved in 2017 because Assange could not be reached.

The prosecution service said on Thursday that Eva-Marie Persson, a deputy chief prosecutor in Gothenburg, would handle the case. “We’ll examine the matter to determine how we proceed,” Persson said. “We cannot promise any timetable for when decisions will be made.”

The rape accusation against Assange dates from August 2010. The alleged victim accused him of having sex with her while she was sleeping, without using a condom, and despite her repeated refusals to have unprotected sex with him.

A separate investigation into allegations of unlawful coercion and molestation against Assange by a second woman in Sweden was halted in August 2015 due to time restrictions.

Assange has always denied all the allegations.