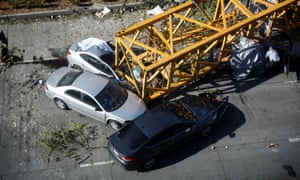 Four people were killed and three injured when a construction crane fell from a building on Google’s new Seattle campus on to one of the city’s busiest streets during a storm.

The four people – one female and three male – had died by the time firefighters had arrived on Saturday afternoon, the fire chief, Harold Scoggins, said. Two of the dead were ironworkers who had been inside the crane, while the other two were people who were inside cars, the fire department spokesman Lance Garland said.

A 25-year-old mother and her four-month-old daughter were in a car that was smashed by the crane on its passenger side, and both managed to escape with only minor injuries, said the Seattle mayor, Jenny Durkan. They and a 28-year-old man were taken to the Harborview medical centre. A fourth person also was injured and treated at the scene.

The Harborview spokeswoman Susan Gregg said on Saturday night that the mother and the baby had been discharged, while the man injured was in satisfactory condition.

The King county medical examiner’s office said it would not release names of people who died until Monday.

The crane collapsed near the often-congested intersection of Mercer Street and Fairview Avenue just north of downtown in the South Lake Union neighbourhood shortly before 3.30pm, Scoggins said.

With Amazon, Google and other tech companies increasing their hiring in Seattle, the city has more cranes building office towers and apartment buildings than any other in the United States.

Durkan said the city had a good track record with crane safety but that officials would conduct a review. “It’s a horrible day in Seattle when something like this happens,” she said.

Officials do not yet know the cause of the collapse. Police and the state authorities were investigating, which Durkan said could take months.

Daren Konopaski, the business manager for the International Union of Operating Engineers Local 302, which represents heavy-equipment operators, told the Seattle Times he understood the crane was being dismantled when high winds moved through the area.

“We don’t know, but that’s what seems to have happened here,” he said. “We are in the process of trying to get information.”

Durkan confirmed that people were actively working on top of the building on Saturday, but she didn’t say whether the crane was being dismantled.

“The wind was blowing really strong,” witness Esther Nelson told the Times, adding that the crane appeared to break in half. “Half of it was flying down sideways on the building,” she said. “The other half fell down on the street, crossing both lanes of traffic.”

The office building the crane fell from was badly damaged, with several of its windows smashed.

A Google spokesperson said in a statement that the company was saddened to learn of the accident and that they were in communication with Vulcan, the real estate firm that is managing the site and working with authorities.

Sorgente: Four killed in Seattle after crane collapses from new Google building | US news | The Guardian