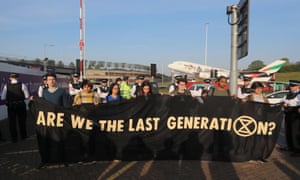 Youth activists have taken the Extinction Rebellion protests to Heathrow on the fifth day of action, demonstrating beside the main roundabout on the road to the airport.

The activists, all born after 1990, unfurled a banner asking: “Are we the the last generation?” as dozens of police prevented them from blocking the road.
The protesters said they were risking arrest to highlight the dangers of climate change. “To everyone reading about this, I’m here because I love you and fear for your future and my future. It’s that life and that fear that gives me courage,” said Oscar Idoe, 17, from Bristol.

About 20 protesters were moved on to the pavement by police at one of the road entrances to the airport. Protesters stood by the tunnel that leads to terminals two and three, but all roads the roundabout were open as the group remained surrounded by police.

A spokesman from XR said the aim of the day’s action was not to stop people flying but to raise awareness.

Activists have been occupying four landmark sites in central London since Monday in efforts to highlight the escalating climate crisis and demand urgent government action.

The Extinction Rebellion protest is inspired. But what comes next?

On Thursday night the Metropolitan police said they had arrested more than 500 people so far and had cancelled leave for some officers over Easter.

“This is putting a strain on the Met and we have now asked officers on the boroughs to work 12-hour shifts; we have cancelled rest days and our violent crime taskforce have had their leave cancelled,” the force said in a statement.

Sajid Javid, the home secretary, had earlier called on police to use the “full force of the law” against the protesters.

He sent out a series of tweets condemning “any protesters who are stepping outside the boundaries of the law”, and calling on the police to “take a firm stance” against protesters who were “significantly disrupting the lives of others”.