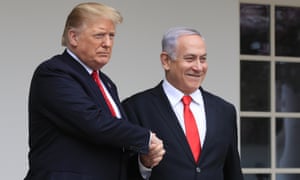 Exclusive: letter from former officials says Europe must stand by the two-state solution

High-ranking former European politicians have condemned the Trump administration’s one-sided Israel-Palestine policy and called in a letter for Europe to reject any US Middle East peace plan unless it is fair to Palestinians.

“It is time for Europe to stand by our principled parameters for peace in Israel-Palestine,” read the letter, calling for a two-state solution in which Israel and Palestinian states live side by side.

Europe, it said, should reject any plan that does not create a Palestinian state alongside Israel with Jerusalem as the capital for both countries.

“Unfortunately, the current US administration has departed from longstanding US policy,” it said, criticising Donald Trump’s 2017 recognitionof “only one side’s claims to Jerusalem”.

Washington had also “demonstrated a disturbing indifference to Israeli settlement expansion” in the occupied West Bank and cut hundreds of millions of dollars in aid to Palestinians, a move the letter said was “gambling with the security and stability of various countries located at Europe’s doorstep”.

Since taking office, and amid praise from Israel’s government, Trump has taken measures seen as both punishing to Palestinians and which also stifle the viability of a Palestinian state. 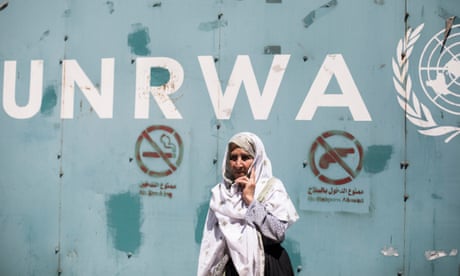 ‘We need more food, not less’: US cuts leave Palestinian refugees in crisis

The US president has promised to unveil a still-secret “ultimate deal” for Israelis and Palestinians, although the Palestinian leadership preemptively rejected it as biased, and Israel’s leader, Benjamin Netanyahu, categorically ruled out a Palestinian state.

The US team tasked with drafting the plan includes Trump’s son-in-law, Jared Kushner, and the US ambassador to Israel, David Friedman, a bankruptcy lawyer who has been vocal in his support for Jewish settlements in the Palestinian territories.

Friedman told the pro-Israel lobby group the American Israel Public Affairs Committee in Washington last month that Trump was “Israel’s greatest ally ever to reside in the White House” and now was the time to push through a plan as his administration understood Israel should have permanent military control over the Palestinian territories.

On Tuesday, Netanyahu won the Israeli election and is expected to secure a fifth term in office by forging a coalition government from rightwing and pro-settler parties.

A few days before the polls, the prime minister said that, if he won, he planned to annex settlements in the occupied West Bank, a move Palestinians see as the end of their hopes for a state as there would be no unbroken land on which to build it.

Asked in an interview with the domestic Israel National News website if his “friends” in the White House knew about the plan, Netanyahu replied: “Sure.”

He said: “Three things I said to them: first, I’m not tearing any Jew out [of the West Bank]; any community. There aren’t going to be any settlers or settlements that are going to be torn. The second point is we’re not going to divide Jerusalem. The third point is, we’re going to continue controlling the entire territory west of the Jordan [River],” he said in reference to the occupied West Bank.

Queried about Netanyahu’s annexation plans, Trump’s secretary of state, Mike Pompeo, said they would not damage the undisclosed peace plan, hinting the US proposal did not envision Palestinian statehood.

“I think that the vision that we’ll lay out is going to represent a significant change from the model that’s been used,” said Pompeo, who has previously stated he believes, as a Christian, it was possible God made Trump president to save the Jewish people.

The letter by former European officials said Europe must “be vigilant and act strategically” when Trump presented the new plan. It was sent on Sunday to Federica Mogherini, the EU’s high representative for foreign affairs, and serving European foreign ministers.

“[We] are convinced that a plan that reduces Palestinian statehood to an entity devoid of sovereignty, territorial contiguity and economic viability would severely compound the failure of previous peacemaking efforts, accelerate the demise of the two-state option and fatally damage the cause of a durable peace for Palestinians and Israelis alike,” it said.

If that was not possible, the letter said, “Europe must pursue its own course of action”.

Sorgente: Europe urged to reject US Middle East plan if it is unfair to Palestinians | World news | The Guardian