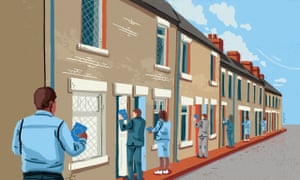 This is a crucial chance to show politicians how we feel now about leaving Europe. The turnout must be huge

In just five weeks’ time, Britain will have a referendum on Brexit. This will take the form of elections to the European parliament, but in reality this will be a pre-referendum, or, if you like your neologisms ugly, a preferendum. So there is now one simple task: to maximise the vote for parties that support a confirmatory referendum on Brexit, giving the British people a democratic choice between accepting the negotiated Brexit deal and remaining in the EU.

If Labour’s manifesto clearly commits to that confirmatory referendum, then Labour is among those parties. If Labour is not clear enough, then turn to the Liberal Democrats, Change UK, the Green party, the Scottish National party or Plaid Cymru. At the end of the day, what will matter more than the precise allocation of seats is that we can say: “X million people voted for pro-European, pro-referendum parties, while only Y million voted for unambiguously pro-Brexit parties such as Ukip, Nigel Farage’s new Brexit party and the Conservatives.” In this vital, bottom-line reckoning, there is no such thing as a wasted vote. Every single voice will count.

There is still a small chance that Conservative MPs will be so terrified of electoral Armageddon for their party on 23 May that they will swing behind Theresa May’s deal in a desperate final meaningful vote in parliament, thus aborting this election at the last minute; but the probability is small and a chance we have to take.

It’s a pity that the most unambiguously pro-European and pro-referendum parties have not had the time, or the shared political will, to make a single combined candidates’ list. This has been done elsewhere, for example in Poland, where a multi-party European coalition is fielding a formidable list of candidates against its own nationalist-populist governing party, a farrago of Polish Farages.

The new Change UK party gathers some of the bravest, most independent-minded national parliamentarians in Britain (currently sitting as the Independent Group, aka Tiggers), and will probably field some of the most interesting candidates for the European parliament. That will fire up media and voter excitement, to counterbalance the brouhaha around Farage’s Brexit party. But Change UK (aka the Chukas, a hat tip to one of its leading members, Chuka Umunna) does not have anything like the nationwide electoral machine, or ground army, of the Liberal Democrats, and its emergence will further fragment the pro-European vote.

You might think that doesn’t matter, because this is a proportional representation poll. Unfortunately, the d’Hondt system of PR used in Britain favours larger parties over smaller ones (more so – bonbon for nerds — than the rival Saint-Laguë method). Britain is divided into electoral regions for these elections, and the smaller the region, the stronger that distorting effect. It’s scant consolation that there will be a similar split between Ukip and the Brexit party.

If Labour is not clear enough, then turn to the Lib Dems, Change UK, the Green party, the Scottish National party or Plaid Cymru.

There is still some room for tactical voting, with voters gathering behind the strongest pro-European party in a given electoral region. Pro-European parties could even have a tacit division of labour, one devoting more resources to this region, another to that. But the practical effects of such manoeuvres are likely to be small. So the crucial thing is to focus less on the parties than on the shared cause. Forget the seats, look at the votes. Since this is effectively a referendum, only two numbers count: votes for, votes against.

Electoral turnout in European elections is usually low. Last time it was 35.6% – by no means the lowest in the EU – with some 16.5 million people voting. This year the European poll doesn’t coincide with any other elections that might take people to the polling station anyway. Many moderate pro-Brexit voters will feel that it’s pointless to turn out, since we’re supposed to be leaving the EU. Against that, ardent Brexiteers and ardent Europeans will be fired up as never before. Perhaps for the first time ever, this European election is actually about Europe.

The first thing to do is to get registered. The deadline is less than three weeks away, on 7 May. The electoral commission recently tweeted that one out of every three 18- to 34-year-olds is still not registered to vote. Students and young people: your future is more at stake than anyone else’s. Register.

Well over 1 million UK citizens live in the rest of the EU. So long as you haven’t resided abroad continuously for more than 15 years, you can still register to vote at your last place of residence in the UK. But this can be complicated, and there are only days to get it done. UK citizens living anywhere else in the world should get themselves a postal or proxy vote.

Don’t bet against the Brexit party winning the EU elections

Then there are the more than 3 million citizens of other EU countries living in Britain. Even if you are on the electoral register, you have to fill in and return a form saying you want to vote here rather than in your home country. Anachronistically, this can’t be done entirely online, although my local election registrar tells me they will accept a scanned and emailed copy. Irish people resident in the UK are entitled to vote so long as they are on the register, as are qualifying Commonwealth citizens.

Then we need a massive ground campaign to get out the vote. The European parliament has an excellent website, where you can register, volunteer and find events. Activists in all the pro-European and pro-referendum movements, from the revitalised European Movement to the youthful For Our Future’s Sake and Our Future, Our Choice (OFOC), have an important part to play, as do the pro-European parties. For all the fascination with Facebook, targeted advertising and digital influencing, seasoned campaigners tell me that the biggest difference in such elections is still made by people knocking on doors and old-fashioned paper direct-mail shots. This is expensive, so if you have any money to spare, give it to the organisation or party you think will have the biggest impact. For what it’s worth, I’m particularly impressed with the Lib Dems’ digital and physical campaign preparations, but they are short of moolah. And we can all give our time.

The BBC will have to do a lot better than the initial jeering of John Humphrys on the Today programme, treating these European elections as if they are a farce. Our great public service broadcaster’s seriousness and due impartiality is in question. Meanwhile, thousands of other journalists, here and across Europe, are just waiting to write the day-after story as “triumph for Farage’s Brexit party”. With our feet, our voices and our votes, we can tell a different story.

Sorgente: Britain will have its second referendum – at the EU elections on 23 May | Timothy Garton Ash | Opinion | The Guardian